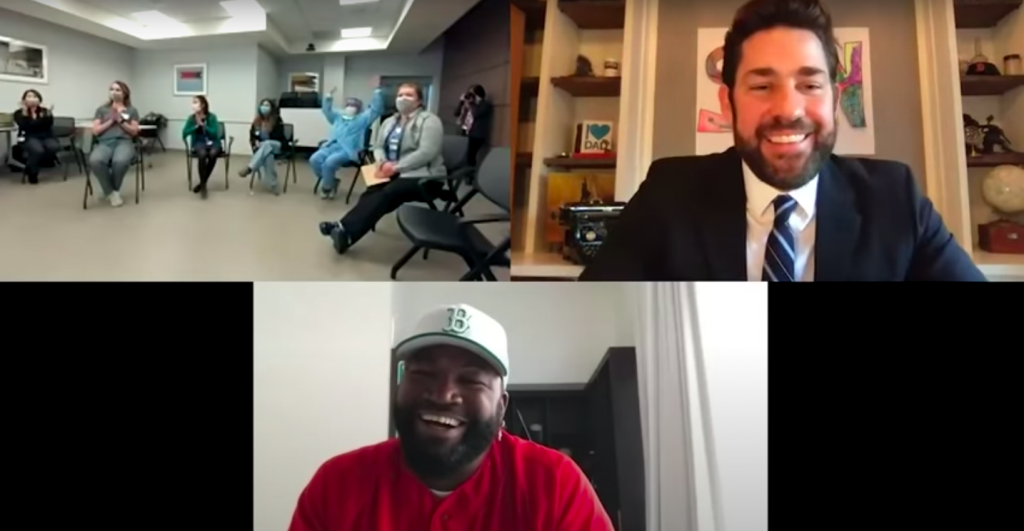 John Krasinski and his talented family released the third episode of their now beloved YouTube series Some Good News yesterday, and, spoiler alert, it was just as charming as the previous two episodes. After managing to get the entire original cast of Hamilton together for episode two, Krasinski was back with a new episode that featured another look at the heroic healthcare professionals fighting the spread of COVID-19. Krasinski and his nimble production team (which includes his super-talented wife, Emily Blunt) managed to tie in another epic cameo in the form of former Red Sox superstar David Ortiz and the entire Red Sox team.

HUGE thank you to each and every one of our #HealthcareHeroes and to @RedSox and @ATT for making episode 3 of @somegoodnews such a special one! https://t.co/6Xo4opHjpm

The Red Sox were on hand to delight a bunch of nurses and doctors that Krasinski managed to send to Boston’s historic Fenway Park, where they were given a standing ovation from the Sox and a saw a thank you for their efforts on the jumbotron. If it gets a little dusty in your apartment or home while watching this bit, you won’t be the only one who had to wipe some tears from your eyes.

Krasinski also pokes a little fun at himself over his now well-documented audition for Captain America. As you and just about everyone else knows, the role went to Chris Evans. Krasinski’s done okay for himself, regardless.

It’s yet another heartwarming episode of what has become one of the most reliably reaffirming places to feel just a little bit better about the world. We’ve re-embedded the YouTube link here:

Good Deeds Give us Reason to Hope (And Applaud)

Featured image: Nurses, doctors, and none other than David Ortiz himself were featured on the third episode of John Krasinski’s ‘Some Good News.’