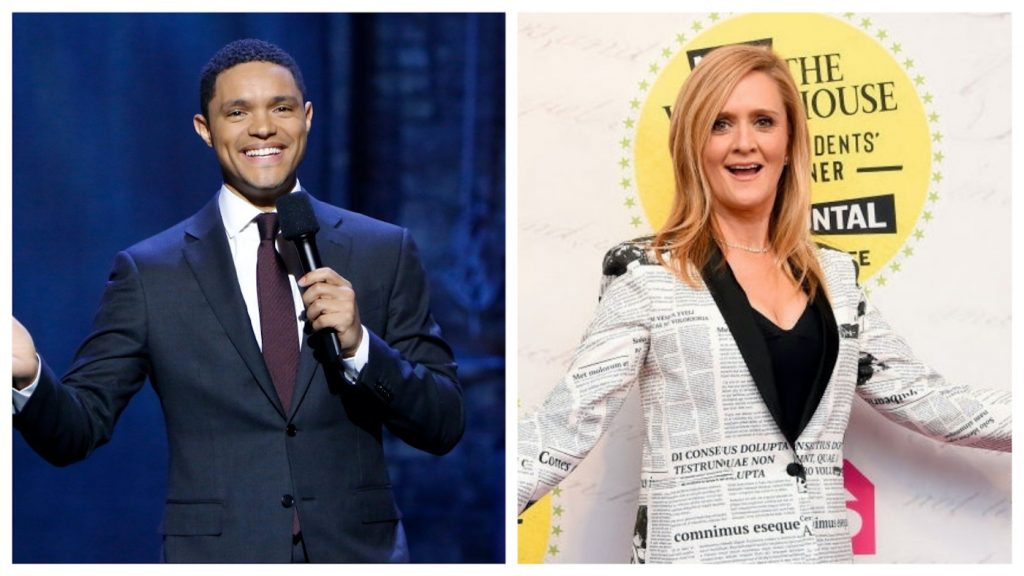 As the spread of COVID-19 stalled productions and delayed film premieres, you could make a case that the most visible manifestation of the global pandemic on the entertainment industry was the lack of late-night TV shows. Starting around mid-March, every single one of the late-night programs, from The Late Show With Stephen Colbert to Full Frontal With Samantha Bee to Conan, went dark. The folks that millions of Americans invite into their living rooms and bedrooms every night, some to make sense of the blizzard of news, some to simply have a few laughs before bed, were practicing social distancing like the rest of us non-essential employees. Until they weren’t. No audiences. No green rooms. No live guests. Yet late-night TV is back, with the shows now airing from the living rooms and homes of the hosts themselves, put together by their nimble crews, iPhone cameras, and game (and remote) interview subjects.

The new, stripped-down shows are intentionally and unavoidably comically different from their previous iterations. Gone are the lavish production values, the excellent house bands, the meticulously crafted segments, and, of course, the in-person celebrities. Now, hosts and their crews are reinventing how to produce their shows on the fly. Take the popular, routinely hilarious segment “A Closer Look” on NBC’s Late Night With Seth Meyers. Meyers used to read this often exquisitely written segment from cue cards, now, he’s using teleprompter software that was downloaded onto his devices.

It hasn’t been the smoothest process, for Meyers, his fellow hosts, and their hard-working crews, but their game attempts are winning. These are massive studio productions suddenly trying to adapt to YouTube-style aesthetics, and quick. As Mike Shoemaker, an executive producer of Meyers’ show, told the New York Times’ Dave Itzkoff, “YouTubers are saying, ‘Dude, your lights; your sound. Of course YouTubers are good at this. We’re not good at it.”

Yet the shows they’re producing are good, even if the aesthetic is way more your neighbor’s YouTube channel on home brewing than Jimmy Kimmel’s “Slow Jam the News” or James Corden’s “Carpool Karaoke.” The attempt to keep delivering both comedy and useful information during this pandemic, regardless of how slick it looks, has been entertaining and enlightening.

Although the pre-pandemic shows and their new, minimalist versions still largely rely on the personalities of their hosts, what we’re seeing now on late-night feels simultaneously charming and raw. And also historic. Watching Colbert perform a monologue from his bathtub in his South Carolina home (in a full suit), or Bee broadcasting from her home in upstate New York (while chopping wood), or Trevor Noah interviewing Dr. Anthony S. Fauci on March 26 in a widely-seen, highly informative clip that currently has nearly 11 million views, late-night feels more personal, and more necessary, than ever before.

Late-night has always been a place where the real world and its occasional, unavoidable horror was processed and discussed by hosts who hold a unique place in our society. These shows reach a huge swath of the public, from college-age students to retirees. For the 2018-2019 seasons, for example, The Late Show With Stephen Colbert averaged 3.67 million viewers a night. During times of crisis, most memorably after 9/11, hosts from David Letterman to Conan O’Brien to Jon Stewart took to the airwaves to express their fear, their heartbreak, and their hope for the future. Their raw, human reaction to an event that had captured the attention of the global community was a salve for many.

That is true now more than ever. The spread of COVID-19 is the rare event you can say is truly unprecedented. And today’s hosts and their hard-working crews are putting in a ton of hours, remotely, to deliver their shows to an anxious public. Molly McNearney, the co-head writer and a producer on Jimmy Kimmel Live (and also Kimmel’s wife), told the Times’ Itzkoff that it took three hours to shoot six minutes’ worth of his monologue. “Just trying to get his eye line correct took forever. He’s used to having a teleprompter guy and a team of 140 people helping him there.”

Their efforts are worth it. Late-night has been altered, along with the rest of society, yet it remains a hilarious, and often very helpful release valve for the innumerable anxieties we’re amassing throughout the day. While real-life heroes are out on the frontlines of the pandemic, working in hospitals and clinics, delivering food and medicine, our late-night hosts and their crews are doing their part. When they eventually return in their fully produced, studio-shot forms, the experience, and the spirit of these stripped-down productions, will carry on.