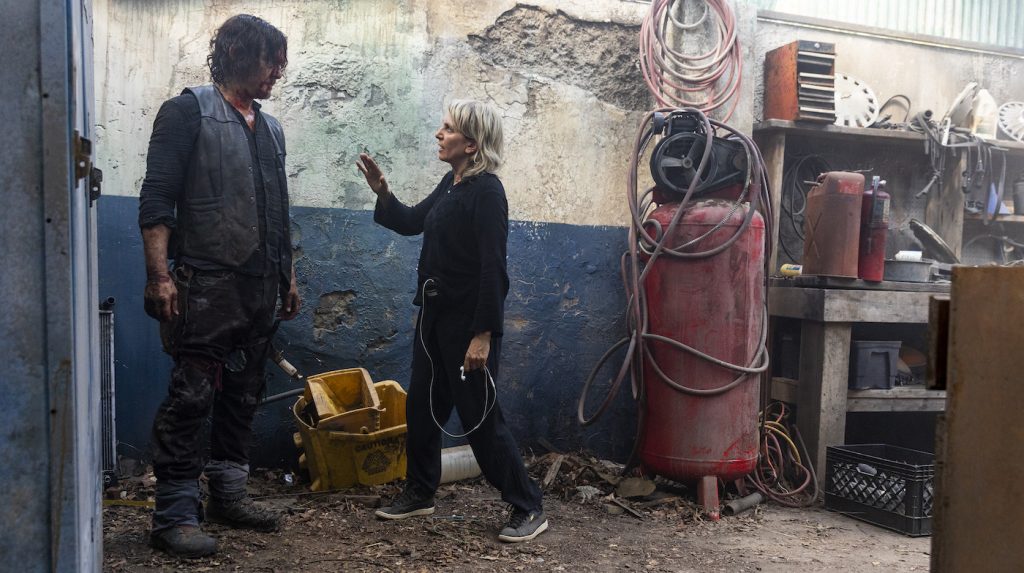 “For the two months leading up to this moment, I was writing. I was already leading an isolation style life,” says writer/director Bronwen Hughes. Her usually intense TV directing schedule had this lull so she could complete a screenplay for a feature (a spy thriller she’s sending off to a major studio, she’d say no more), and then the world changed.

“Well, every physical shoot I’ve had or have, booked or about to book, was wiped off the map,” she said about the impact of COVID-19 and the subsequent production shutdown the pandemic has caused. “They said we were postponed in the early days, but we kinda knew even then. The kind of work we do, generally, there is no such thing as paid sick days for a shoot that hasn’t begun yet. That’s what freelance work is about.”

Hughes has done a lot of freelance work in the past year before the novel coronavirus wreaked havoc on the entertainment industry and every other industry in the world. Her current job concerns are more broadly for everyone who works in the entertainment industry and who can’t afford a massive stoppage of work without help. “What I think about are all the working people, which includes freelance work, whose livelihoods are wiped out right now. They need help.”

Hughes started working in film, but her TV career has not only proven steady, but it’s also been creatively fulfilling in ways she probably couldn’t have dreamed when she started out. It helped that she joined Vince Gilligan and directed the sixth episode of the first season of a little show called Breaking Bad. Since then, she’s directed some excellent drama series, including The Good Doctor, Berlin Station, and most recently, Gilligan’s Breaking Bad follow-up Better Call Saul and the juggernaut zombie series The Walking Dead (which has just delayed its season finale due to the novel coronavirus.)

“The great joy of television is that every month if I’m fully employed, I’ll get to try something completely different from the last round. That’s so invigorating, it’s such a fantastic playground to draw on my entire vocabulary,” Hughes says. “My job is to determine what the story needs, what kind of visceral emotion is the goal, and figure out what film language I need to communicate that. Framing choices, camera operating style, the pace of the performance, the lighting, what not to show you, what I have to show you, all of these choices in film language are what my daily decision making is based on.”

Better Call Saul and The Walking Dead are, obviously, drastically different shows. The former focuses on the lovable, morally flexible lawyer Jimmy McGill (Bob Odenkirk) before he became the fully crooked Saul Goodman in Breaking Bad. The latter is nominally about zombies—but really, more to the point, about what people become after their world is rendered unrecognizable by a plague.

“Starting with Better Call Saul, that is a very specific tone,” Hughes says. “In fact, that’s the most specific aspect to the Vince Gilligan and Peter Gould (a director on Saul and Breaking Bad) universe. I did the first season of Breaking Bad, and we worked to find this buoyant, wild ride between the great fun and the boldness, to locate the true stakes and the true danger that lies on the other side of the coin. That’s what we’re doing here. To find that tone is a tightrope. If you go too comedic, then it ends up becoming a broad comedy, and nobody worries about the character. If you go too dark, then the audience is in a state of dread and can’t really enjoy the wild ride. So you’re in this tightrope walk to find the light and the dark.”

For The Walking Dead, a state of dread is the standard operating procedure for the poor souls trying to hack their way through the zombie apocalypse. After directing Better Call Saul, Hughes traded Jimmy McGill’s offbeat world for the swamps of Georgia. “I’m traipsing through the snakes, scorpions and biting flies to shoot The Walking Dead, and this particular episode came with a very specific goal from showrunner Angela Kang; to find this sense of dread in the tension of what will happen when Beta (played by Ryan Hurst) penetrates the walls of Alexandria.”

Hughes created a poster-worthy moment, per Kang’s brief, when a hand bursts out of a grave. She built the episode around this startling, iconic zombie image. “That was the briefing that informed the rest of my entire job, to find these strong images and making sure they resonated. Things like Beta sitting in a meditative guru pose surrounded by the newly killed townspeople as he waits for them to reanimate into walkers,” Hughes says. “Or finding the dead bodies on the road, and we pan above them and find the pools of blood in the dirt. It’s a graphic image and you get the entire story in one frame. We weren’t shying away from these classic horror images.”

Back to the real world, I asked Hughes what she thinks about the images we’re all seeing on our TV and computer screens now, images that often seem like they’re coming from a TV series or a movie; an empty Times Square; Los Angeles without any traffic; the images of exhausted nurses and doctors pleading for supplies.

“I think visually, you’re seeing these real-life images that visual effects teams are usually in charge of producing, like an empty New York City,” she says. “The other parallel, the one I hope we pay attention to, is that most of the writing of these post-apocalyptic stories deal with how people come together to thrive and survive, or, decide that dividing and conquering is the way to go. Those are the cautionary tales in the arts that we should be thinking hard about right now. How do you get through this? How you find common ground?”