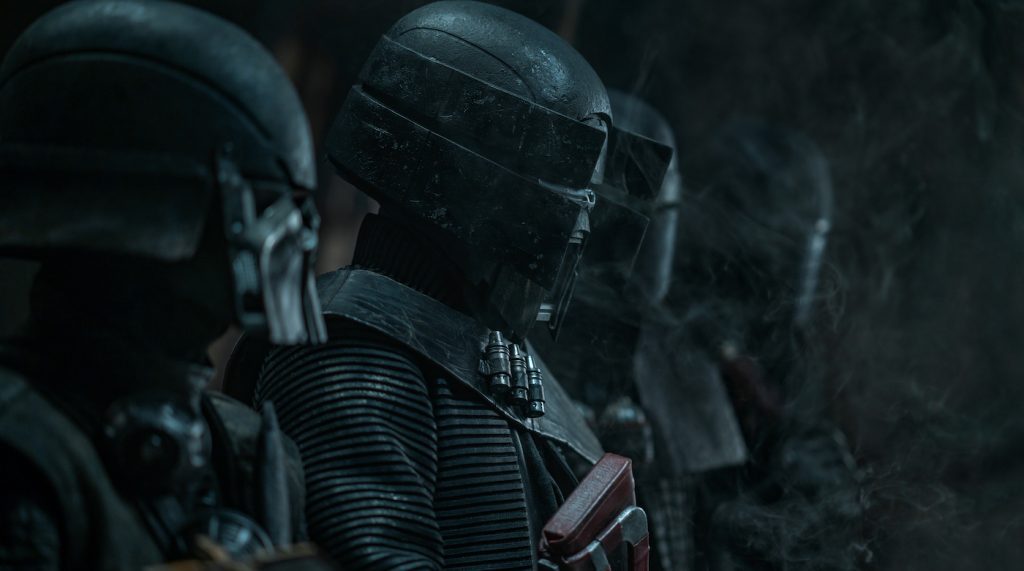 We are rapidly approaching the 9th and final installment in the Skywalker Saga, folks. Star Wars: The Rise of Skywalker hits theaters in a mere 11 days! There has been a deluge of material from Disney in the past few weeks giving us a ton of TV spots to parse. Now, they’ve kindly released a batch of 8 new photos. Some of these have been seen previously in various exclusives from Entertainment Weekly and the like, but getting them all in one shot is helpful. The highlights are the images of Keri Russell’s mysterious Zorii Bliss and the even more mysterious Knights of Ren.

The Knights of Ren were briefly seen in J.J. Abrams 2015 The Force Awakens, but they were unseen and unmentioned in Rian Johnson’s The Last Jedi. We have no idea what role they’ll be playing here, and whether they are, as their name implies, a kind of paramilitary force used exclusively by Kylo Ren (Adam Driver). Or, perhaps, they’ll have a bigger role to play than just being Ren’s black-armored henchmen. We shall see.

As for Keri Russell’s Zorii Bliss, we know that she has a history with Poe Dameron (Oscar Isaac), and we see the two together in one of the photos below. We’ve also got shots of Rey (Daisy Ridley) in a forest, the return of Lando Calrissian (Billy Dee Williams), and Rose (Kelly Marie Train) and Rey together. Then there’s a great shot of most of our heroes all together listening to something C-3P0 (Anthony Daniels) is saying.

Check out the photos below. Star Wars: The Rise of Skywalker hits theaters on December 20, 2019.

For more on Star Wars: The Rise of Skywalker, well, we’ve got a lot. Check out Rey rocking the double-edged lightsaber, glimpse these four new photos (including the flying Stormtrooper), watch this clip of Leia holding a lightsaber (and more), or this clip of flying Stormtroopers, read about Lucasfilm president Kathleen Kennedy and writer/director J.J. Abrams meeting with George Lucas, watch the Knights of Ren and a Sith Trooper in action, behold the new character posters, read this helpful Star Wars timeline, watch the latest TV spot, read our breakdown of the final trailer, watch the final trailer itself, read our break down of a bunch of new images, and a have look at Rey and Kylo Ren (Adam Driver)’s complicated relationship.