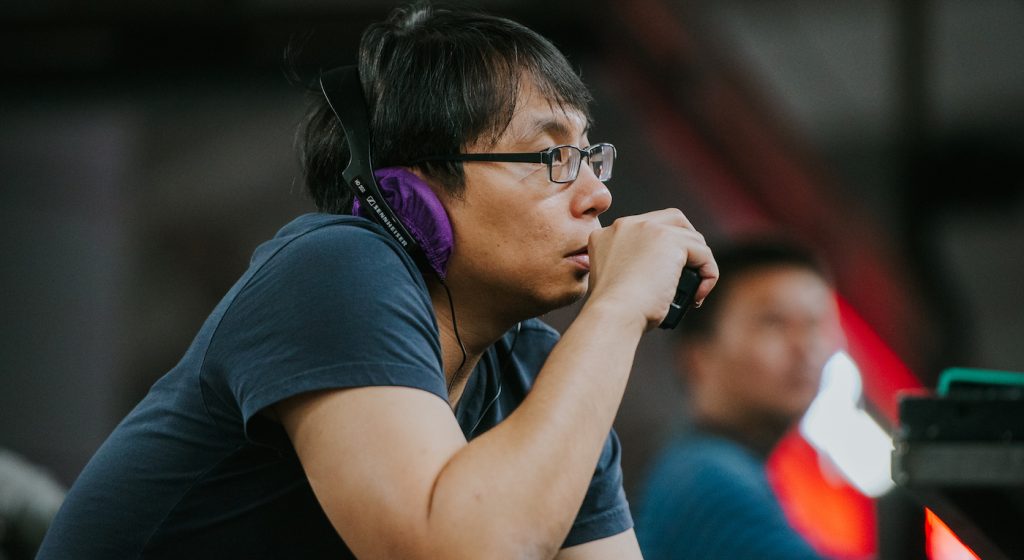 JD Chua had the distinction of being director Michael Mann’s only intern when he was in Hollywood, the man who made, in a seven-year period, three of the best films of the 1990s—The Last of the Mohicans (1992), Heat (1995), and The Insider (1999). As a child, one of Chua’s favorite films was Mann’s The Last of the Mohicans. “I remember immersing myself in the laserdisc,” he says. “I didn’t care too much into knowing who the filmmaker was back then.”

Eventually, Chua would care. In fact, he’d seek Mann out in an intrepid, admittedly bonkers quest that ultimately paid off. Chua ultimately worked with Mann on Blackhat and powerhouse producer Jason Blum on Dark Skies. Chua returned to Singapore, where he directed the country’s very first creature feature, Circle Line. Then, like everyone else on the planet, Chua had to face a different kind of monster—the novel coronavirus—which caused an unprecedented global shutdown to the film and TV industry (and to so many other “non-essential” jobs). Suddenly Circle Line‘s May release was not happening.

We’ve been talking to creatives all over the world to find out how they’ve been handling the stoppage in work, making the most of their quarantine, and their hopes for the future. Those interviews have included chats with Indonesian director Kamila Andini, Korean film critic Youn Sung-un, Indian filmmakers Tannishtha Chatterjee and Priyanka Singh, Filipino filmmaker Keith Sicat, and Thai filmmaker Nirattisai Ratphithak.

Today, we speak not only to Chua about his creature feature and how he’s handled his quarantine but to his producer Juan Foo, who schools us on what it’s like making films in Singapore. This conversation has been edited for length and clarity.

JD, tell me about your background—how did you get into filmmaking?

I always think getting into any world is all about accessibility. Growing up, I was surrounded by movies. The foundation was built young for me. My parents love the movies, especially the serious ones. My earliest memories are of watching The Last Emperor in the cinema. I didn’t understand why they stuck a pearl in the Dowager’s mouth and the scene stuck with me. My father loved gangster films, and my mother loved musicals.

And which films were seminal for you?

During my formative years, I was drawn to the spectacle of Independence Day, Broken Arrow and Eraser, movies with loud explosions, and clear protagonists and antagonists.  Soon I matured into movies like Se7en, Bullitt, Silence of the Lambs. When Heat came along on VHS rental, I remembered being floored by it. Again, I didn’t know who made the film. Then, I saw one of my favorite films, The Insider. By then I had the Internet so I came to recognize one of my heroes, Michael Mann. By the time Mann’s Ali hit the screens in 2001, I became his diehard fan. I studied how his films were made and the people he worked with.

Little did you know at the time you’d end up interning for him.

After graduating from film school, everybody was eager to make their next big project, aiming to win awards and recognition. I had a path to choose: make a film I want to make by pretending to know what I do not know, or travel and learn from the people who inspired me. I chose the latter. I actually flew halfway around the world to track down my hero Michael Mann to ask for an internship. I had very little resources, but it’s a risk I took because I knew that this is exactly what I wanted. It took me several weeks to find him, and I managed to persuade him to take me under his wing. Thinking back, I must have been truly insane. As a kid watching his films, I never thought a couple of decades later, I would work in his projects.

I’d love to hear about some of your early work in film. How did you become a better filmmaker?

I believe having an ethical and strong character is important in being a better filmmaker. You’ll be better equipped to take risks and be daring enough to venture into the uncharted world. There will be actions where people will label you as insane. If you’re capable enough, you’ll spin it around and label yourself as driven. And this is also how you can contribute to your surroundings. Also, be good to the people you work with, genuinely, and don’t treat them as simply a step to your next aspiration.

Juan Foo, tell me about the Singapore film industry and what Circle Line‘s future looks like.

Juan Foo: The film industry here is like the Wild West. Anything goes, and if you succeed, you can be king for a few days. Flexibility over structure (read: no unions). It’s a small, closely-knit community trying to find their way around making films that culturally resonate, but also making commercial hits that can put Singapore on the movie-making map. The scalability of films and talent is a constant challenge. Filmmaking processes are available and comparatively affordable, but trapped in the ‘guerilla-indie’ production quality. There are some filmmakers who have a taste of big productions from working on Crazy Rich Asians and Westworld, which were partially shot in Singapore, and they’ve huge withdrawal symptoms after being part of those films.

They lament the gap in the budget and scale they had. Mostly, talented filmmakers survive with television work, corporate work, and commercials. A handful of filmmakers work solely in long-form. Funding is available at a very cursory level because the ecosystem of box office receipts sustaining studios is not mature yet. Many interesting cross-cultural stories that I believe are commercially viable exist, but a lack of producers and a small market limits greenlighting.

How are you handling the release of Circle Line now that it’s been delayed by COVID-19?

There was so much excitement and anxiety for Singapore’s first attempt at a monster-creature film. We did a pre-release teaser drop at Comicon Singapore last December to drum up momentum for our May release and we were on the clock to try to finish it on time. But COVID-19 happened and everything kind of stopped. We’re still seeking a good release date for the film among the Hollywood blockbusters edging us out and the Chinese films reserving the next pecking order.

Looking on the brighter side of the situation, we now have more time to refine and improve the film, and the delay also gives us some time to maneuver some longer-term plans of marketing and sales, which are crucial for any movie.

Do you think this pandemic will change the way you work? Or change the industry?

The pandemic has re-aligned some fundamental priorities. More thought processes in pre-production will now include more risk management considerations and anticipating and addressing problems. More emphasis on safety, and personal hygiene measures, which I think were taken for granted or dismissed as hassle.

Whether it changes the industry adversely, in terms of economics, I think that will be reliant on responses to the waves of the virus as it traverses the globe. There must be a concerted effort by everyone to take action and prevent the spread. I hope cinemas still will be something we look forward to patronizing. At the heart of all of this is telling and sharing stories with each other. Being a producer more on the development spectrum, this time-out from the daily grind also allowed me to go back to reading and ruminating on stories, historical events, and digesting them into materials that we can use for creative work. It also gave me some ‘me’ time to think of the future and what’s ahead. Development time is so crucial and often so absent that it literally took a circuit breaker to reign us in and allow us to reflect and recompose. Whether this pays off in the long term will remain to be seen, but time to sharpen stories is always valued.