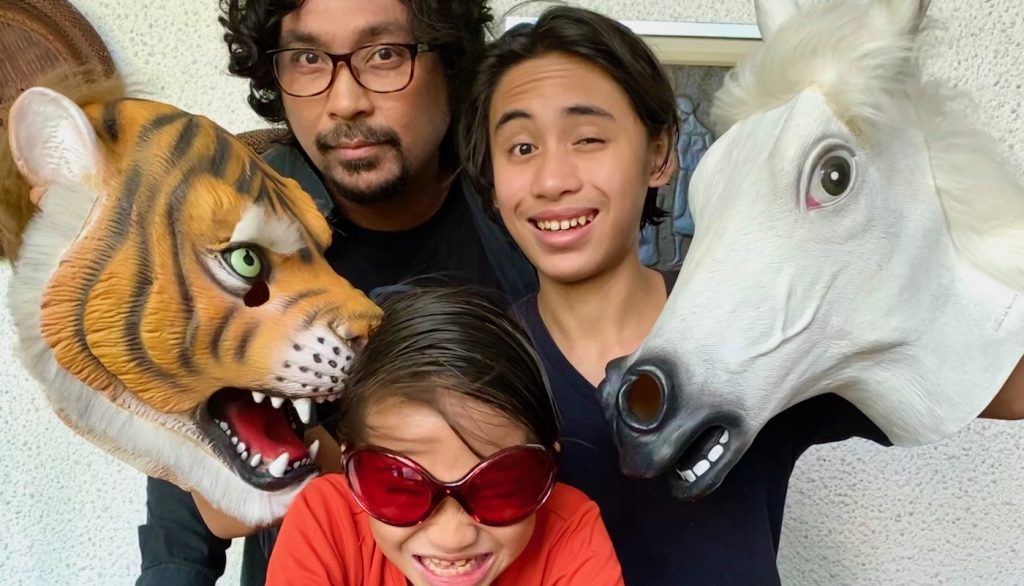 “The beautiful thing is, you have to keep occupied right?” So says Filipino writer/director Keith Sicat, speaking from the six-week-long lockdown in Manila.

With three projects primed to go into production at the beginning of the year, Sicat now spends in time between project development, teaching filmmaking, and keeping his creative juices flowing on mini-projects with his young sons. “We started animating his toys, doing stop motion stuff around the house. It was something really fun and it was creative. It didn’t come with the pressure, or the attachment, or the baggage of my professional work.”

Sicat was shooting day one on a new documentary with his co-director and spouse, filmmaker Sari Dalena, celebrating the 70th anniversary of a pop culture trend icon unique to in the Philippines – he can’t reveal the title for giving too much away – when the pandemic closed everything down, and Manila was put under strict Don’t Leave Home measures. “It’s very real. We know actors and filmmakers and crew who have passed from the virus.”

For the close-knit Filipino screen community, staying home did not equate to stopping work. Friends set up the Lockdown Cinema Club to help raise funds for the many freelancers that make up the industry. Filmmakers shared short films and screenplays, asking viewers to contribute whatever they could spare. Says Sicat, “I contacted the producers about the last sci-fi film I made Alimuom (Vapours) and asked if we could make it available.” The producers backed the request, and as of April 22, the initiative had raised USD $75,000 (3.8 Million Pesos) for filmmakers in need.

Mirroring many screen communities around the world, Sicat has monitored a flurry of correspondence between industry guilds and government agencies looking at devising a protocol to help production get started – the Film Development Association of the Philippines recently hosted a scheduled one-hour video-conference call that stretched to five. In Sicat’s mind, the idea raises more questions than answers: “Do you take everyone’s temperature every morning? How do we replot scenes (with social distancing)? Do you scale down to just a skeleton crew? How do you sanitize an entire set? Do you put in place shifts for lunch breaks?” Many are eager to get back to work, but there are others, including Sicat himself, who are fearful to resume work too soon.

Sicat continues to teach a weekly production class, moving to Zoom and Skype during the lockdown. Adaptation is the name of the game. “We’ve come up with really fun ways to do it. Let’s say you don’t have any camera equipment – so use your cell phone! Let’s say you don’t have access to Adobe Premiere or Final Cut Pro – how about you make a still frame film?” Sicat says he’s been inspired to see students, all of them digital natives, go back to basics. There’s a great lesson, he says, in sharing with his students that the battle is won in the preparation. “In terms of getting people to rethink the process, if there’s anything that this pandemic is showing us, is that those who succeed are the ones with the plan. If you have a plan, you might just make it to the other side!”

Sicat knows about having a plan and making it work. He’s been an award-winning independent filmmaker, concepts head, and comic book creator whose films have screened in the Philippines and at international film festivals. He was runner up in the MPA-FDCP Feature Film Pitch Competition in 2019. And Sicat’s giving back with his film Alimuom (Vapours), which is now raising funds for film industry workers in the Philippines. The film is set in a future where farming on Earth is outlawed due to the toxic environment and all agriculture is produced off-world. In Sicat’s film, despite the ban, some scientists and farmers resist.

Featured image: Keith Sicat and his sons making the most of their quarantine in Manila. Courtesy Keith Sicat.