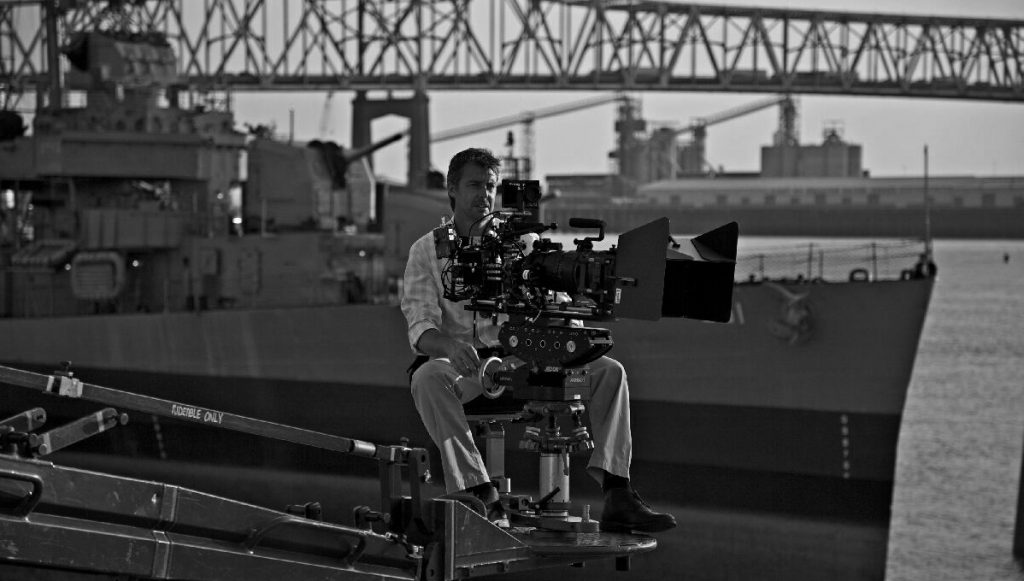 Cinematographer Andrew Strahorn recently took part in our first ever Film School Friday event, in which he joined Stacy Osei-Kuffour, a writer on HBO’s stellar Watchmen, composer Brandon Campbell, whose work includes Game of Thrones, and actress Tamlyn Tomita, who recently starred as Commodore Oh on the critically acclaimed Star Trek: Picard. Strahorn himself had been a very busy man, lensing shows including FOX’s Lethal Weapon and 9-1-1: Lone Star and AMC’s Fear the Walking Dead. Then the COVID-19 pandemic hit, and production halted on TV series and films around the world. Like millions of other people in non-essential jobs, Strahorn suddenly found himself with time on his hands.

“What’s really interesting for me is, as the head of a department, you have a lot of people who work really closely with you,” Strahorn says of the sudden stoppage of work. “When you crew a job, you ultimately determine who the key grip, gaffer, and operators will be. These people become very close to you. On Lone Star, we did up to six months together, and it’s a very demanding show. You become very connected to these people, so it’s tough to see them asking about news from the studio. Lone Star is scheduled for 18 episodes for season two, and this is their livelihood. Everyone’s providing for their own families. This weighs heavily on me as the head of a department. I want these people to be safe. I want them to be okay.”

Originally from Australia, Strahorn always knew he wanted to work in the film and TV industry, so naturally, he gravitated towards the first job he could find behind a camera (of sorts)—he became a projectionist in Australia. That led to asking, and receiving, advice from cinematographer Don McAlpine. Eventually, Strahorn was being honored by his home country with an Australian Cinematographers Society award for his work on the film Undead. He eventually relocated to Los Angeles where he was steadily working, shooting everything from a firefighter’s life in Ryan Murphy‘s Lone Star to the survivors of a zombie plague in Fear the Walking Dead.

“For me, I’m a workaholic, so I’ve never had this stretch of time not working,” Strahorn says. “The first week off was great because I needed it, but since then, what’s interesting is the hours we do, you might end up pulling 80 hours a week, you spend a lot of time away from loved ones, so now I’m touching base with my people. I go for a walk every day, I’ve never seen the air clarity as I have now after 15-years in Los Angeles. We’re seeing things way more vivid then we’re used to.”

On the frozen industry front, Strahorn is philosophical about what’s to come. He stresses that the most important thing will be figuring out when it’s safe to slowly return to work, and then, how to work in a way that’s both cautious and efficient. “The industry will be back. What will it entail? I wouldn’t be surprised if it’s a slow roll-out,” he says, “Like, okay, what are our bread and butter shows? Let’s roll out two or three of those on our backlot. Let’s see if there are any spikes in the next three weeks, and if not, they could roll out more shows. We all want to get back to work, but safety is a major concern. We need to all be safe in the environment we go back to. There’s going to be a lot learned in the next couple of weeks and hopefully, these growing pains will be beneficial.”

One production that’s slowly getting back to shooting is in Starhorn’s home country—the venerable Aussie soap Neighbors is starting to film again. Strahorn says it could be a good template going forward.

“Their guidelines are very interesting,” he says. “Now scenes are written without characters touching, no intimate scenes, no scenes with characters within six feet of each other. The crew can wear gloves, facemasks, we can do our work, but the questions remain for our actors and costumers and makeup artists—how do they all operate in proximity to each other? We all want to get back to work, but what does it entail?”

Strahorn is curious whether, at least to start out, certain departments within a production will limit their teams. Will craft services become delivery drop-offs? Will studios need to lock in a set number of hours per day, rather than the usual, often very long workdays?

“There’s a lot of smart people using their time trying to ascertain how this looks, how do we do this?” Strahorn says about the various production studios all over the world, and especially in Hollywood. “I think following Neighbors, and China is opening their film industry, hopefully, there will be communal lessons to be learned, what looks successful and what doesn’t.”

Strahorn is used to working on very large shows, often on location, where lots of people are together. This is especially true for an epic undertaking like AMC’s zombie extravaganza Fear the Walking Dead, the prequel spinoff to their long-running series The Walking Dead. This includes not only the large ensemble cast, but the special effects makeup artists who are necessary to create and maintain all those zombie extras, and the wardrobe people, and the folks doing touch-ups on actors makeup and costumes throughout a shoot, to say nothing of the art and production design departments, the PAs, and Strahorn’s crew of technicians and operators and gaffers and grips. “What will all this look like going forward?” he asks. No one quite knows right now.

“I think it’s going to be funny to go back to 12 or 14 hour days,” Strahorn says. “The muscle memory of getting back to that, it’s a heightened state of being. We’re kind in a heightened state right now, but it’s different from when you’re on set. This is frustration as opposed to adrenaline. I think a lot of people are finding out a lot of different ways of how you make the best of life. America is an amazing country, there are no two ways about it, and I feel privileged because I get to do what I want. My own country, which I love so much, I couldn’t have this same career. I think it’s going to be really interesting to make something positive out of this abundance of time. If your family members aren’t sick and you’re not sick, it’s not really asking that much from everyone. I’m in a different position than someone on my crew, financially. I was talking about work to my girlfriend, and she asked me to pause for three seconds and think about how lucky we are not to be sick. Whatever the new normal is, whatever that looks like, what steps we take moving forward will be important for everyone.”

Featured image: Andy Strahorn – Behind the scenes of 9-1-1: Lone Star