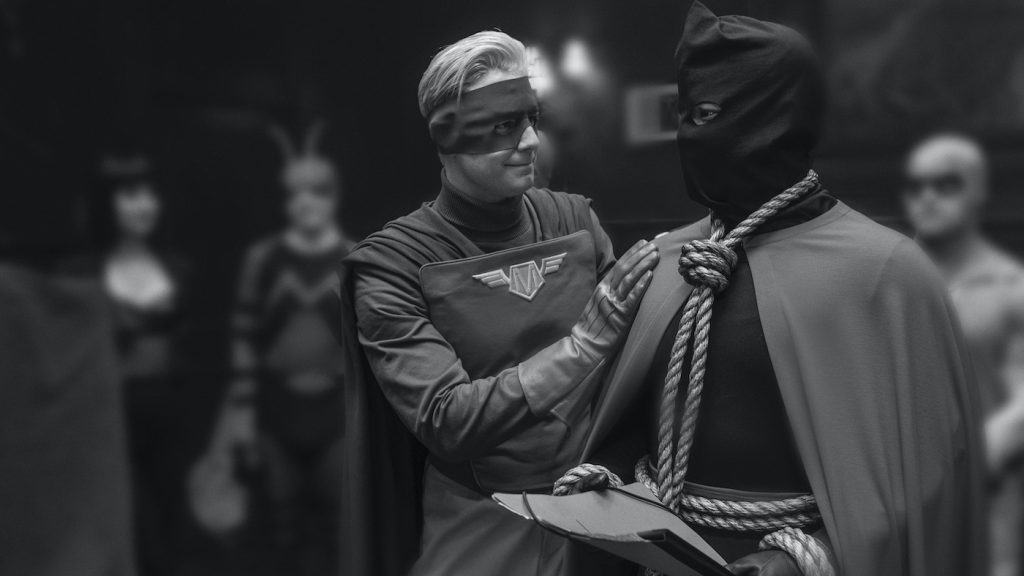 Now that Watchmen has made its glorious debut on HBO and confounded just about every expectation, we can say with confidence that Damon Lindelof’s adaptation of Alan Moore and Dave Gibbons iconic graphic novel is a remarkable testament to the original and a bold, powerful piece of original storytelling itself. The reason is Lindelof and his incredible team of writers, directors, actors, and crew hasn’t adapted the graphic novel itself, but rather used it as a launching pad to explore its themes and expand on them. The series is set in an alternate version of America that, nonetheless, features some of America’s most pernicious problems and ugliest history. Racism, white supremacy, and America’s blood-soaked past are explored with remarkable passion by Watchmen‘s talented team of creators.

Which brings us to this past Sunday’s sixth episode, “This Extraordinary Being,” which was the best thus far. It revealed that Angela Abar (the great Regina King)’s grandfather, Will Reeves [Louis Gosset Jr.], was the real Hooded Justice (not the white man everyone assumed he was), the first masked vigilante to fight back against the depraved villains, petty and grandly ambitious, plaguing the country. Written by Cord Jefferson and directed by Stephen Williams, “This Extraordinary Being” somehow managed to top the previous five episodes, each one of which remixed characters from the original graphic novel with real historical atrocities to create compelling, profound TV.

“This Extraordinary Being” once again recalled the 1921 massacre of black residents of Tulsa—the real historical event that is Watchmen‘s driving force—as seen through the eyes of the child Will [Danny Boyd Jr.]. The Klan, as well as everyday citizens, turn on their fellow black Tulsans and torch their businesses, shoot innocents, and drag people behind their buggies. It’s horrific. Will’s parents don’t make it, but he escapes to New York City, where he eventually becomes a cop. Only as a black cop, he’s not only powerless to stop white criminals from, say, firebombing a Jewish deli, he’s also powerless to stop fellow white cops from beating him and hanging him (they cut him down at the last second—this was merely a warning). Powerless, until he isn’t. Until Will turns the very noose the racist cops used to string him up into his talisman and becomes Hooded Justice, the first person to don a mask and take the fight to the bad guys. Suddenly, it’s the Klan and their lackeys being hunted by a masked figure.

The costumes—hoods, nooses, masks, and more—really make the man and woman in Watchmen. Perhaps never before has what a given character wears been more important in a series. Costume design, like every facet of making TV or film, is storytelling. In Watchmen, more so than any other series on TV, what a character wears is often their entire history. From Hooded Justice to Regina King’s Sister Night, a Watchmen character wears his or her history on their sleeves.

“Learning how the real Hooded Justice got his costume, it’s very emotional and plays into the backstory of America,” says costume designer Meghan Kasperlik. “We created and custom made eighty percent of the costumes in this episode. As a costume designer, it was a very fulfilling episode because it wasn’t only period clothes, wardrobe from the 30s and 40s, but historically recreating events that happened, including the riots in Harlem. I love this type of storytelling, showcasing something that maybe hasn’t been seen on TV before. To historically reference what happened in America, the 1921 massacre in Tulsa really happened, the Harlem riots really happened, to have those elements brought into the story is really special. And it also showcases actors giving absolutely brilliant performances.”

While “This Extraordinary Being” is black and white, one of the elements that immediately pop out at you while you watch the rest of the series are the colors. Gibbons and Moore’s graphic novel, which made great use of colorist John Higgins deeply saturated palette (especially yellow) has been changed quite a bit, and with great panache, for the small screen. The brilliant yellows, the color of Watchmen, are here (beat cops wear yellow masks, but the color pops up all over the place), but Kasperlik and her team have gone their own way.

“We definitely looked at the graphic novel, but overall we didn’t use a tremendous amount of those saturated colors,” Kasperlik says. “We’ve got a little more of a darker tone. Some characters will have an accent, the yellow plays in, and the Doomsday clock is very important, but we didn’t take the palette from the graphic novel. It was a tremendously encouraging experience because there was so much creative freedom, both from Damon and from HBO, which really allows you to go crazy and see what works.”

The list of what works in Watchmen is a long one, but it must begin with Regina King. As the emotional center to a sprawling, hugely ambitious series, King’s Angela Abar is one of the most inspired creations of all. A new character written for the show, Abar was, at one point, an unmasked member of the Tulsa Police. Then the initial wave of targeted assassinations against the police killed most of the force and scared the rest into retirement. Not Abar. Instead of quitting the force, she became Sister Night.

“I came on after the pilot so I adopted the costume,” Kasperlik says. “It already had an amazing clean line, which was a win in my eyes. It’s something that the audience would be drawn to, not just her performance but the way her costume is shaped on her body. When I came in I tweaked a few things because she has so many action sequences and there’s a lot of wear and tear. I tweaked the costume so the stunt person, and Regina, could move and do what they needed to do. I reshaped the hood slightly, it was falling back a little and we wanted it to stay up while she was running. I changed it to a softer leather, but I didn’t want the heat from the body to mold it to her head, so I put a layer of neoprene in the lining so it would maintain the shape, and it gave it that dome look. I’ve done superhero films as an assistant so I knew little tricks that could be helpful to the costumes.”

For Tim Blake Nelson’s Wade Tillman, also known as Looking Glass, Kasperlik had to figure out a way where Nelson could actually see and breathe within a mask that would later be enhanced by the visual effects department.

“Most of his mask is done with CG, but we did have a reflective lamé mask that was used,” she says. “When I came on I was working with the effects team and we put together a motion capture mask. Tim Blake Nelson was great, he always wore the mask when he was Looking Glass because he wanted to be able to feel the character, so we took out a small panel and put mesh in so he could see, but it didn’t affect the functionality for the effects team.”

Creating breathable, functional clothes is a must on any series of film, but especially on one where so many of the characters are in bespoke, masked costumes. One of Kasperlik’s many goals was to create masks that allowed the actors to actually speak so their dialogue didn’t have to be added in post-production via ADR (additional recording).

Another character Kasperlik adored working on was Jeremy Irons’ Adrian Veidt. One of the original characters pulled from the graphic novel, Irons’ Veidt has thus far been one of the series most intriguing, bizarre characters, caught in some kind of netherworld surrounded by his loyal staff of expendable clones. In episode 5, “Little Fear of Lightning,” Veidt dons a homemade spacesuit in an attempt to free himself from his bizarre manor-prison.

“He’s in this unknown world right now and trying to figure out where he is. He’s trying to launch himself into space, so we see him test out his launchpad with his clones,” Kasperlik says. “The first suit was made to test it out to see if they’d survive, which was created from found materials from the manor, including the buffalo he shoots on the manor grounds. All that was in the script was that it was a ‘buffalo spacesuit,’ so that’s what I made.”

“He’s a narcissist so I wanted the suit to reflect his narcissism, so the helmet has these golden locks. I wanted to make sure that the blonde hair was involved, and the brilliant owner of Ironhead Studios, Jose Fernandez, built this air filtration system in that suit so Jeremy could breathe, and the exhaust from the air filtration system comes out of the follicles in the gold hair. All these little details that might not be seen in the first viewing, more of this will come out if you watch it again.”

Watchmen airs on HBO on Sunday nights at 9 pm ET.