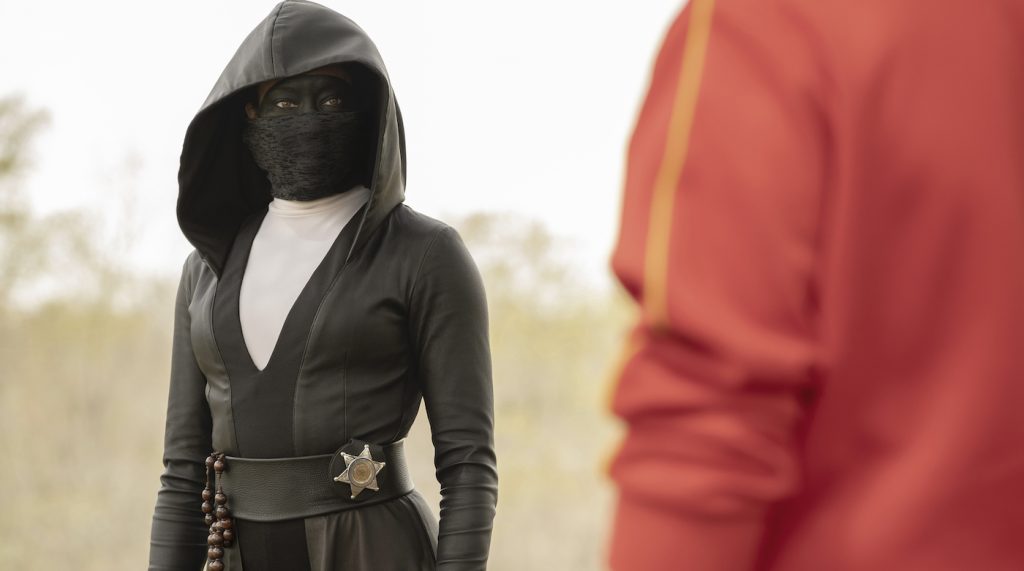 This is cool. One of the two original co-creators of “Watchmen,” artist Dave Gibbons, appears in a new video from HBO. Gibbons draws Regina King’s character from the premium cable channel’s hotly-anticipated upcoming adaptation—of sorts—of his and Alan Moore’s seminal 1986 graphic novel. (Not only is Watchmen hotly-anticipated, but it’s already earning rave reviews from critics.) Gibbons and Moore’s creation is one of the most beloved, hallowed graphic novels of all time. Damon Lindelof (The Leftovers, Lost)’s new series on HBO won’t be a direct adaptation of their iconic work, but a continuation of the story they began. Moore has been famously….ah, prickly when it comes to people adapting the book, so it’s nice to see Gibbons supporting the new series with his artistic imprimatur. In the new video, Gibbons draws Regina King’s character Angela Abar, a Tulsa police officer who starts wearing a mask after her family is attacked by vigilantes. Her masked persona is Sister Night.

“When I’m drawing a character, the most difficult thing to draw is the other eye,” Gibbons says in the video, as we watch him bring King’s character to life. “Because you have to make it match the one you’ve already drawn.” Gibbons goes on to say that in the series, King’s character is the one who really spoke to him. “She’s a wonderful character, with a great costume.”

It’s cool watching Gibbons take a character created by Lindelof and his creative team and give her life on the page. For the uninitiated, what you need to know is that, like the source material, HBO’s Watchmen is set in an alternate universe where superheroes are outlawed, Vietnam is a part of the United States, and the characters that survived through the pages of the original work are living in a very panicky, dangerous environment. The trailer revealed the aforementioned coordinated attack on the Tulsa police, and the subsequent decision by the police to start donning masks to protect themselves. Oscar-winner Regina King‘s Sister Night is one of the brand new characters in the Watchmen universe who will have a big role to play.

Among the original characters returning is the immensely powerful Adrian Veidt (Jeremy Irons), better known as Ozymandias. The last time we left Ozymandias in the graphic novel, he was living on Mars after having obliterated the story’s sleuthing weirdo hero Rorschach. Yet the masked detective had already sent his journal to the press, letting them know the full, grisly story of Veidt’s actions. The trailer revealed that an entire legion of Rorschach-like followers, inspired by his detective work and the crimes he exposed, is carrying on his legacy. Yet from the reviews, it sounds is they may have strayed far afield from Rorschach’s goals.