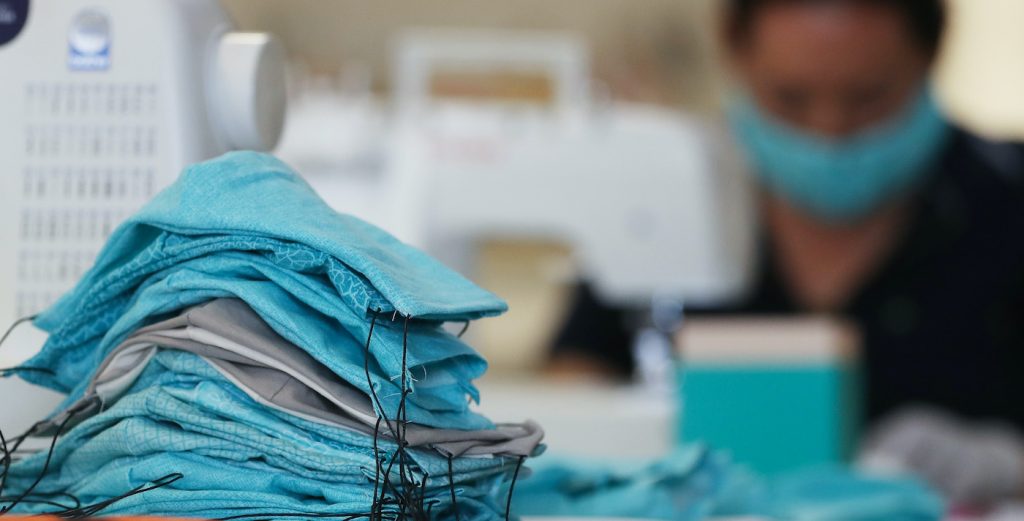 Seven weeks ago, costumer Nickolaus Brown expected he’d be spending this spring in Atlanta outfitting Dwayne Johnson and Ryan Reynolds for their Netflix action flick Red Notice. Instead, he’s now hunched over a sewing machine in his Los Angeles home, making masks for hospital workers. On a recent afternoon, Brown explained, “I’ve done eight so far and I’ve got twelve more to go, so it’s going to be twenty by the end of the day.”

Brown, who serves as president of the Motion Picture Costumers Union, teamed up in April with Costume Design Guild president Brigitte Romanov and 250 movie artisans to sew masks for nurses, doctors, senior citizens, grocery workers, homeless people and other pandemic front liners desperate for protection from the COVID-19 virus. Brown got the idea for orchestrating a collective helping hand after he returned to L.A. from Georgia on a nearly-empty flight following the shutdown of Red Notice.  “When you have no job, it’s good to have a job,” he says. “Setting up a supply chain, orchestrating the fabric, the trim, the money—it’s a lot, but in a way, what we’re doing now is very much what we do as costumers: we solve problems.”

Brown took a break from toiling on his beloved 1997 Bernina sewing machine to explain how he and his colleagues set up a sheltering-in-place production pipeline that has so far provided 16,000 masks for those in need of high-quality protection.

“The first plea for personal protective equipment came from a hospital in Seattle,” Brown recalls. “They had trouble replacing their PPE, so costumers started talking about this on social media and texting me. The collective consciousness was all about ‘We’re not working right now, so how can we help?’ But everybody was kind of doing their own thing and I was like, ‘Okay somebody’s got to organize this.’ So I posted this call to arms on Facebook: ‘Hey if you want to make face masks, let me know and I’ll put you on the list.”

Next, Brown went to work amassing the raw materials. “In the costuming world, jobs are very compartmentalized,” Brown explains. “I reached out to Amelia McKinney (costumer on, most recently, Ford V. Ferrari), whose job it is to source and purchase fabrics, notions, and bindings. She called around and got Kagan Trim Center to donate elastic.” Brown himself visited Ragfinders of America in downtown L.A. “The guy who runs it, Ruben, buys fabric leftovers from all over the place. I asked if he could donate material for the project.” The veteran “rag finder” responded with 600 yards of fabric. “We blew through that in a week so I went back to the well, called Ruben, and got another 1400 yards.” Brown then called on La Cienega Studio Cleaners, which normally services shows filmed in and around L.A. “It was a huge job,” Brown says, “But they agreed to clean and press everything for free.”

“The challenge when we started is that 705 [Motion Pictures Costumers] had one pattern and 892 [Costume Designers Guild] had a different pattern,” Brown says. “That created confusion.” To get all the crafters on the same design page, David Matwijkow [Thor: Ragnarok] came up with a new pattern better suited to all skill levels. Then came Marilyn Madsen, a costume manufacturing foreperson, and Dorothy Bulac Eriksen, a key specialty costumer, who had just finished Star Trek: Picard. “They perfected the pattern and we wrote out step by step instructions,” Brown says. “Then costumer Augusta Avallone [Chuck] made a tutorial video. We released everything on the same day, which almost killed me. But it was amazing.”

Brown and his team assembled individual mask kits, which included one yard of woven cotton, a yard of the poly-woven jersey, elastic bands, and the pattern. To maintain a safe social distance, the kits were distributed at a drive-through station at the Costume Designers Guild’s Burbank headquarters. “We’d ask how many kits and just drop them in the car,” Brown says. “Then when the volunteers were done making the masks, they could just drop them off in these little bins at the Guild.”

While the initial batch of masks achieved the top-rated “N95” level of filtering efficiency, Brown learned from his sister about an even more effective material.  “She sent me this article by an anesthesiologist who wrote about how this fabric that wraps sterilized surgical instruments could be used to make face masks,” Brown recalls. “This material called Halyard has a 97 to 99 percent efficiency rate. I contacted IATSE [International Alliance of Theatrical Stage Employees] and they reached out to UCLA Health, who manages our health care. Over the next two weeks, I made a lot of prototypes and they settled on a one-size-fits-all design. So now we’re producing masks for UCLA that go to 185 different clinics and hospitals all over Los Angeles.

The costumers’ ongoing mask initiative has now expanded to include members of the Art Directors Guild, the Theatrical Wardrobe Union, and Local 44, which represents prop masters and other below the line crew members. “We’ve become this huge community of people working together toward the same goal,” Brown says. “But I’m not going to lie: it’s been exhausting. The great thing is that ten years from now when I look back on this [pandemic], it’s the thank you card from a Louisiana hospital or the beautiful letter from a nurse in New York who got one of our masks—that’s what I’ll remember, not the hardships.”

Featured image: CULVER CITY, CALIFORNIA – MARCH 31: An employee from the Tieks by Gavrieli shoe company makes masks to be donated to hospitals amid the coronavirus pandemic on March 31, 2020 in Culver City, California. The Los Angeles-based shoemaker, after learning of a need for masks in hospitals during the battle against COVID-19, has retrained employees to make the masks from sewing machines and launched an online campaign teaching people how to make the masks for donation at home. The cotton masks are intended for use by medical workers in non-coronavirus situations with more than 30,000 masks from the online campaign #SewTogether already on the way to hospitals, according to the company. (Photo by Mario Tama/Getty Images)