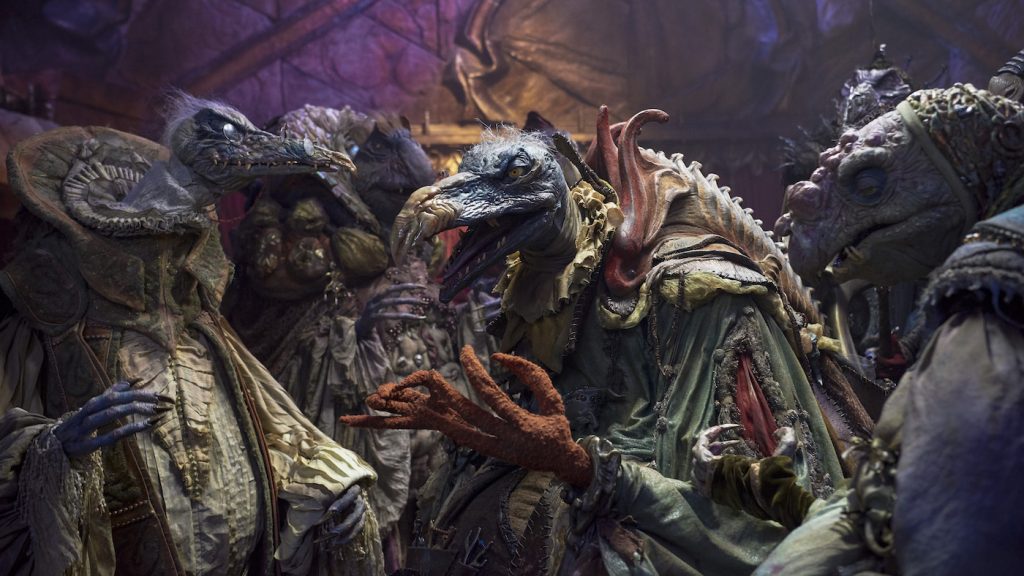 San Diego Comic-Con, now in its 50th year, draws an estimated 135,000 fans of comic books, movies, and pop culture. This year, the major studios dropped a slew of highly-anticipated movie trailers (like Top Gun: Maverick), TV productions teased scenes from new shows (like Netflix’s The Witcher), and fans geeked out over behind-the-scenes tidbits about popular and upcoming projects. Yes, there was a lot more happening at this year’s con than just Marvel’s return to Hall H.

The exciting projects are almost endless at San Diego Comic-Con—from Kevin Smith teasing three Batman actor cameos in his Jay and Silent Bob Reboot to Patrick Stewart introducing 2020’s Star Trek: Picard, the final season of Supernatural celebrated to DC Universe dropping an R-rated animated trailer for Harley Quinn—but here The Credits is rounding up some of the projects that got the most buzz at the country’s largest comic convention this year.

Most talk about the new Terminator movie swirled around the return of Linda Hamilton as Sarah Connor and how much violence fans can expect in the movie.

Director Tim Miller—who noted it’s his 25th comic con—promised the crowd that the film, which will be released Nov. 1, will be rated R. A behind-the-scenes featurette aired during the movie’s panel at San Diego Comic-Con teased plenty of R-rated content.

The Hall H panel included stars Arnold Schwarzenegger and Hamilton. Schwarzenegger said he returned to the franchise because “I’m addicted to Terminator.”

Hamilton, who said she trained for “a good year” to get into condition for the role, added that she embraced a return as the iconic Sarah Connor character in part because of the passage of time.

“I felt that there was just a world of richness that I could explore and then rock it as a woman of a certain age,” she said on stage. “The richness of my life experience is only going to enrich the character that I play.”

As a bonus, producer James Cameron’s live-streamed appearance on the panel teased “classified” clues about his upcoming Avatar sequels, which are currently in production.

“I’ve got to stay here and work because everybody’s always whinging about how long it’s taken to get Avatar done,” he joked.

Tom Cruise made a surprise appearance at Comic-Con after the Terminator panel in Hall H to introduce the trailer from Top Gun: Maverick. Both movies are produced by Paramount Pictures.

“34 years ago I made a movie right here in San Diego. I actually shot across the street in a restaurant,” he told the crowd. A barbeque restaurant near the convention center still advertises that the “sleazy bar scene” in 1986’s Top Gun was shot there.

“For 34 years, you guys have been very, very patient with me,” Cruise added, before revealing the new trailer.

“Everything you see in this film, it’s for real. We worked with the Navy,” Cruise told the Con crowd. He called the movie “a love letter to aviation.”

The trailer confirmed that Cruise’s character Maverick is flying the Navy’s new “Super Hornet” jet in the movie—an update on the F-14 he flew in the original film—although Cruise, known for doing his own stunts, has said he was not allowed to fly the advanced aircraft himself.

The BBC/HBO co-production based on Philip Pullman’s His Dark Materials series dropped its first full trailer during a panel in Hall H.

Lin-Manuel Miranda, who plays Lee Scoresby on the show, made his Comic-Con debut on the panel. He noted that he and his wife read Pullman’s books together while they were dating and that he said “yes” to the series without knowing which character he would play.

Many of the actors emphasized the importance of their characters’ on-screen relationships to their daemons, which are manifestations of each character’s inner self as an animal. Wilson noted that the use of puppets as stand-ins for the animals during production helped the actors, “the camera crew, and the editors to know where these daemons were going to be on the screen.”

While Netflix’s The Witcher earned a lot of coverage at Comic-Con, Netflix also brought an “immersive experience” and a behind-the-scenes teaser for The Dark Crystal: Age of Resistance to the convention. The upcoming series is the prequel to the beloved movie 1982 The Dark Crystal.

The cast of the new series, premiering August 30, includes veteran voiceover actor (and frequent Comic-Con guest) Mark Hamill as The Scientist. Hamill was presented with the 2019 Comic-Con Icon Award during a Hall H panel for the show.

“Guys, if it weren’t for you, I certainly wouldn’t be standing here,” he told the crowd.

The showrunners on Dark Crystal say they hoped the puppetry on the show is so good “you watch the show and you forget you’re watching puppets.”

“The idea is you watch the show and you forget you’re watching puppets.” – Louis Leterrier (Director/EP) pic.twitter.com/vSpGy276fl

Lisa Henson, who is the daughter of Jim Henson and an executive producer on the series, said she’s thrilled the show is finally happening.

“To be in Hall H saying [this series is] real is like the greatest moment of my professional life,” she said on the panel. “It was a very special project very, very close to [my father’s] heart and he found it to be the biggest challenge and his most personal film.”

Universal Pictures teased an upcoming The Walking Dead movie during a Hall H panel for the AMC show. The teaser trailer reveals that Andrew Lincoln will return as Rick Grimes in the untitled film, which has no release date yet.

The AMC show, now in its tenth season and based the comic book series written by Robert Kirkman, returns on October 6. Danai Gurira confirmed during the Friday panel at comic con that this season will be her last as the character Michonne.

The show’s panel left the stage before the film teaser aired, allowing AMC and Universal to keep any other details about the upcoming movie locked down. One of the only known facts is that Walking Dead executive producer Scott Gimple will write it.

Hulu dropped its new eight-episode season of fan-favorite Veronica Mars a week early, on the day the first episode premiered at the Con, rather than on July 26 as previously announced.

Kristen Bell, who appeared on packed panels Friday for Veronica Mars and Saturday for NBC’s The Good Place, joked that she asked Hulu to stream the shows early for her birthday present. Bell’s birthday was this past Thursday.

Revealing that the new season of the formerly-teenage detective show is more adult than The CW’s version, Bell also noted that her kids aren’t allowed to watch the new season until they’re 15.

Bell promised she’ll “play Veronica until everyone in [fictional town] Neptune is dead.” Creator Rob Thomas has joked that the show could run until it’s the next “Murder, She Wrote.”

HBO’s new series Watchmen didn’t host a panel at Comic-Con, but they peppered the area with advertisements featuring the infamous bloody smiley face, set up an “immersive experience” near the convention center, and teased the trailer before it dropped on Saturday.

The upcoming series has Comic-Con DNA. It’s based on the beloved graphic novel by Alan Moore and Dave Gibbons and adapted by Damon Lindelof, a convention veteran. The new trailer confirms the show will be a sequel to the original graphic novel, rather than a strict adaption.

The show will air in October.

Game of Thrones may be over, but its fans have not forgotten. A large number of the cast showed up to do a postmortem in a “final” Comic-Con panel celebrating the show’s record-setting 32 Emmy nominations and defending the final season of the show, which concluded May 19.

Conleth Hill, who played Varys, joked that he started the petition to remake season 8 —and doesn’t regret it. But he, like his fellow cast members, insisted most fans love the show.

“It’s going to piss you off no matter what because it’s the end,” said Nikolaj Coster-Waldau, who played Jaime Lannister. He went on to beseech people displeased with the ending to “just don’t call people names.”

Liam Cunningham, who played Davos, argued that he’s “optimistic” about the fate of the Seven Kingdoms.

Speaking to a mostly enthusiastic audience with only a few negative shouts during the panel, Hill told the crowd: “We’re very grateful for your fandom over the years and I think this is the reality rather than a media-led hate campaign.”

TBS dropped the first trailer for the new series based on the 2013 sci-fi movie during a panel near the convention center. Showrunner Graeme Manson nodded to the French graphic novel, by Jacques Lob and Jean-Marc Rochette, as a source of “great ideas” for the new series, although the trailer visual

TBS also brought memorable “cricket bars” as swag to comic con. These cricket-based protein bars are reminiscent of the daily insect-based rations seen in the movie.

The new series, about the survivors of a frozen apocalypse living—and fighting—on a speeding train, is set to premiere in spring 2020.

Get your very own #Snowpiercer Bug Bar at @Comic_Con.? pic.twitter.com/Dqw7zJU1R8