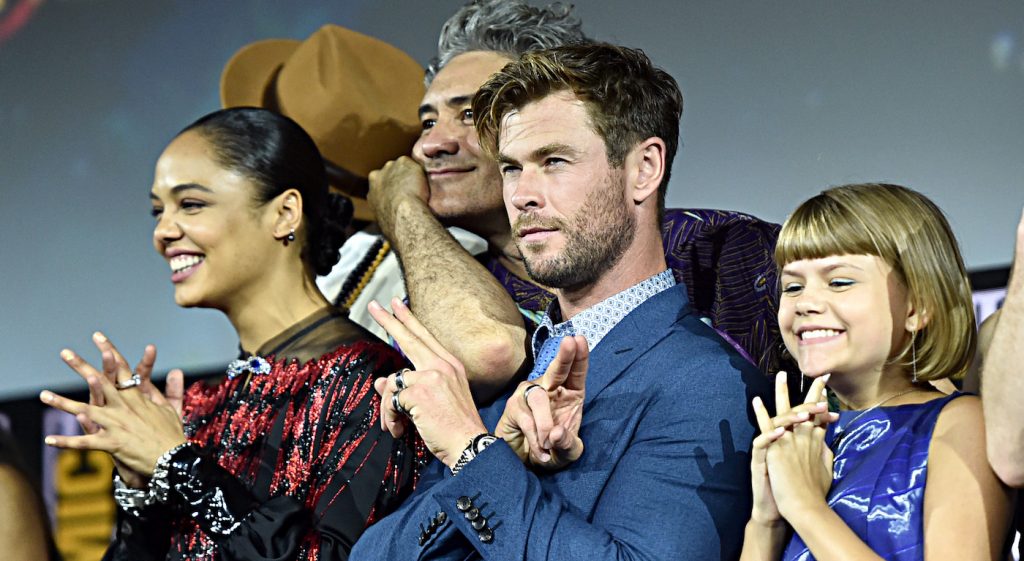 Marvel Studios executive producer Victoria Alonso was so excited about revealing “Phase 4” of the Marvel cinematic universe that she sang rather than share spoilers ahead of the highly-anticipated panel in San Diego Comic Con’s largest forum, Hall H.

“So much that I can’t say,” she told a smaller audience earlier in the day during a “Women of Marvel” panel. She broke into the choruses of “Hooked on a Feeling” followed by “I’m So Excited.”

Alonso did not overhype the revelations of Marvel’s primetime panel.

Marvel Studios’ President Kevin Feige on Saturday night announced the next steps for several beloved characters, including the next Doctor Strange movie, Doctor Strange: in the Multiverse of Madness, scheduled to hit theaters on May 7, 2021; the next Thor, Thor: Love and Thunder, set for November 5, 2021; and Black Widow, set for May 1, 2020. Black Panther 2, Captain Marvel 2, Guardians of the Galaxy 3, and a new X-Men and Fantastic Four are also in development without confirmed release dates.

Doctor Strange: in the Multiverse of Madness is expected to be “the first scary MCU film,” according to director Scott Derrickson. Benedict Cumberbatch will be back as Doctor Strange, and he will be joined on screen by Elizabeth Olsen as Scarlet Witch. Cumberbatch said while the film has some “horror” elements it will also retain the humor of the first movie.

Just announced in Hall H at #SDCC, Marvel Studios’ DOCTOR STRANGE IN THE MULTIVERSE OF MADNESS with Benedict Cumberbatch and Elizabeth Olsen. Scott Derrickson returns as director. In theaters May 7, 2021. pic.twitter.com/bVyOYjPLly

Natalie Portman is returning to her role as Jane Foster in Thor: Love and Thunder, the fourth Thor movie. Marvel announced she will take up Thor’s hammer to become the goddess of Thunder, a popular comic book storyline. Chris Hemsworth and Tessa Thompson will also return as Thor and Valkyrie.

“Feels pretty good. I’ve always had a little hammer in me,” Portman said, holding Mjölnir on stage at comic con.

In Black Widow, Scarlett Johansson will get the chance to showcase Natasha Romanoff’s backstory. The prequel to the Avengers movies also stars David Harbour, Florence Pugh, O-T Fagbenle and Rachel Weisz. Marvel played some fight scene footage from the new movie during the panel.

“I get to play Natasha as a fully realized woman, in all of her many facets,” Johansson said at the panel. “I’m excited for fans to see what she perceives to be the flawed side of her, and I’m looking to wipe out some of that red in my ledger.”

Elizabeth Olsen, as Scarlet Witch, and Paul Bettany, as Vision, star in WandaVision, which Olsen said gets “weird,” especially for a Marvel series. They will be joined by Teyonah Parris, who plays Monica Rambeau, a character introduced as a young girl in Captain Marvel. The series will tie into the next Doctor Strange movie in some yet-to-be-revealed way.

Tom Hiddleston returns as Loki, god of mischief, in Loki. This version of Loki is the one who disappeared during an earlier timeline in Endgame, which Hiddleston said means “there’s a lot of psychological evolution that is still yet to happen.”

“The question I got asked more than any other question in Endgame was where did Loki go, what happened to Loki?” Feige said. “This series will answer where he went.”

“I get to teach someone else to be a superhero without superpowers” on the show, Renner said on stage. The someone else is Kate Bishop, a female Hawkeye known from the Young Avengers comics. Marvel has not yet revealed the casting for the character.

Marvel will also debut an animated series on Disney + in summer 2021 called What if. Many familiar Marvel characters will reprise their roles as voice actors on the show.

Shang-Chi will be Marvel’s first Asian-led superhero movie, with Simu Liu cast as the lead, and Hayek also took note that her role as Ajak in The Eternals adds to the diversity of the Marvel cinematic universe.

“This movie will allow those who have never felt represented in movies, in this case, superheroes, to be represented. I love my diverse family,” Hayek said on stage.

Feige also announced Mahershala Ali will join Marvel Studios in a new version of Blade. With no release date or further details, the announcement still got a huge positive response in Hall H when Ali donned a Blade cap in the final moments of the panel.

Finally, in a case of epic timing for Marvel, Avengers: Endgame on the same day of the panel officially beat Avatar for all-time top-grossing box office movie.

“I want to be very clear. We want to beat Avatar,” Alonso said earlier in the day.

Somewhere, she is singing.