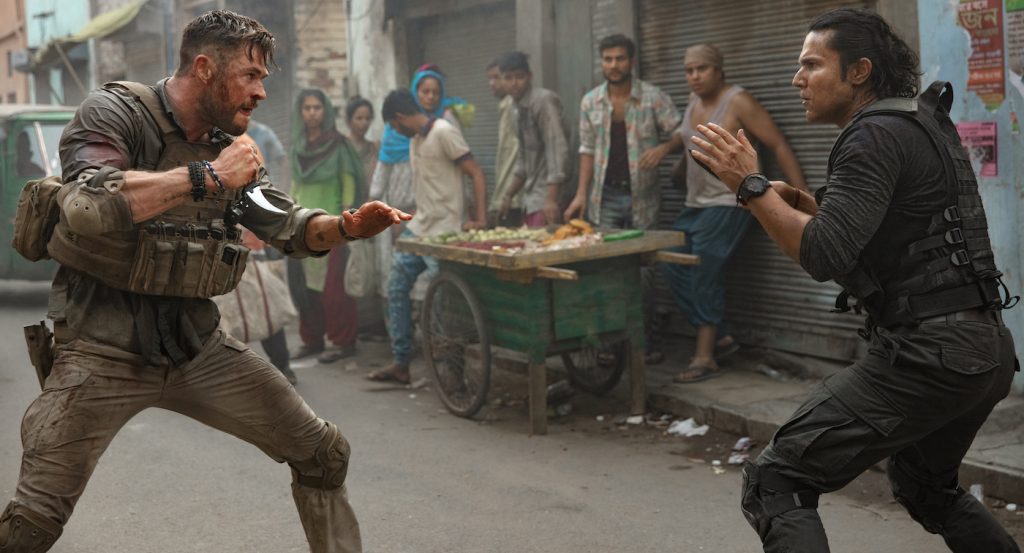 Chris Hemsworth knows his way around an action scene, but his work as Tyler Rake in the first Extraction was about as intense as it gets. Now, Hemsworth has teased a scene from Extraction 2, which will pick up sometime after the end of the first film, you know, after Rake was shot, fell off a bridge, and presumably died. Tyler Rake’s survival in director Sam Hargrave’s hit film seemed likely but was far from definite when the credits rolled—then Netflix made Hemsworth’s return to the role in the sequel official at their big Tudum event this past September. During that event, a teaser showed Rake opening his eyes underwater.

Hemsworth took to Instagram to give us a peek at a scene from the sequel, with what appears to be some kind of trouble breaking out in a city square, complete with fire. “Just another day on Extraction 2,” Hemsworth tells us. Is this a riot, a brawl, or something else? Hemsworth is wearing a tactical jacket and appears to be back in Tyler Rake’s mercenary world.

Director Sam Hargrave returns, working off a script from Joe Russo. Extraction 2 promises to reveal not only how, exactly, Rake survived at the end of the first film, but what his new mission in the second in. The first film was centered on Rake’s job to try and rescue the son of an imprisoned international crime lord. The sequel began filming back in December, with Hemsworth’s old pals the Russo Brothers (producers and writers on both films) tweeting a video from day one of filming in Prague.

Extraction 2 is due sometime in 2022. We’ll be sure to share more whenever Hemsworth, the Russo Brothers, or Netflix does.