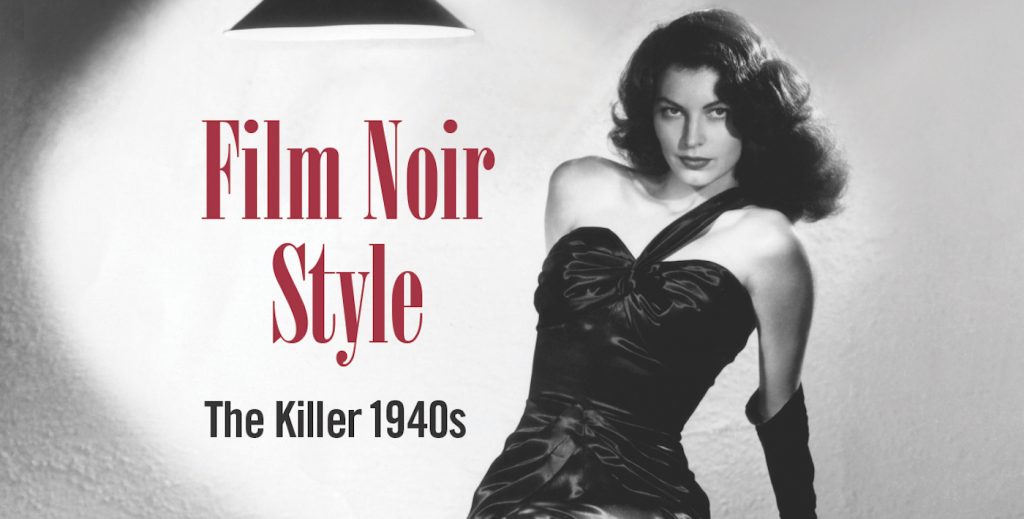 “Film Noir Style: The Killer 1940s” is a new book from film and fashion historian Kimberly Truhler about the influential, iconic, and unforgettably gorgeous costumes that helped define a genre and an era. The book, which is packed with images from the films, explores the way the costumes defined the characters and the way costume design and fashion design influenced each other. “Hollywood costume designers developed American style and replaced European couture as the greatest influence on fashion, especially during the early 1940s,” says Truhler. “Few understand the impact that the Production Code and World War II had on style, especially with regards to rationing, and how Hollywood costume designers worked with and around the restrictions.”

In part one of our interview, Truhler explained how designing for movies is different from designing for retail, why the most dangerous women in film noir movies dressed conservatively, and some of the reasons those movies made 80 years ago are still such a vital part of our culture.

How are fashion and costume design different?

This is a great question and it’s an important distinction. Costume design is about communicating character on screen. Costume designers must work with many other artists – such as directors, production designers, hairstylists, and makeup artists, and the actors themselves – in order to craft designs that reveal character while also contributing to the overall vision of the film. Costume design must have the ability to simultaneously stand out to the audience while also being one with the production. That is very different from fashion design. All that said, the reason I often refer to my work as the history of fashion in film is that there are many points in which costume design and fashion design intersect.

They intersect but remain separate.

Yes, costume design and fashion design should not be conflated. Within the study of film, costume designers continue to be given less respect than other artists like directors, screenwriters, cinematographers, and so on, because far too many people think of their work as “just clothes.” Rather, their work is vital to these productions. Costume design is what drew people to the theaters when these films first premiered, and costume design continues to be one of the biggest reasons we revisit them today.

One of the hallmarks of the noir film is the femme fatale, the tough, hard woman who draws the hero into trouble. What did costume designers do signal to the audience what these women were like?  How about the “good girls?”

One of the things I discuss in my book is the distinction between femmes fatales and “intrigantes” – women who intrigue. Not all women in film noir are bad. There is a spectrum. Some of the women are good, some don’t necessarily mean to be bad, and others are out and out murderers. But all of the leading ladies are remarkably strong.

In the early days of film, you could often tell the “bad girls” by their costumes. Think of the early vamps, for example. Not so in film noir. The femmes fatales and intrigantes most often dressed like ladies. There are a couple of reasons for this. One, the “bad girl” characters used this ladylike veneer to hide their intentions while committing their crimes. I often refer to the costume designers as their co-conspirators. Another reason is the Production Code. Because these women were often behaving so badly, including being involved with murder, costume design was used as a way to off-set how bad these characters were. When they were dressed like ladies in proper suits and dresses, it was easier for filmmakers to squeak things by censors behind the Production Code. Of course, femmes fatales and intrigantes usually stood out as more glamorous than other characters, particularly with their sensual evening gowns. But these costumes were part of an overall wardrobe that leaned toward respectability.

Why do the noir films of the 40s still mean so much to us today?

There are a few reasons. One is that their rather minimalist aesthetic is very modern. Think of something like Joan Crawford’s pinstripe suit in Mildred Pierce (1945), for example, a design that continues to influence women’s career wear today. Another is that costume designers still managed to weave some serious glamour into an era with constraints like war rationing. It’s incredible that some of the costume design from film noir remains the most influential of all time on fashion. 1946 is a particularly fruitful year in that regard with Gilda, The Killers, The Postman Always Rings Twice, and The Big Sleep. There’s also just the mood of film noir that we continue to respond to, the mystery and daring within it, which is also communicated through costume. And it’s an era where men and women were on more equal footing, something I explore throughout the book, and we see this reflected in film noir. Women were strong and independent during the 1940s, both on and off the screen. That also seems remarkably modern.

For more on costume designers, check out these interviews: