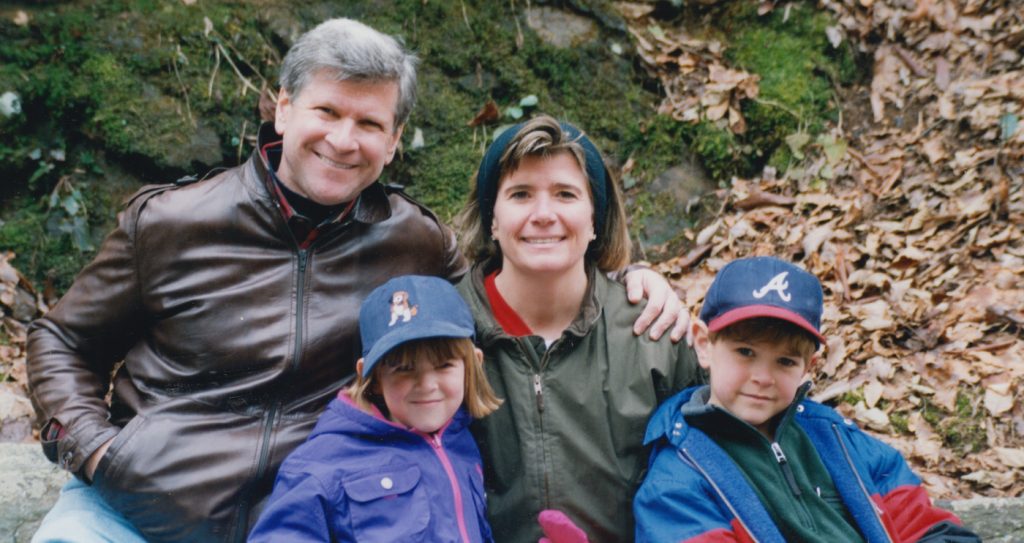 As the title suggests, Murder on Middle Beach, the four-part HBO documentary, revolves around a tragedy. On March 3, 2010, Barbara Hamburg was found stabbed to death outside her home in Madison, Connecticut, an unassuming beachfront town. An unlikely victim, police were unable to find a suspect. But what makes this unsolved murder story even more compelling is that it is being told by Madison Hamburg, Barbara’s son.

Madison was 18 years old at the time and a film student in college. Ultimately, he decided to make a documentary about his mother. He spent years interviewing his father, sister, aunt, other relatives, and law enforcement searching for answers about who his mother was and why she was killed. What he ultimately discovers is how little he knows about his family.

Framing this unsettling sojourn is a haunting title sequence that sets the tone for what’s to come. As James Lavino’s eerie theme plays, the camera pivots upward past a series of miniatures buried deep within the earth. In total, five unique dioramas detail the story arc. Intermixed are jarring flash cuts of family photos and home movies. The shot finishes on a model recreation of the house where the murder took place.

“I have a habit of skipping title sequences and wanted to create something that was more a storytelling element than a backdrop for credits,” says Hamburg. “There was intention behind every minute detail of this sequence, down to the color, shot design, and even the clothes that the subjects are wearing.”

The model for the opening was created by Thomas Doyle, an artist known for his striking miniatures. His work has appeared in galleries around the world and graced the pages of The New York Times, The New Yorker, and Time. Hamburg originally reached out to Doyle to explore the idea of using miniatures to recreate scenes that couldn’t be captured on film.

“He got in touch with me because he liked my work and wanted advice about what’s possible — get the lay of the land,” remembers Doyle. “It certainly sounded like a great project. So by the end of the call, we were talking about going forward and working together.”

Concluding that recreations weren’t feasible, Hamburg conceived the idea of building a title sequence around miniatures.

“We wanted to parallel this overarching theme of duality between the outward ‘American idyllic’ setting and the darkness that lay beneath, prevalent throughout all of the major story arcs,” continues Hamburg. “Miniaturizing helped to push that idea, especially when it is done with such detail that it blurs the lines of reality. ‘Is what I’m looking at real or fake?’”

For inspiration, Hamburg turned to one of Doyle’s works — Distillation. A series of miniatures depicting families and homes in various stages of disarray, it evoked the feeling the filmmaker wanted.

“Madison and his producer Solomon (Petchenik) put together a teaser reel with my work and the flash flutter cuts as a way to sell the idea. ‘It could look like this,’” says Doyle. “They brought that to me and I just fell in love with it.”

In an effort to draw viewers in, episode one opens without the title sequence. “Then, when people see episode two, they start to make the connection of things they’ve seen — like there’s a tiny birthday cake in the model that represents the first episode,” explains Doyle.

The initial plan was to only display objects. But it became apparent that the sequence would be more impactful with human figures. Model railroad shops, toy stores, and architecture kits are Doyle’s typical go-to places for figures. But since the ones here needed to evoke the documentary’s subjects, there was extensive cutting, sculpting, and painting to arrive at the Murder on Middle Beach miniatures.

All the objects were created from scratch. Doyle felt that they were so prominent in the story that they needed to be precise. “The team provided me with tons of background material, photos, the home movie imagery,” he says. “I spent a lot of time looking at that to recreate the look of her wedding dress, her computer, that mailbox. I focused on the details to that level.”

Materials came from anywhere and everywhere. Any household item is fair game in Doyle’s mind. A lobster pot in the first scene is the top of a Chapstick tube painted silver. “There’s a lot of picking through the trash as well,” he jokes. “Don’t throw that away, it could be used for something.”

By Doyle’s estimate, the model stands over six feet tall. The dirt underground spans between four and five feet. He built it this past spring in his Westchester, New York studio. Separated by the pandemic, Doyle chronicled each step photographically and sent it to the production team. Together, they added and deleted pieces to shape what is finally seen.

“We wanted to lean into the feeling of nostalgia and familiarity,” adds Hamburg. “We wanted the compositions to feel inexplicably familiar, but not so much so that they would be discernible.”

“Obviously an artist in his or her studio is free to run off in whatever direction. In this case, we all had an understanding of what we wanted to create,” explains Doyle. “So it’s collaborative in that way and really wonderful to get feedback day to day as I documented — and then see this big thing come together.”

The final image — the house — was also built completely from scratch. “I wanted to recreate that exact house down to the mullions of the windows,” says Doyle. “Every piece of clapboard, all the siding was laid in because I wanted to be true to that house. I stuck to it very closely.”

Sharp viewers will notice subtle changes to the home as the series progresses. By the last episode, the windows are broken, there are holes in the roof. The trees are overgrown and the lawn is filled with rubbish.

“The idea was to see it erode over time as Madison dives a little deeper into the family history and the secrets around that house,” says Doyle. “Some of the artwork I created evokes the sense of the house being a character. As you get to the reveal, you see the emotional toll that’s being taken on the house.”

The title sequence shoot took place at MoSoMos in Brooklyn. Knowing the pitfalls of transporting fragile art pieces, Doyle was keenly aware that eventually, his model would need to make a road trip. So he planned accordingly, designing it so that it could be broken down and packed in his car.

MoSoMos’ Bil Thompson served as cinematographer. Because of the pandemic, the crew was kept to a minimum. Doyle assembled the model, added the smaller pieces and decayed the house as needed. Hamburg was on hand to confer with Thompson. “Just to kind of talk lenses and make sure we had the moves right,” says Doyle. “I was really happy to have him there on set so he could frame things like the composition of the trees.”

MoSoMos’ specialty is stop motion animation. Thompson shot the sequence using a motion control rig. “Shoot raw images and then move the camera, shoot and move, shoot and move,” continues Doyle. “You get very high quality because you’re shooting in raw digital images. It looks like a fluid shot.”

Murder on Middle Beach marks the first time Doyle’s art has been featured in a TV series. He couldn’t be more pleased that it’s on HBO. The network’s iconic 1980s opening featuring a miniature cityscape was a big influence on his work.

“Watching that sequence as a kid was what made him want to explore the world of miniatures,” says Hamburg, remembering his first telephone conversation with Doyle. “At that moment, I knew, no matter how we incorporated miniatures into this story, Thomas was going to do it.”

Murder on Middle Beach is available now on HBO and HBO Max.

All the Warner Bros. Movies That Will Hit HBO Max & Theaters on Same Day in 2021