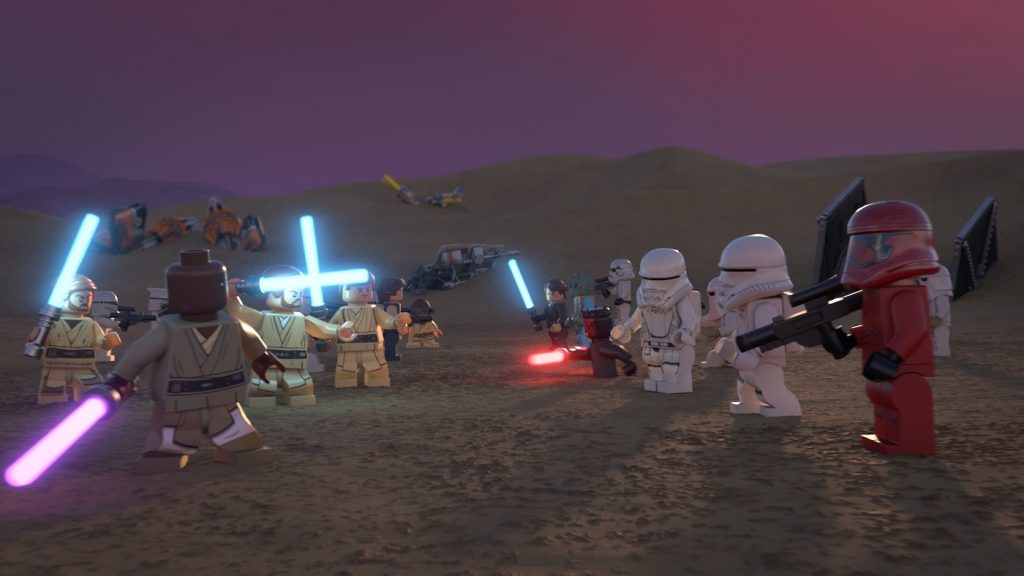 For a certain type of Star Wars fan, the 1978 Star Wars Holiday Special holds a special place in their heart. It came just a year after George Lucas’s 1977 game-changing first film, Star Wars IV – A New Hope, and was the first official Star Wars spinoff, set between the events in A New Hope and 1980’s The Empire Strikes Back. It was…not well received, and has never been re-broadcast or available on home video. This, of course, has made it something of a cult classic. Anything you can’t find has intrinsic value, and for a particular Star Wars fan, the 78′ Holiday Special is a joyous botch.

Which brings us to The LEGO Star Wars Holiday Special, which will be airing on Disney+ on November 17. Directed by Ken Cunningham and written by David Shayne, the special not only doesn’t run from the legacy of the 1978 original holiday special, it happily picks up where it left off. Rey, Finn, Poe, Chewie, Rose, and their beloved droids are reuniting to celebrate Life Day, a holiday first introduced in the 1978 original. The new special is a collaboration between Lucasfilm and LEGO, naturally.

The LEGO Star Wars Holiday Special is situated after the events of The Rise of Skywalker, which saw Rey defeating the resurrected Emperor Palpatine—with a little help from bad guy/good guy/conflicted guy Kylo Ren. Obviously, this adventure will be a lot less anxious and deadly. Here’s how Disney+ synopsizes it:

Directly following the events of “Star Wars: The Rise of Skywalker,” Rey leaves her friends to prepare for Life Day as she sets off on a new adventure with BB-8 to gain a deeper knowledge of the Force. At a mysterious Jedi Temple, she is hurled into a cross-timeline adventure through beloved moments in Star Wars cinematic history, coming into contact with Luke Skywalker, Darth Vader, Yoda, Obi-Wan and other iconic heroes and villains from all nine Skywalker saga films. But will she make it back in time for the Life Day feast and learn the true meaning of holiday spirit?

“The Mandalorian” Releases Action-Packed Teaser Ahead of Premiere

“The Batman” is Using Technology From “The Mandalorian” For Select Scenes