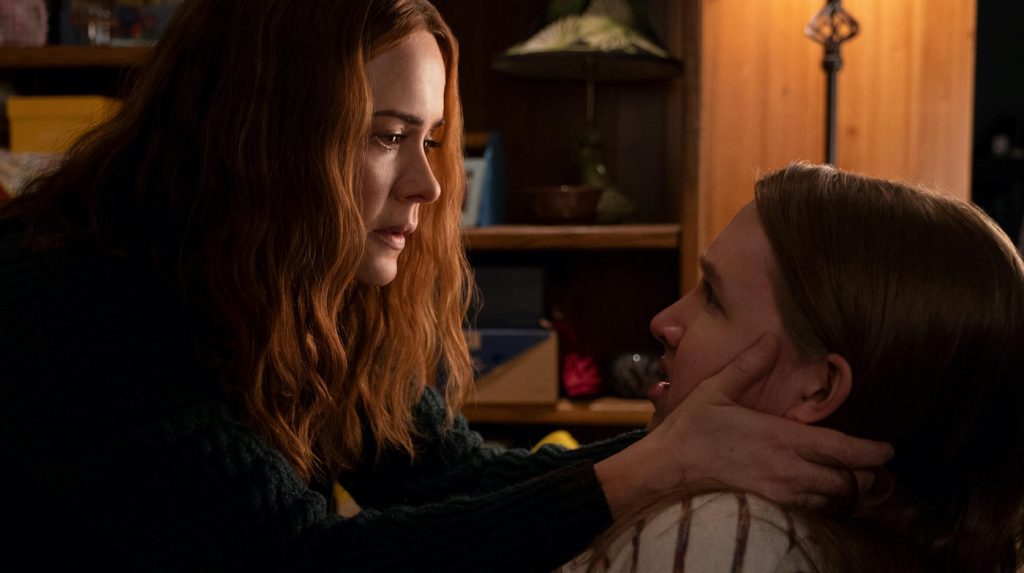 Co-writer and director Aneesh Chaganty’s Run moves like a thoroughbred thriller thanks to all its constituent parts working in perfect unison. The stellar cast, led by Sarah Paulson and newcomer Kiera Allen, Chagnaty’s lean script, co-written with Sev Ohanian, and Chagnaty and his crew’s exacting execution. The film is centered on the too-close-for-comfort relationship between a mother in daughter—Diane (Paulson) is a zealously devoted guardian of her daughter Chloe (Allen), who is paralyzed from the waist down and also deals with a variety of other ailments, including asthma and diabetes. Diana homeschools Chloe (without any technology, mind you), she manages her daily regimen of pills, and she keeps her beloved daughter more or less in her bedroom. Despite its title, Run begins with a teenager trapped by her mother’s omnipresent surveillance and care.

Soon enough Chloe begins to suspect her mother’s dosing her with mysterious medication. These suspicions begin to metastasize into the belief that Diane might be determined to never let Chloe leave and to thwart her dreams of going to the University of Washington. To test her theory, Chloe convinces Diane to take her to a movie theater in town. Once there, in a terrifically shot scene that’s as tense as anything you’ve likely seen this year (besides your own life, perhaps), Chloe’s plan becomes clear. She makes a break for a nearby pharmacy to investigate the pills her mother’s giving her, desperately trying to complete this mission before Diane finds out.

For cinematographer Hillary Spera, working with Chaganty on Run felt charged with opportunity. Chaganty and Ohanian’s first draft was fairly bare-bones, Spera told me, but the vision for the project was clear. “Aneesh had this pretty simple story about a mother and a daughter and their relationship, but then he was weaving in these darker undertones,” she says. “One of his big influences is M. Night Shyamalan, whereas I come from more a classic thriller point of view, like Hitchcock, so the merging of the two was really nice.”

Spera sent Chaganty a vision board and then flew out to Winnipeg to scout for the all-important house where so much of the action would be set. “We had to find this house,” Spera says, and once they did, they began storyboarding every second of the film. “We came up with a very distinctive visual goal. We worked hard to set up the bones for the structure of the movie visually.”

The visual structure of the movie is something you’ll feel on a first viewing rather than immediately notice. But if you were to watch the film a second time, you’ll start to see how the frame begins to shift as Chloe begins to try to agitate against Diane’s vise-like grip. “The power of lensing,” Spera says, is how she accomplishes this feat. “The subliminal way we show the daughter’s overly structured world, then with Sarah’s character, the way the lenses get lower as she becomes more imposing. The subliminal thing, it’s such a cool part of being a filmmaker. You can infuse these feelings, it’s a little puppet mastery, but it’s great. You can really mess with people.”

“The big thing in the movie is thematically is repetition and routine, Chloe’s life falls into these repeated actions,” Spera says. “She’s a disabled person, and we worked Kiera Allen, who’s disabled in real life, but the idea is that Chloe’s not hindered at all. It’s the same with Keira, she doesn’t think of herself that way, so visually we wanted to keep these repeated shots and setups that we go back to often, to show the structure of her life, so when things start to go awry you can feel it. We had these references like Rosemary’s Baby, frames within frames, this feeling of claustrophobia, so when she falls out of this structured world everything gets bigger, and that’s scary, but she thrives.”

Spera found working with Chaganty on Run to be a wholly collaborative experience. Although he had a clear vision of what he wanted Run to be, he was open to new ideas, new directions, new ways of achieving Run‘s increasingly tense sense of acceleration towards the unknown. From color themes (Chloe’s color is purple, Diane’s is green) to the subtlest tweaks of lighting and costume, the devil really is in the details. “The camera movements are very intentional, with the camera becoming a little more active as Chloe becomes more active,” Spera says. In one bravura sequence on the roof, which Spera likened to their version of a Mission: Impossible moment, the camera moves with Chloe in a way less burdened than before. These things are subtle, but potent, which is literally by design.

As for the performers, Paulson is, predictably, terrific, but Spera was bowled over by Kiera Allen. “Casting Kiera is a huge deal,” she says, adding that Chaganty, co-writer and producer Ohanian, and producer Natalie Qasabian were all determined to cast someone differently-abled. “It was about representation and visibility. That person in that experience has that relationship in a different way than an actress who is just sitting in a wheelchair. On top of that, Kiera’s an amazing actress, she really brought it, it was so inspiring.”

Spera says that one film that was in the back of her mind was David Fincher’s Panic Room, his 2002 thriller in which Jodie Foster plays a divorced mom forced to take refuge in the family’s panic room with her daughter during a break-in. “The way that Panic Room allows that space to live and be its own character was really great,” Spera says. For Run, the details of any given shot are often clues, and Spera was tasked with making sure both the macro shots (say, of a bedroom) and the micro shots (say, of a pill) resonated.

“Those details were where Aneesh would do a lot of his storytelling,” Spera says. “The food on the plate, the way it’s being cooked, the details on the pill bottle labels. We skipped most of the medium shots. The minute detail of the world was the way clues were revealed.”

Using mostly anamorphic lenses, Spera loved the way the images in these spaces ultimately looked. “It just feels almost like a 3D quality, it’s a little bit rounder, you feel the focus breathing,” she says. “When you change the plane of focus you feel that rack happening almost in an aggressive way. But I love it, it feels organic and alive, it harkens back to older films. A lot of this film is in that 2:3:9 aspect ratio, which is about Chloe’s height.”

Run is a film that gallops towards its conclusion with such confidence and skill you’ll be excused for missing all the little details Spera, Chaganty, and their fellow crewmembers buried in the frames. Watch again, however, and they’ll emerge. This kind of filmmaking was evident in Chaganty’s favorite writer/director’s masterpiece.

“Even in the way Aneesh’s idea of going back and the clues are all there, like in Sixth Sense when you watch again you see all of it,” Spera says. “I liked that’s where his head was at. I really had a blast making this movie.”

Run premieres on Hulu on November 20.

Documentarian Nathan Grossman Captures a Teenage Icon in “I Am Greta”