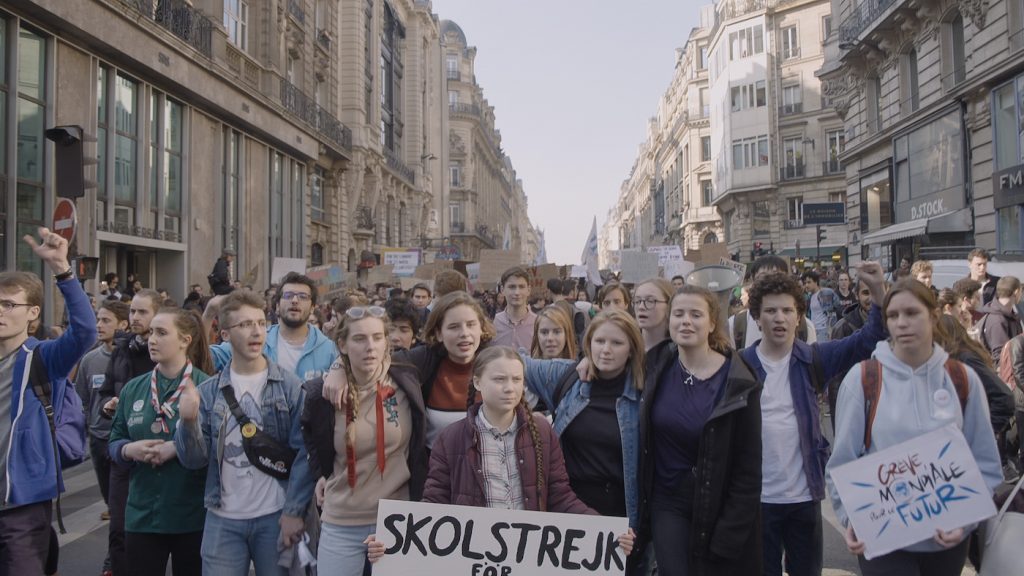 Documentarian Nathan Grossman Captures a Teenage Icon in “I Am Greta”

Swedish documentarian Nathan Grossman made a leap of faith in 2018 when he decided to film an unknown 15-year-old with a sign staging a one-person strike outside the Stockholm Parliament in order to bring attention to the global climate crisis.

Over the course of 18 months of filming, Greta Thunberg became an international figure and an icon to an increasingly energized youth movement around the world demanding immediate action to address climate change. Grossman, who lives in Stockholm, was there to capture it all nearly single-handedly. His intimate portrait of Thunberg, now known far and wide simply by her first name, is chronicled in his documentary I Am Greta, now available on Hulu.

“We went on an emotional journey over this crazy year; it’s hard to remember how quickly she goes from no one knowing her to becoming famous in a few months,” says Grossman. He didn’t know where any of this would lead when he got a tip from a friend who knew of Thunberg and her family and thought Grossman might be interested. “I knew that she was going to do the strike but when I went [to the Parliament building], I didn’t even know what she looked like. From that point, I spent lots of time filming her activism strikes. As she progressed to traveling more and getting famous, I asked if I could join her on some of her trips and I got to know more about her and her family,” he says.

Those trips were no small thing. Thunberg “practices what she preaches,” says Grossman, so she traveled to conferences and government meetings only by electric car or rail, usually accompanied by her father while her equally supportive mother stayed home with Thunberg’s sister and the family dogs. The film follows Thunberg as she addresses the Swedish government on climate change, attends a UN conference in Poland, and culminates with her appearance at the UN Climate Action Summit in September 2019. Thunberg shunned fuel-guzzling air travel and instead arrived in New York harbor to cheering crowds after a grueling three-week voyage across the Atlantic Ocean with her father and Grossman who filmed the entire journey alongside her on the 60-foot sailing boat.

“I was thinking of hiring someone but after speaking to the captain, he said it was not dangerous but it would be bumpy; everything would shake. I wanted to bring the viewer onto this journey and felt I needed to be there to do that,” says Grossman. “I wanted the audience to fully understand Greta’s way of seeing the world. A film can bring people inside the head of someone. I wanted to give the audience the chance to see the world from her point of view and perspective; let her take us through the story instead of having talking head experts tell us about her.”

Traveling with Thunberg—a trip from Stockholm to Paris by train can take some 36 hours, Grossman points out—allowed the filmmaker to gain his subject’s trust which provides the film’s many moments of intimacy and humor. We see Thunberg as an ordinary teenager as well as her growing discomfort with her sudden celebrity. A shy, self-described “nerd” who’s been candid that she has Asperger’s syndrome, Thunberg becomes frustrated as her unwanted fame starts to eclipse her well-researched, sharp message that swift action on climate change must happen right now. The film reveals Thunberg’s insistence on speaking out even as her high profile draws criticism, even death threats, from the right-wing. This tough but vulnerable teen starts to feel the increasing burden of responsibility.

“Greta is on point; she is scientifically focused so she is the complete opposite of many politicians who are long-winded and obsessed with talking, so it’s an interesting conflict,” Grossman says. “I’m happy we got to capture her with the Pope and with [French President Emmanuel] Macron but there is some hypocrisy in politicians who just want to take a selfie with her so they can cross ‘interested in climate change’ off the list. But these [activist] kids and are smarter than that. They know what taking action means.”

Looking back on his long journey filming Thunberg, Grossman says taking a chance on an interesting story is simply what documentary filmmakers do.

“I know that both Honeyland and The Wolfpack, two amazing documentaries, also started on another note when they didn’t know what they were headed for in any way,” he says. “So much is based on serendipity and being interested in stories and people. You just never know. I have hard drives at home filled with [footage] of all the times I tried or [stories] that never went anywhere or the tip I got wasn’t interested at all or didn’t work in front of the camera. It says to all documentarians that we should stay alert and stay humble and curious about the world around us.”

TAGSDirector Hulu I Am Greta Interviews