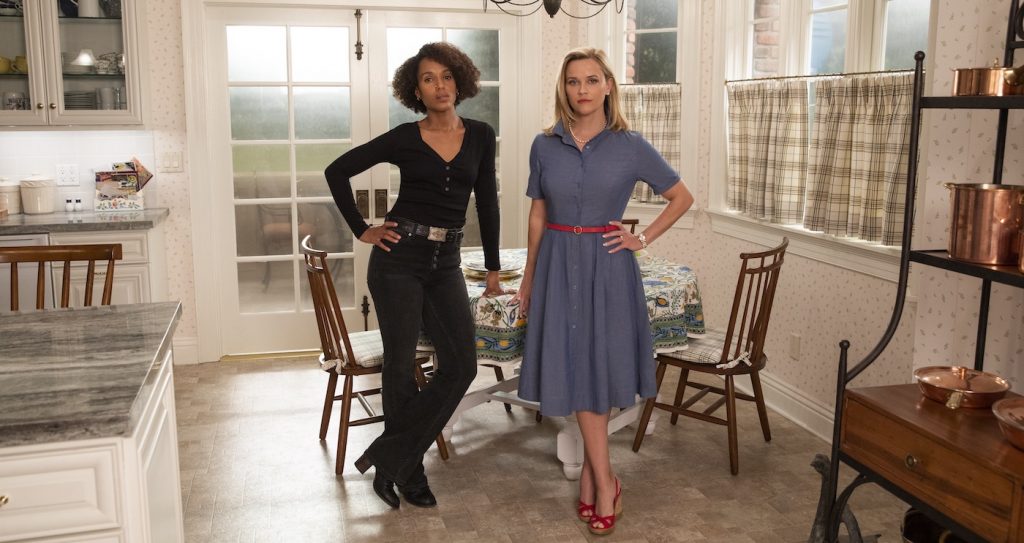 One of the many, many odd things about life mid-pandemic is how suddenly bizarre it is to watch shows and films that depict people touching, hugging, kissing, and gathering in large numbers. Even the folks who just filmed these series agree. There’s a kind of pre-coronavirus surreality to it, and if the show or movie doesn’t hold your attention, you can, at least for this viewer, find yourself more invested in how weird it is to see people cavalierly not keeping their distance than you are in the actual story.

This kind of COVID-19 related preoccupation is not an issue, however, while watching Hulu’s Little Fires Everywhere. An adaptation of Celeste Ng’s 2017 bestselling novel, Reese Witherspoon and Kerry Washington bring their considerable star power to this tale of suburban intrigue. Witherspoon plays Elena Richardson, a rich, white mother of four living in the suburban utopia of Shaker Heights, Ohio, where order and harmony are practically a canonical law. Elena has the kind of stylized, gorgeously designed, planned-to-the-minute life that works well on Instagram, all the unpleasant bits glossed over by the perfect filter. Then a mysterious new tenant moves into her rental home, Washington’s Mia Warren, and all sorts of new depths are revealed. Mia is everything that Elena is not; chill, arty, lax on stricture and structure and living a nomadic lifestyle with her teenage daughter, Pearl (Lexi Underwood). Elena and Mia are primed to tangle.

Little Fires Everywhere soon reveals the secrets, lies, and fury worming beneath the lacquered perfection of appearances in Shaker Heights. Themes of institutional racism, class warfare, the meaning of motherhood and the slippiness of identity are explored. It’s the kind of twisty, meaty drama that is all the richer for having two potent performers at its center, and precisely what you might need in our current age of frozen anxiety, as we sit and wait (if we’re lucky, that is) for this pandemic to pass, wondering what the world might look like when it does.

We spoke to one of the show’s two cinematographers, Jeffrey Waldron, about capturing the shifting moods of this blessedly absorbing drama.

Can you tell me a bit about the initial conversations you had with director Lynn Shelton and the team about adapting Ng’s novel?

My initial conversations with Lynn, our EPs, and Trevor Forrest — my cinematographer counterpart who shot Lynn’s episodes — were about finding common instincts on two basic visual dynamics. The first was that the character of Elena (Witherspoon) represented a sense of order, that her life and world were predictable, well-planned, and well-protected — and that Mia (Washington) brought a sense of chaos to Shaker Heights; she’s more unpredictable, artistic, nomadic. The other key visual touchstone was the march of the seasons, from August to December, and with it a parallel descent from even warmth to moody cool tones.

Where was filming done, and how did that change your approach?

The show is set in Shaker Heights, Ohio but we shot the show entirely in Los Angeles. This brought specific challenges to not only finding locations that fit the story, but also fit the period, and then also fit the region. The aforementioned seasonal change also brought production challenges as we needed to mimic overcast skies, rain, and eventually snow.

Can you talk about your approach to capturing the various eras depicted in the series? How doe these choices might shape the way a viewer reacts to the show?

We wanted a vintage 90’s feel for the show, but we wanted control over those parameters (softness, blooming, flare, etc.), so Trevor and Panavision created some modified full-frame lenses based on all of the vintage qualities we wanted for the show. We looked at various levels of the modifications at our test and decided to go with the heaviest version. The hope is that the familiarity of this look lands our viewers in the time period, but that we can also harness these imperfections toward finding beauty in the mundane worlds.

And what about when you go back in time?

For our flashbacks, we used a couple of different Panavision anamorphic lens makes (cropping back to 16:9) for a subtle difference in optics. I did an entire flashback episode (episode 6) on the anamorphic and we let them play wide open quite a bit — exposing all sorts of aberrations and optical flaws, lending a grittier quality to the 1980’s New York landscape. It’s fun to bring these subtle cues to the story — and it was a fun diversion from the modern lens landscape that keeps getting sharper and sharper.

Little Fires Everywhere delves into aspects of a family drama, a mystery, and a thriller—how’d you handle the shift in tones?

This is a very delicate balance and essentially requires a versatile look that can be pulled a number of different ways. After seeing Trevor’s approach with the first episode — again setting up Elena’s sense of order, the warmth of late summer, and the blunted beauty of the suburbs — I endeavored with the second and third episodes to start pushing things darker, bringing additional shape to Elena’s life as the mystery of Mia starts to unfold, and bringing even more chaotic energy and mood to Mia’s world. I did want to preserve a bit of cinema as a nod to the language and tone that served as the fabric of Celeste’s book. The prose wasn’t sloppy or gritty, but it did go dark places, and so I tried to strike a tonal equivalent with camera and lighting.

Can you give me an example of how a certain choice, in lighting, camera placement, lens, etc., helps shape the way a viewer feels while watching the show?

That’s certainly the hope; that the cinematography is coloring your experience of the events, but doesn’t draw attention to itself. I think the final sequence of the third episode is a good example of contrasting cinematic decisions that build upon each other to create an experience. You’ve got the very grounded, flat, warm feeling video camera footage of Elena marching through the house with a lit birthday cake, cut against the silhouette of a car parking in the blue shadows, backlit feet hurrying across the pavement — until Bebe invades the warmth of this birthday party and the camera flies toward her face. Elena’s suburban dream is challenged with the clash of these colors, camera movement, lighting shapes — and hopefully as you feel is the turbulence and chaos, rather than any of these individual creative decisions.

Did you have any other touchstones—be it from a film or TV series you particularly liked—you thought of while working on this show?

I was a 90’s kid, and partially a product of the suburban 90’s experience — my memories as an adolescent in that era and what it felt like were as pivotal as any film reference. Additionally, we looked at other suburban life references such as Sam Mendes’ (and Roger Deakins’) Revolutionary Road, and Lynn Shelton had a trove of great original photographs on her office wall that were a great source of inspiration for me!

What do you hope people take away from the viewing experience?

I hope people are swept up by the show’s essential mystery, as well as the fun of these amazing actresses going head to head. I’m most hopeful that the show encourages conversations about the country we live in, as there are core questions raised here about class, race, and ultimately what it means to be a mother.