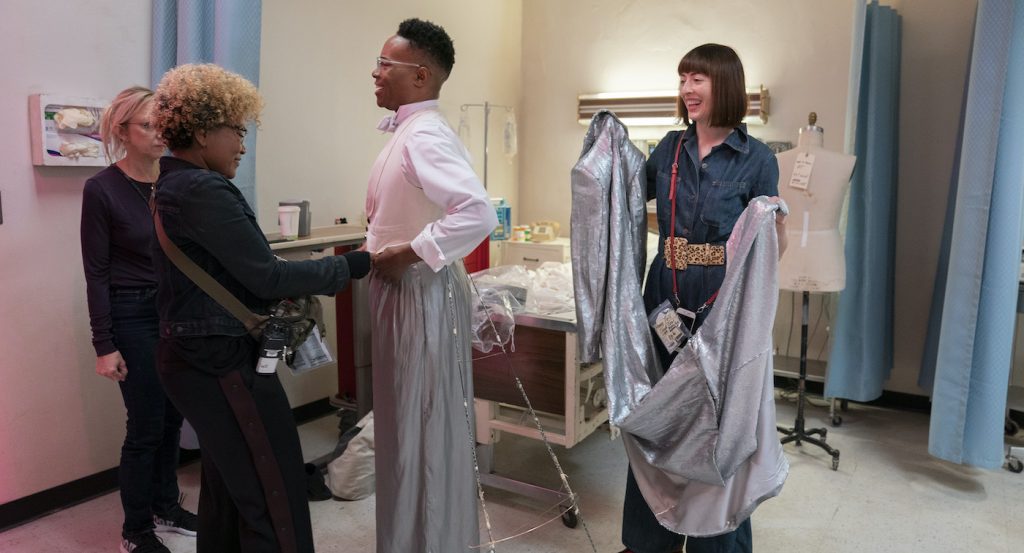 Set in the Eighties and Nineties, POSE is a dance musical that juxtaposes several versions of life and society in New York: the downtown social and literary scene, the ball culture world, and the rise of the luxury Trump-era universe. So when it comes to what everyone in the show is wearing, Costume Designer Analucia McGorty—recently Emmy-nominated for Outstanding Period Costumes—has some challenging, and extremely fun, work to do.

“I’ve always been a painter and an artist. I went to art school, I’ve been in bands, and I’ve always been really big into the music scene,” says McGorty. “A lot of the women in my family are artists, so I’ve had a great example of women and strength and pursuing your dreams. Both my parents were pretty rebellious, society-wise. My siblings and I learned from that. It shaped a lot of who we are.”

Before moving to Los Angeles 11 years ago, McGorty had all intentions of being a painter. But then she started working on photo shoots, and she was exhilarated working with other artists. She decided to shift her career to television in film, where people with all different experiences and different backgrounds could come together. “I didn’t know anybody, but thankfully I met my Sarah Bram, who’s now my very close friend, and the co-designer of Hollywood (another Ryan Murphy production). One day Sarah called and said, ‘Hey, do you wanna be a P.A. with me on this movie?’ I was like, ‘Sure, let’s do it.’ And that was it. We both hit the ground running.”

McGorty says she found being on set “intoxicating. It’s not even the celebrity part, which is kind of amazing—they are very charming and charismatic—but it’s also the energy and the fact that you get to be a working artist with these great parameters. It’s like a treasure map. A very exciting place to be. It’s great for people who are compartmentalized artists, who want to make sense, even in chaos.”

After working as a P.A. for a few years, she got into the Union as a costumer, and then became a shopper, and then she got into the Designers Guild as an assistant. She continued working on movies, and people would hire McGorty and Bram as a duo. They worked with Trish Summerville, “an amazing costume designer, friend, and humanitarian,” and then they met Lou Eyrich, best known for her work on Glee and American Horror Story: Asylum. (An icon in the field, Eyrich was awarded a Career Achievement Award in Television from the Costume Designers Guild in 2012.)

“Not only is Lou one of the greatest costume designers of all time, but she’s also a wonderful person. She really showed us the foundation of kindness within the department and really validating your crew for what they bring to the table. And that changed both of our lives completely,” McGorty says. Soon after that, Ryan Murphy brought Lou in as a producer, and McGorty started working with both of them.

On POSE, McGorty has not only found a workplace of total inspiration and collaboration, but she’s also found a place where inclusion is king. “Ryan is so much about inclusion, which is why I love working on his shows. It’s a no-brainer: Of course, we’re going to open up all the doors. Of course, everybody deserves to have their voice heard. When it comes from the top, it works. It’s a really lovely environment,” she says.

To create POSE’s groundbreaking costumes, which include such extraordinary looks as a Marie-Antoinette dress boasting a working merry-go-round and a dress that featured live birds, McGorty starts with the scripts. “I get the scripts, and I’m in a cocoon reading them. I’m in my apartment crying, laughing out loud. A couple of scripts broke me down in a way that I’ve never experienced.”

After reading the scripts, she starts researching, relying on her extensive book collection, and visiting New York’s libraries. “We ask, ‘If this is what they’re doing in the script, where were they coming from? What was influencing them? What was the trend in the city?’ Then we look at pop culture, what music they listen to, what movies they watch, what makes them angry, what fabric would make sense for the scene?” McGorty is lucky enough to have a friend who’s an archivist at Conde Nast, who’ll send her photos from specific times and eras. Boards are created, which are then shown to Ryan Murphy and his team. Once a vibe is established, McGorty collaborates with the hair, makeup, prop, lighting, and camera departments. “They are phenomenal artists,” she says. “We all really work closely together to make sure it makes sense.”

Sometimes, things can get so poignant in scenes that sentiments behind-the-scenes run just as high. “The red fringe dress that Candy wore is such an emotional look for me,” she says. “That script was so beautiful, and the night we shot that scene, it had been a really emotional week for everyone. It was like nothing I’ve ever experienced. Grips were crying. Teamsters were crying. Everyone was bawling and trying to be quiet. We all work so hard, and it’s all coming from a place of love.”