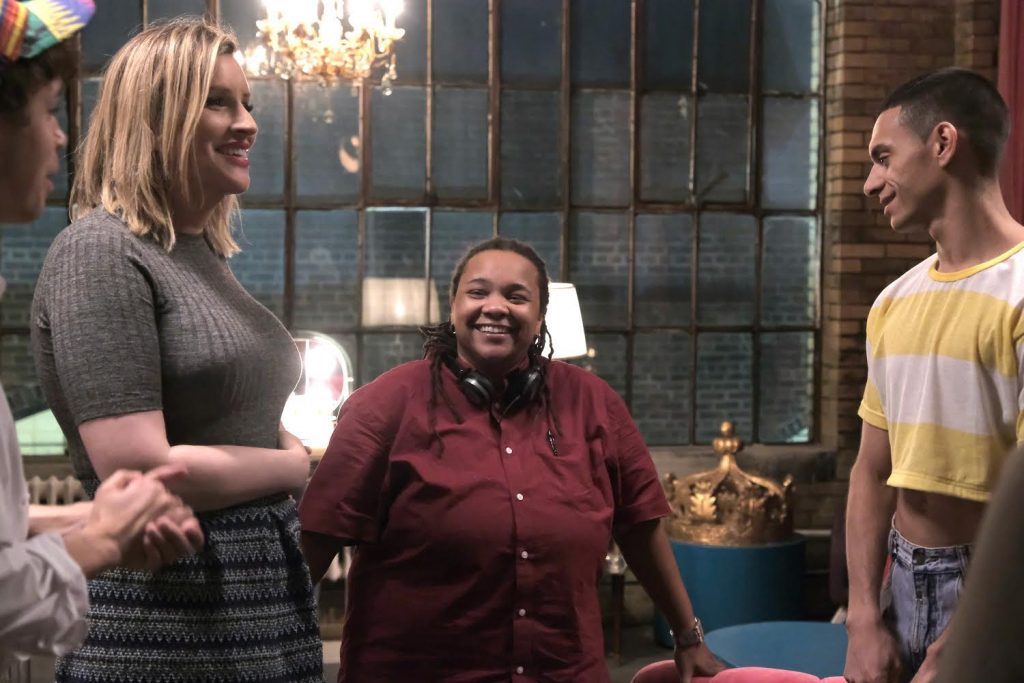 Though the month of June is Pride month, Hollywood should ideally be celebrating the LGBTQIA experience year-round, in the name of diversity.

Luckily, a new show on FX, Pose, has premiered to great acclaim, and week by week is gathering an appropriately rabid fanbase.  Creator/writers Steven Canals, Brad Falchuk and Ryan Murphy (Murphy also directs two episodes) have built a story which takes place in 1987, and examines the New York ball culture. Pose has a diverse, inclusive cast that viewers are lauding for its truthful representation, in cast, crew, and character, of everyone from the L to the A of the LGBTQIA acronym. The Credits spoke to guest director Tina Mabry, a lesbian woman of color, about her experience working on the series.

Can you talk about the experience of working on the show? It’s really groundbreaking in terms of inclusiveness.

I remember when I saw the very first teaser for Pose. It caught my interest right away! Shouldn’t be surprised, Ryan Murphy is a genius with creating suspense, expectation, and excitement. I remember being overly eager to read the script. I wanted to be so ready for this experience because of my admiration of Ryan Murphy’s body of work. Then, I remember getting the first three scripts. I’m a slow reader, but I devoured the material. Then, they hit me with the pilot and I was a crying mess, because the characters drew me in and the realness, authenticity, message, and craft overwhelmed me! After that, I just had to get to New York and create with these amazing people. The way they embraced me made me want to give all of me, all of my best, back to them in return! So yeah, the show is all of that! Groundbreaking and inclusive and so, so needed, on multiple levels!

Was the set decidedly different, given that the show is all about family and openness?

Yes! Pose wasn’t only an amazing artistic process and expression for me, it revitalized me in a way that only family can. The energy on the set was amazing. So many diverse people coming to make this show, and showing each other love and respect at every turn. When you get to create in an environment like that, you blossom. It allows you to take on the next challenge you face in future productions with a new understanding of how to approach creative conflict. Working in film and TV is stressful, and that stress effects people in different way. Each show I have worked on has taught me about art, myself, and others. I learn and grow from every project I’ve participated in. But what was so special about Pose is that the environment, created from the top down, provided a safe space to vulnerable, collaborate, and create. It was a show that came right on time, because I needed that safe space during this time in my own creative journey.

How has the landscape for women of color and members of the LGBTQIA community changed in the TV space?

It really is an exciting time to be in the industry. As a writer/director working to have access to new opportunities for over 15 years, the change in the entertainment landscape has allowed me to finally gain access on a new level. But that was after 12 years of hard work and dedication to my craft. Despite my work (Mississippi Damned, Ant, Brooklyn’s Bridget to Jordan, and Crossover) I didn’t feel seen, or like anyone cared about my voice. That can be so discouraging. But it takes people like Ryan Murphy, like Ava DuVernay, who have broken through and reach back. I am so thankful to people like them and it inspires me to reach back too.

How specifically have you seen this play out on Pose?

One of the cool things about Pose is that they have the Half Initiative mentorship program that is in conjunction with all of Ryan Murphy’s shows. It is meaningful talent development. Ryan launched the Half Initiative, with the aim of making Hollywood more inclusive by creating equal opportunities for women and minorities behind the camera. The reason this is meaningful talent development is because in addition to the mentorship the program provides, they are hiring people of color and women to be the mentors. Less than one year after launching the Half Initiative, Murphy Television’s director’s slate was 60% women directors and 90% met its women & minority requirement. In the 12 years I was trying to make my break, I did a lot of talent development programs. What is so radical about Ryan Murphy’s approach is that the people mentoring you actually know what you will have to go through in the industry as a minority.

What can fans and insiders do to support the continued progress of representation in front of and behind the camera?

As with a lot that ails our society right now, what we need is honest, open, mindful, and respectful conversation. One of the things that is so magical about being part of the Pose process is seeing how people react to the show on Twitter, and reading the stories it inspires people to share. Seeing how so many Americans are ready to be inclusive, but may not have the words to be an effective ally yet. Through discussion, through experiencing the show, we see each other as the same. That is so important. It is such a powerful thing that Steven Canals, Brad Falchuk, and Ryan Murphy have created. The impact of a television show is changing lives, allowing people to feel seen, and rippling out to change the world. If you want to be part of that change, please consider following the cast and creator’s Twitter feeds.

One reason I knew I had to do this show is because of the thoughtfulness that has gone behind it at every step. From Jennie Livingston, the director of Paris is Burning being a consulting producer; to their hiring practices in front of the camera and behind; to Ryan Murphy not only giving his entire salary for the show to LGBTQIA organization, many of which service people of color, but educating us about those organizations on his twitter feed, Pose is more than a show. It’s a movement! So if you feel the change this show is calling for is needed, start local. Hollywood, like politics, like so many things, is a reflection of society. So while you don’t have to give your entire salary to any of these organization, supporting them in any way you can change the world so that more shows like Pose, Queen Sugar, The Handmaid’s Tale, Atypical, Dear White People, and Insecure will be supported by the masses because the stories they tell won’t seem so foreign. We each have to be the change we want to see in the world. I’m so honored Pose gave me the opportunity to practice that.