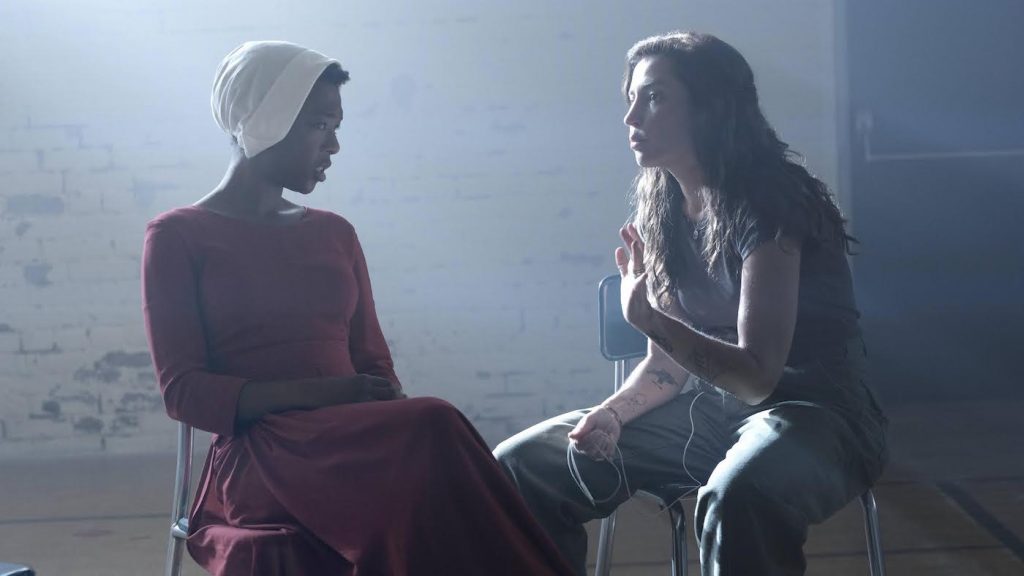 Fresh from their Peabody Award win, The Handmaid’s Tale returns for a highly anticipated 2nd season. Season 1, which was filmed before Donald Trump was elected, became more than just a cautionary tale after his campaign and first year in office. Though sometimes difficult to watch, it represents some of the best writing and acting on the small screen. It also affirms just how successful and multi-layered a show with a strong female presence, both in front of and behind the camera, can be.

Set in a dystopian future in which the rights of women are erased, the story is based around a society run by and for men. Rampant pollution and radiation have caused widespread sterility. Women able to conceive are forced to become handmaids, then held as sexual and reproductive slaves. Gay people are deemed “Gender traitors,” and are either killed, or taken as handmaids. Based on writer/producer Margaret Atwood’s 1985 novel, it is a grim take on where society can go when women’s rights are subverted in favor of religiosity and the whims of men in power.

Samira Wiley plays the handmaid Moira. A member of the LGBTQ community herself, she scored an Emmy nomination for playing the outspoken gay best friend of central character June Osborne (Elizabeth Moss). We spoke to Wiley about her perspective on religion, her character, and how the show amplifies current issues in our country and around the world.

You were raised by two affirming Baptist pastors. As an LGBTQ woman of faith, how did their support and your own beliefs inform your portrayal of Moira? Do you view religion as more good or harmful on balance?

I think people can feel a slave to their religion, or get so caught up in the rules they lose sight of the overall picture. My parents had a lot of trouble with the traditional Baptist model, and actually adopted another denomination, the National Church of Christ, which is a little more open and affirming. My mother taught me we are really meant to be followers of Jesus. Don’t look to the rules as much as what was in Jesus’s heart. What would he do in those situations, like in that saying “what would Jesus do?” We should ask ourselves what a person ruled by love would do. If you ask the deeper question, and put yourself out on a limb and see the bigger picture, with love as the center, the choices are clearer.

Do you feel that The Handmaid’s Tale is in conversation with the world right now? The timing of the series release is almost uncanny.

Our show parallels what’s going on in our world right now. It’s become a radical thing to act out of love. Living in love from the norm. Our entire society is acting out of fear. Really, we live in love or fear. We choose. Everything the government is doing seems motivated by fear and how we are different, rather than how much we are alike. In my belief, we are all made from the same God, and are here to learn how to live in harmony. I feel very passionate about that, which is why I’m so incredibly honored to play a character that can express these feelings on the show.

Season 2 shows sanctified placed and desecrated placed, and the turning of one into the other. In a way, that’s like your character Moira and her alter-ego Ruby. She has split herself to keep some places inside of her safe and sacred.

Moira is holding on to the identity of Ruby, who was created out of survival. You see her at Jezebel’s in season 1, and the horrible things she has to go through, the drugs has to take just to daze through the day, and it’s too much for her. She has to be someone else. But when she escapes into freedom at the end of season 1, she starts to live with these things that are wonderful on the surface.  She escapes this horrible regime where she’s getting raped every day. She doesn’t have to turn her head every two seconds to see who’s behind her. But she doesn’t know anyone. She’s a refugee. In season 2, there are a lot of refugee stories.  They escape into freedom, but they all have damage, and nothing is familiar.  Moira knows she can be Ruby if she needs to not be present. She can just step into this other person. I don’t think she is conscious of it until she verbally declares herself as Ruby. It’s survival. She can’t feel anything. Moira is dead when she’s in the Ruby space.

We learn so much more in season 2 about Moira. What questions floating in your head about other characters in the show would you like to have answered?

The writers are so amazing on this show and they’ve done such a great job of building these characters. Creating a world in the 2nd season beyond the source material that just unfolds slowly and is so rich… after you find these new things out, it just makes you even more curious. I have so many questions about Serena Joy. Who was her mother, and what was her family dynamic? My hope is Serena Joy just got in over her head and in the weeds, and didn’t realize what was going on. Really, if she had made a right, instead of a left, she could have been the heroine of the whole story. She’s amazing. It could still happen.

If you weren’t Moira, who would you be? Because, being honest with ourselves, if we are put in this situation in real life, who knows who we might become?

Who would I be? It almost makes me want to cry, to think about choosing. Because if I choose Moira, who I’m playing, then I’m choosing a life full of misery and horror, but if I take that other route, am I selling my soul? I hope people watching The Handmaid’s Tale will ponder questions like that. Who do they want to be in our own world?

Featured image: The Handmaid’s Tale — “Offred” — Episode 101 — Offred, one the few fertile women known as Handmaids in the oppressive Republic of Gilead, struggles to survive as a reproductive surrogate for a powerful Commander and his resentful wife. Behind the scenes with Moira (Samira Wiley) and Reed Morano, shown. (Photo by: George Kraychyk/Hulu)