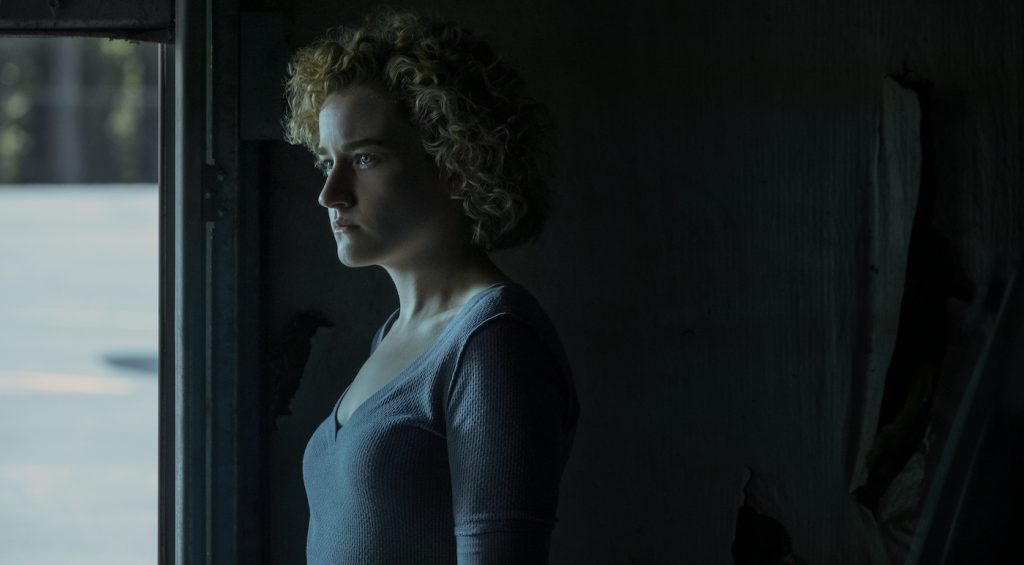 For reasons entirely to do with this crazy life we’re all living right now, I find myself revisiting the final scene of the great Three Days of the Condor. You know, the Robert Redford thriller that came out, like, before electricity. In the movie, Redford’s a CIA analyst who knows too much, and the CIA is hunting him down. In this climactic scene, he informs an adversary, played by Cliff Robertson, that he has a gun in his coat pocket and that he needs to walk with him for a little bit.

“West,” says Redford. “Slowly. Stay in front of me about three or four steps.”

“Make that six feet, fella!” I silently yell at my iPad. Remembering the eerie scenes of a practically empty Times Square we’ve all been seeing on CNN, I also feel compelled to urge all the New Yorker extras in the background to go home – now.

It’s a strange state of affairs to be forced to stay home. This lockdown of our usual freedoms has not only made us home hostages but has put an COVID-obsessive filter on everything.

As we watch shows and movies on our various home screens, it suddenly seems like characters are being wanton, selfish and reckless. What are they doing standing so close to each other? Did they get a test before they kissed? Why didn’t they wipe every available surface in their house before they went to bed? Or perhaps we are looking at those dramas with wistfulness. How nice to be in social gatherings! To have a meal in a restaurant! Will we ever be able to do that again?

With so much crazy time on our hands, we are also sharing in a fever-dream frenzy. Our collective curation of videos, memes, Instagram shares and so forth, include everything from those wonderful Italians singing to one another across the piazza to people washing their hands to A Little Bit Alexis from the TV show Schitt’s Creek.

When I saw a video of British popstar Brandon Flowers washing his hands and singing to his own hit song, Mr. Brightside, I shared that with a friend and diehard Flowers fan. She responded that she’d already seen it on Instagram “because, of course, I follow him!!!”

“How are you holding up in these strange times?” Emailed my friend. “Miss your face.”

The COVID-19 New Normal has come to this.

Of course, we are all negotiating our personal ways through this, individually and collectively, as we attempt as a global community to keep ourselves corralled. And that includes curating our own entertainment, which has now become its own round-the-clock task.

As a former movie critic for more than 20 years for the Washington Post, and a regular moviegoer and television watcher for the past 12, I’ve taken the liberty of sharing a representative curation of my own. This is just a random sampling of films and TV dramas I’ve enjoyed in recent years, and it’s meant as no more than a trigger for you, either to watch them or curate your own choices. Many of these you may already have seen, but with more time available than you may be getting for a lifetime, these are worth a second look too.

I thought we could start by addressing the post-apocalyptic theme head-on.

Many folks seem to be flocking to stream dramas with post-apocalyptic themes, from Contagion to I Am Legend to World War Z. But if there is one television series that may be the best way to process what we are going through, it’s Craig Mazin’s HBO series Chernobyl. While it retells the horrifying chain of events that led to the world’s worst nuclear disaster in 1986, its real story is about our response to the unthinkable. Its heroism is marked by how quickly we surrender to the truth instead of clinging to false security.

While the real Chernobyl incident was taking place, film director John Boorman was shooting a movie that was part autobiography about his childhood experiences during the Blitz in World War II. The result is his 1987 film Hope and Glory, a lovely story that turns the apocalypse into a mere backdrop to showcase the resilience and indefatigable good spirit of human beings. There are so many scenes to savor: A group of schoolchildren forced to recite multiplication tables in gas masks. A handsome German flier who falls from the sky, landing before a gathering of curious Brits. And a memorable mom (Sarah Miles) who wonders if a can of jam found on the beach might have been poisoned by the enemy. “They know we’re mad on jam,” she says.

It’s always a pleasure to watch lovable rascals, who use their natural abilities to get their way out of trouble.

In Better Call Saul, AMC’s spinoff and prequel to its own hugely successful Breaking Bad, Bob Odenkirk plays the eponymous criminal lawyer for hire who’ll stop at almost nothing to represent his clients. Which is a good thing considering he gets caught up in the dangerous underworld of drug trafficking. He’s something of a Bugs Bunny in plainclothes, a trickster who always finds a roundabout way to win. His relationship with girlfriend and fellow attorney Kim Wexler (Rhea Seehorn) is modernized screwball deadpan comedy at its best.

Actor Julia Garner is all trouble, edgy charm and bouncing curls, in Netflix’s Ozark. As Ruth Langmore, a 19-year-old woman, she doesn’t let living in a trailer with her family get in the way of her ambitions. The New York Times described her character well, saying she is “routinely smacking down — literally, strategically or rhetorically — derisive men who mistake her delicate features and springy curls for weakness.” Of course, the series itself, starring Jason Bateman and Laura Linney, and now starting its third season, is terrific.

This will sound weird, but then these are weird times. Consider this as much warning as a recommendation. On one level, A24’s Uncut Gems is the most infuriating and anxiety-provoking movie in a long time. I watched a cluster of people walk out of a screening, shaking their heads. Why? Because the central character, played by Adam Sandler, is so devoid of our sympathy. But Sandler’s portrayal of a gambling addict obsessed with making the big score at any cost, with any number of false promises made along the way, is his best screen performance since 2002’s Punch-Drunk Love.

Taking the idea of us all being stuck indoors, these three dramas make powerful stories of central characters who, in very different ways, work from the inside.

Thomas Cromwell, as depicted in BBC’s Wolf Hall, is King Henry VII’s master manipulator. Think Robert Duvall’s magnificent consiglieri character in The Godfather, except in a Tudor doublet. As the one who helps the king steer his way out of that tricky annulment imbroglio with Catherine of Aragon and the Pope, among many things, Mark Rylance produces my personal favorite male performance in a television series of all time.

Claire Foy, who plays Ann Boleyn in Wolf Hall (a great performance there too), plays perhaps the ultimate royal insider in BBC’s The Crown. This is a very difficult role to break open: a monarch who has been raised to only present her ceremonial best to people. But inside that seemingly undaunted exterior, Foy provides a full palette of universal human emotions from base jealousy to inspiringly unconditional love.

The Lives of Others, which won the Oscar for Best Foreign Language Film for 2006, is something of a Cold War companion piece to Francis Ford Coppola’s brilliant The Conversation. Set in the former East Germany, it’s about a STASI secret service agent who is assigned to electronically eavesdrop on a playwright and actress who are under suspicion for being potentially disloyal. But he must come to terms with an unpalatable truth: that two people who should be subversives, just aren’t so. As a political ideologue who is transformed into a compassionate human being, his situation becomes, to put things mildly, existentially awkward.

Since we can’t gather in social clusters the way we love to do, this is a great opportunity to vicariously enjoy networks of characters as they blend, bicker and banter. Of course, there are many great examples of this, from TV’s The Wire, Deadwood and Big Little Lies to movies like Pulp Fiction, Magnolia and Inglourious Basterds. (See what I did there? That’s six bonus recommendations.)

There is no finer ensemble-auteur (yes, we get to make up new hyphenates in the brave new world) than Aaron Sorkin, whose list of credits include the West Wing, A Few Good Men, and scriptwriting credit for The Social Network. In his TV series The Newsroom, Jeff Daniels presides as a verbosely sage TV news anchor, surrounded by a rich tapestry of other characters who enter and exit this bustling, deadline-manic world with Sorkin’s quintessentially funny and insightful-on-the-fly dialogue. For my money, the scene-stealer par excellence is Olivia Munn. As a socially inept economic news presenter, her rapid-fire rejoinders had me all but standing up and applauding.

A South Korean movie. With subtitles. Winning what you might call the Oscar grand slam: Academy Awards for Best Original Screenplay and Directing, and for Best International Feature Film and Best Picture. There’s a reason for all the success surrounding Parasite. Bong Joon-ho’s movie about a destitute Korean family that works together to milk maximum advantage out of a wealthy family isn’t just a searing and timely meditation on socioeconomic injustice. It’s a visit with richly drawn and unforgettable characters who are caught in unexpected circumstances. This “comedy without clowns and tragedy without villains,” as Bong described his film, is one of the most startlingly original takes on family life you may ever see.

So, as you sit at home in your onesomes, twosomes or strategically selected moresomes, maybe you’ll be inspired to watch these recommended dramas, or simply get your own curator’s mojo on.

Happy programming and decision making, and may the force be with you!

For more on our COVID-19 related coverage, read this piece about how the pandemic is effecting below-the-line filmmakers. Or see how the entertainment industry is coming together by being apart, and sharing crucial information on their platforms. Or hear from cinematographer Kira Kelly about her new show, Netflix’s Self Made, and how the novel coronavirus has affected her upcoming projects.