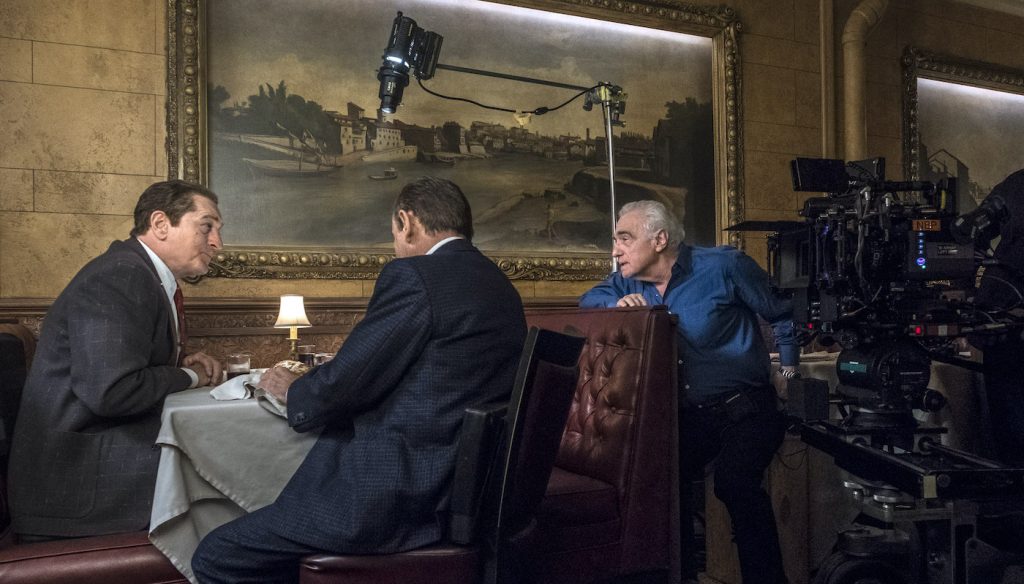 Three-time Oscar winner Thelma Schoonmaker‘s association with Martin Scorsese even pre-dates his storied collaboration with Robert DeNiro. She edited his Who’s That Knocking At My Door in 1967, picked up the first of eight Oscar nominations for editing Woodstock, went on hiatus for a few years, then returned to the Scorsese fold in 1980 to edit his famously brutal Raging Bull. Since then, Schoonmaker’s cut every Scorsese movie, and she’s nominated for her work The Irishman, which nabbed 10 nominations in total, including Best Picture and Best Director.

Touching down in Los Angeles for a round of awards season festivities, the 80-year old New Yorker shown no sign of fatigue from her cross-country flight. Speaking with the energy of an eleven-year-old, she zoomed in on The Irishman and zoomed out to offer her perspective on American cinema’s most enduring collaboration.

You’ve been working with Martin Scorsese —

You can call him Marty!

Marty’s mellowed to a certain extent, but that doesn’t mean he’s softened, at all. As we broke this film together, it was still fascinating for me to see the fertility and creativity of his mind, and the toughness with which he approaches his own footage. He’s very tough on himself.

He also demands a lot from cast and crew, given his reputation for shooting a lot of takes. Did that practice continue on The Irishman?

In The Irishman, Marty was actually shooting less. De Niro had been thinking about his character Frank Sheeran for such a long time that we often used the first take, whereas, in earlier days, there was so much experimentation. For example in Raging Bull, that final scene where Jake LaMotte confronts himself in the mirror? They did fifteen takes, all different versions, warmer, colder.

It must be exciting editing a Robert DeNiro performance?

Working on Raging Bull I found it hard to look at anybody else when he was in frame because Bob was so riveting, so truthful, and, well, mysterious. It’s hard to describe what he does. When we started working with him again after such a long time, I wondered, will he be as brilliant as he used to be? And you know what? He’s even better. He’s staggering in this part. I don’t know if everybody sees it yet because it’s so subtle, but they will, with time. So much of what Bob’s feeling is on his face.

Did you edit The Irishman with a different tone in mind, compared to Scorsese’s previous gangster films Goodfellas, Casino, and The Departed?

The Irishman is Marty’s final statement on the Mafia, which is: Bob, sitting in a nursing home with nobody there. His family doesn’t want to see him. He’s alone. And that’s how you end up when you commit yourself to a job like that, as a hired gun. Marty tried to make that statement in Goodfellas, but everybody loved that movie so much they all wanted to join the Mafia! The food! The music! But this one really does make that statement, I think, in a very subtle way. That’s why the long, slow build is so important.

Scorsese uses songs in his movies like nobody else. How do you go about cutting scenes to music?

In The Irishman, Marty wanted to use music from the various decades that he and I both remember. Sometimes [on his movies], we’ll try two or three pieces of music before one of them clicks. But on The Irishman, he had a very strong feeling early on about all that pre-recorded music. For example “In the Still of the Night,” which opens and closes the movie. I asked him ‘Why did you pick that piece?’ and he said, “Because they kill at night.” Putting music to film, Marty wants to affect you deeply, but not in a sentimental way.

Screenwriter Steven Zaillian did a great job with the dialogue but sometimes the music or the look on a character’s face speaks to the audience in a very powerful, non-verbal way.

And that’s because Marty hates when movies tell you what to think. With The Irishman, he didn’t want to make a documentary about Jimmy Hoffa. He wanted to make a story about this [hitman] character who’s committed himself to this life, so he didn’t want to explain a lot. He has high respect for the audience. He said, “They’ll figure it out themselves.”

Collaborating on a film, how do you complement what Marty already sees in his head?

He has said that I bring out the humanity in his movies. And Marty wants a cold eye on the dailies because sometimes I’ll see something that he didn’t notice, simply because when you’re on set looking at a monitor, you don’t see things the way you do in the editing room. He trusts me completely. I edit in the morning and in the afternoon I’ll show him sometimes four or five different versions of how to approach a scene. We work the footage over and over again, constantly trying to make it better.

When you say “work over a scene,” what does that look like?

You might have several options for a line reading. We decide “Let’s go with this line reading.” Then you trim things down and shape the scene so it gets a rhythm and a flow. When do you cut to a close-up? When do you use a two-shot? There’s a long period of refining and shaping like the film is a piece of clay. That’s why editing is such a great job. You’re handed this raw material and then you shape it into something else.

Establishing the right pace must be of paramount importance?

Usually, you trim things down because you want the scene to move quicker, and yet the pace in The Irishman is slightly different from other movies these days. It is a bit slower, at times deliberately so. In the scene where Harvey Keitel is chastising Robert De Niro because he was supposed to blow up this laundry, we have long pauses because Bob realizes he’s in deep trouble. Those pauses are very important. Most editors would probably cut that scene quicker, but the pauses are what makes it work.

The Irishman runs three and a half hours, jumping back and forth between time periods spanning four decades. How did you approach transitions?

Sometimes we were very abrupt in changes [between scenes] in this movie because that’s part of the brutality of life in the Mafia. Marty also wanted to show the blandness of the violence. No flashy editing, no fancy crane shots, just one wide shot when someone gets killed. He very deliberately wanted the violence to be sudden, horrifying and over with quickly. That’s how [a hitman] thinks. There’s no morality. There’s no thinking about it. And that’s why you end up alone. Because you’re not thinking morally.

The Irishman pioneered a new approach to “de-aging.” How did visual effects supervisor Pablo Helman’s technology impact your edit?

The editing probably took about a year total because of the time it took to do the de-aging. After we had the picture pretty well locked, Pablo would send us an example of what he was working on and we’d maybe say “Could you put a wrinkle back in? Because we’ve lost a little bit of the acting.” Who knows where the acting is? It’s not just in the eyes. It’s also in the cheeks. Pablo designed the process especially for this movie, and boy does it work.

For more on The Irishman, check out the following interviews:

De-Aging the Iconic Actors of Martin Scorsese’s The Irishman