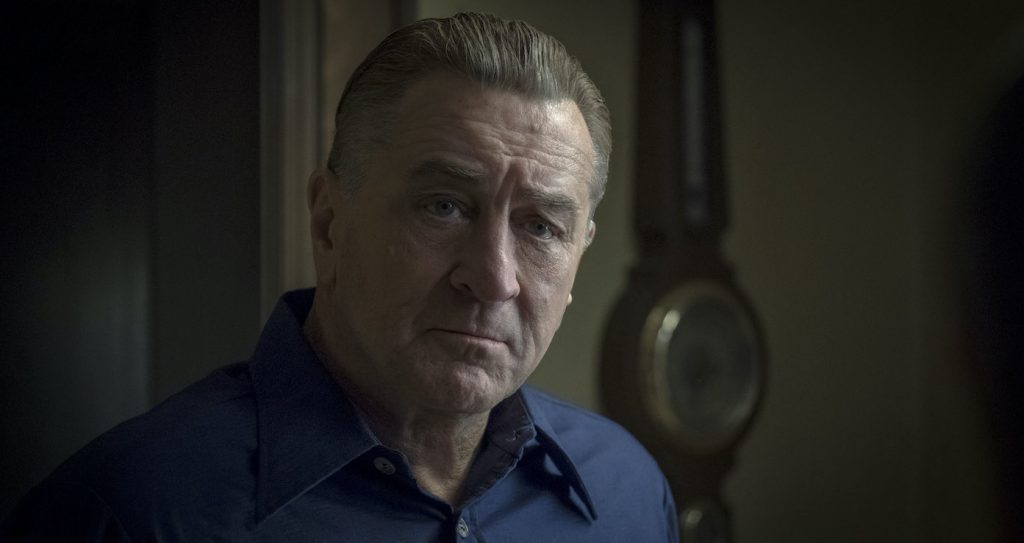 In describing The Irishman, Martin Scorsese’s latest feature, one word that keeps popping up is “epic.” And deservedly so. A sweeping three-and-a-half-hour saga, The Irishman explores the true-life story of Frank Sheeran, an organized crime figure and close confidant of Jimmy Hoffa, who rose to the top of the International Brotherhood of Teamsters. Ultimately, he betrayed his boss, orchestrating Hoffa’s disappearance and demise. Robert De Niro plays Sheeran. Al Pacino costars as Hoffa. After nine years of unofficial retirement, Joe Pesci returns to the big screen to play Russell Bufalino, the Philadelphia mob boss who introduced Sheeran to Hoffa.

The film flashes back and forward between an elderly Sheeran in a nursing home battling cancer (Sheeran died in 2003 at the age of 83) and key moments in his life throughout the 1950s, 60s, 70s, and 80s. Needing to convincingly play so many different ages, the 76-year-old De Niro, who was also a producer on the film, turned to Carla White and Jerry Popolis — his go-to makeup and hair team.

White and Popolis have worked with De Niro for over a decade, creating the actor’s onscreen look for such films as What Just Happened, Silver Linings Playbook, The Intern, and Joy. With the help of some groundbreaking visual effects from Pablo Helman at Industrial Light and Magic, they pulled off De Niro’s epic transformation for The Irishman.

Because Sheeran is not widely known, it wasn’t necessary to transform De Niro into an exact replica. “We didn’t want to plaster a look of somebody onto the actor’s face,” says White.

“I don’t think that Marty was 100% concerned that Bob look exactly like Frank,” agrees Popolis. “I think it was more of the feeling of who Frank was and what he was.”

Using photos provided by the Sheeran family, White and Popolis created a timeline pinpointing exactly how Sheeran looked at various stages in his life. The question was, could they make De Niro believable in those scenes?

White and Popolis’ primary task was to transform De Niro into the middle-aged Sheeran. White concentrated on the actor’s eyes and neck to shave off years. The bags under his eyes were masked with prosthetics created by effects artist Matt Mungle. The skin of his neck was pulled back with tape, which was also covered with prosthetics.

Details such as coloring, darkening the eyebrows and increasing beard tone completed the look. On average, the entire application took two-and-a-half hours.

Rather than relying on a wig, Popolis thought De Niro’s own hair would look more authentic. It was cut to match the way Sheeran wore it in the 1960s and 70s.

Opting out of the hairpiece upped the degree of difficulty. “Because he wasn’t wearing the wig, we couldn’t use lifts,” explains White. “Usually you use them to pull the skin up and then you can secure the lift under a wig. We could have pulled up his forehead and that kind of thing.”

The middle-age scenes alone span 20 years. Subtle adjustments showed the passage of time. White altered the neck wrinkles by loosening or tightening the tape. More tweaks were made through makeup coloring. Popolis shifted the hair from dark to grey. “20 years is a lot to cover,” he says.

But White and Popolis knew that their talents could only take De Niro back in time so far. That’s where ILM’s Helman came in. He had been experimenting with facial capture technology for several years. Scorsese learned about Helman’s work when the two collaborated on Silence. Scorsese wondered if the effect would work for The Irishman.

Helman agreed to give it a try. De Niro didn’t want it to hamper his performance, so the challenge was to map the actors’ features during normal filming without attaching markers. It took two years to develop the revolutionary process, which included a three-camera setup that incorporates a pair of infrared cameras. Facial movements captured on set and converted into 3D geometry that could be digitally altered created the youngest versions of Sheeran, Hoffa, and Bufalino.

“They did a test to see if they could realistically de-age Bob further than we could with the makeup. And they determined they could,” remembers White. “We worked with Pablo to decide at what point we would make the transition from pure CGI into makeup.”

For the CG scenes, De Niro wore no makeup. Instead, White applied a cream to give his face a matte finish. It made reading De Niro’s features easier for the cameras.

With a grueling 108-day shooting schedule spread out over 117 locations, White actually enjoyed the days where the effects stood in for the makeup. “I didn’t mind,” she says. “The other days were so intense, it was actually like a little vacation for me.”

On the other hand, Popolis didn’t get a break. De Niro wore a wig for these younger scenes. “You can’t CGI hair, so I had to have one made,” says Popolis, adding that Peter Owen created all of De Niro’s wigs for the film. This posed a unique situation in itself.

“When we tested it, Bob wasn’t used to it. It was kind of disconcerting to see young hair on an older face,” explains Popolis. “I have grey hair. If I were to put a dark wig on, I would look at myself and say, ‘Oh yeah, it looks like a wig.’”

Popolis put the actor at ease by showing him how the hair looked on film. He compared the wig’s hairline with photos of De Niro at that age and pointed out the thicker edges and similarities. Once he saw this, De Niro was comfortable wearing the wig.

For the final scenes of Sheeran’s life, White and Popolis took De Niro in the opposite direction.

“Frank lived into his early 80s. We didn’t want to push it too much, because he wasn’t supposed to be 90,” says White. “So we had certain things that did with his wigs and coloring to create that age.”

Popolis used two wigs. For the scenes in prison, Sheeran’s hair is white. As he’s still in relatively good health, the wig is fuller. When the action shifts to the nursing home, his hair is much thinner.

“Carla applied a bald cap under that so that it looks like he is losing his hair from illness and age,” says Popolis.

For the makeup, White basically reversed the process she had used to create the middle age Sheeran. Instead of downplaying the bags under De Niro’s eyes and the wrinkles in his neck, she used coloring to intensify them.

“We hadn’t seen that before because it was covered for the younger looks, so it was effective,” White explains. She also layered in age spots.

Because the aging wasn’t so extensive, the bald cap was the only prosthetic needed.

White and Popolis agree the sheer scope of the film added to the stress level. It was rare for them to be in the same location from one day to the next. That meant constantly packing and unpacking. On occasion, they had to create different versions of Sheeran on the same day.

“It could be scenes in a men’s club that spanned 40 years,” says Popolis. “So we’d shoot one Frank, take him back, completely clean him up and start over.”

White, who earned a MUAH (Make-Up Artists & Hair Stylist Guild) nomination for The Irishman, credits the man sitting in the makeup chair for inspiring her.

“Bob definitely likes to get as many details of the real character as he can. He does that with props and clothing,” says White. “He has specific ideas. But he also encourages us to come up with ideas and present things to him.”

Popolis seconds that. “Bob has a lot of input,” he says. “We go to his costume fittings because he wants us to see what he’s wearing. We do tests in his house and office. It gives us a heads-up to know where we are going and I think it makes him comfortable seeing his character being created. It helps him become this character.”

“He’s a dream to work with because he is so respectful of giving us the time we need to do whatever we need to do,” adds White. “He’ll sit and let us do our job. He’ll watch and he doesn’t complain. He’s just amazing to work with.”