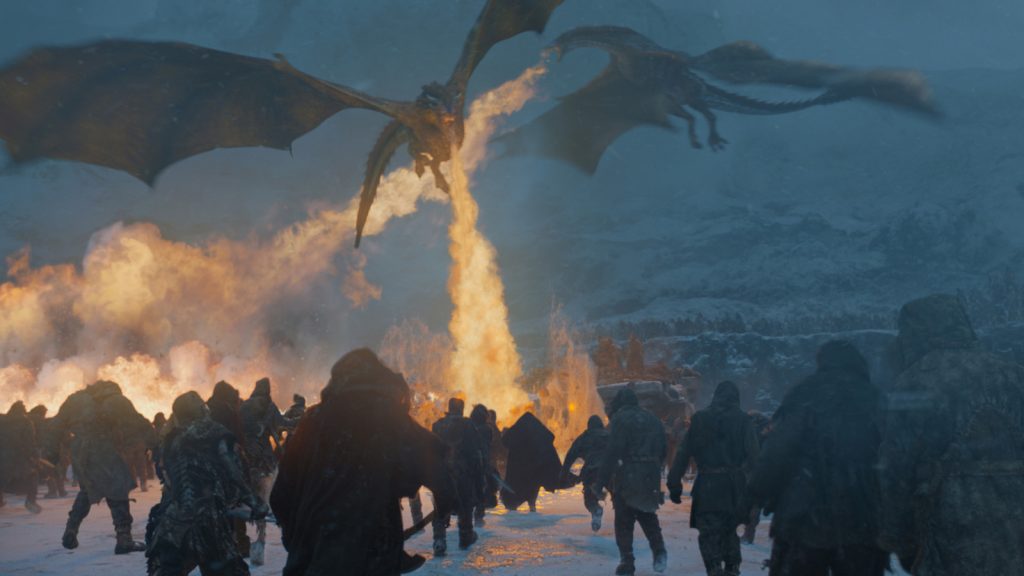 Game of Thrones is not the type of series to rest on its laurels. It has already made history, a few times over, during its run. Whether its making ratings history or creating the largest pyrotechnic stunt ever, GoT is always game to take it to the next level. The epic series is currently in production for its eighth and final season, and word is, they just completed filming the largest, longest battle sequence in the history of television. In fact, it could be one of the biggest battle sequences ever film, period. A member of GoT‘s production team, assistant director Jonathan Quinlan, posted on Instagram (it has, of course, been taken down) that they’d just gotten done a mind-blowing 55-night shoot for a colossal battle sequence. Quinlan’s post was a major thank you to the vast crew, who worked in sub-freezing temperatures for nearly eight consecutive weeks to film what will likely be the most massive sequence in the history of the medium, one that will not be bested for a long time to come. He was simply saying that in a year, when people are finally watching this jaw-dropping battle at home, they won’t be thinking about the hundreds of folks who were involved in the history-making shoot.

Just how crazy is a 55- night shoot? Consider that most entire films don’t take that long to film. Even in context of the many massive Game of Thrones sequences that have been filmed over the years, this is by far their longest, most involved shoot, more so than last year’s thrilling Loot Train dragon attack, or season six’s epic Battle of Bastards. Considering the final season will see all the remaining major players converging for what we think will be a single, brutal battle against the Night King, it makes sense GoT would be saving its biggest and best for last. But 55 consecutive nights of filming? That’s outrageous.

Yet for arguably the most ambitious show in TV history, there was no other way the production could end. They’ve been filming on multiple continents, shooting multiple episodes simultaneously for years now. When we talked to one of Game of Thrones’ most accomplished directors, Jeremy Podeswa, he had this to say about the production schedule: “The way the show is structured is that every director does two episodes, which is two hours, so essentially it’s like directing a movie. This show is so ambitious. We were shooting in multiple countries— Spain, Croatia, and Ireland. You’ve got this huge ensemble cast and this epic cinematic quality. So when you’re prepping and shooting, it’s like making a movie. Not a simple movie, either.” Folks, this was way back in 2015.

The fact this astonishing undertaking was conducted primarily at night tells you that the battle will almost certainly be one between the living and the dead, between the Night King and Jon, Dany and their armies. It’s insane to think we’ll be waiting another year to see it, but in the meantime, we’ll do our best to keep you up to date with the latest GoT news, making sure not to share any potential spoilers. Not that the Game of Thrones crew isn’t prepared for that, too.