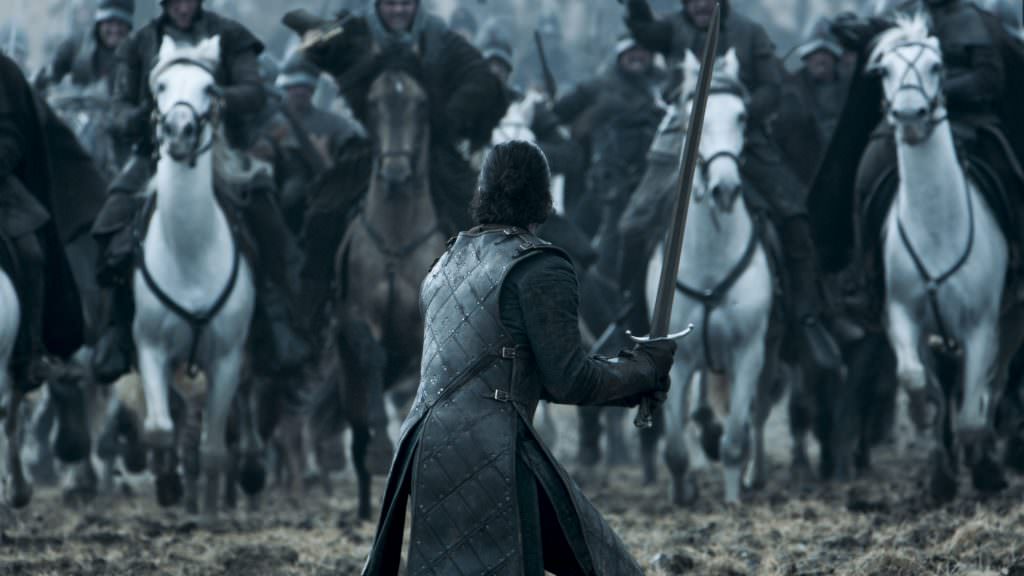 Game of Thrones Recap: Battle of the Bastards

Our long national nightmare is over. Well, one of them. In "Battle of the Bastards," Jon Snow fought valiantly, but stupidly, and was just about ready to die (again), along with Tormund, Davos, Wun Weng Wun and a few thousand wildlings (and a few dozen Bear Island men), but they were saved. Saved by Sansa Stark. The blue eyed bad ass was writing to Lord Baelish when we saw her with quill in hand in last week's episode, and thank the Lord of Light she did, because without the House of Arryn's horsemen arriving at the 11th hour, Jon Snow and whole of the Stark army would be dead. Instead, the soldiers from the Vale cut through Ramsay Bolton's encircling men and drove them back through the gates of Winterfell. And that's where we got the moment—actually, two moments—we've been waiting for; Jon Snow storming through the gates (with a little, actually, a lot of help from Wun), deflecting Ramsay's arrows with his shield, and beating the living sh*t out of that psychopath. And then, and then, Ramsay got his real comeuppance; Sansa fed him to his own dogs.

This is what Game of Thrones does to us; makes us stand up and howl with glee when a man is eaten alive by a pack of starving dogs. Congratulations showrunners D.B. Weiss and David Benioff! Well done George R. R. Martin! You've turned us into animals.

While "Battle of the Bastards" might represent the first time in GoT history that good really and truly triumphed over evil, a closer look might reveal a murkier picture. Sansa's satisfied smile as she walks away from Ramsay's screams indicate that even the very best characters in this show are, at a minimum, capable of bloodlust. This is a young woman who was, not so long ago, squeamish at the sight of blood. Now she's reveling in the gruesome torture and death of another human being. Well, Ramsay's not much of a human being, but still; Sansa has definitely changed.

The show's primed us to expect the worst, which is probably why Rickon's death felt so…thin. Of course Ramsay would dispatch Rickon in the most blatant, miserable way possible. Of course Rickon would die right in front of Jon and Sansa, who would be forced to watch, helpless and half a football field away. And of course Ramsay would kill Rickon so publicly because he knew it would drive Jon crazy, which it did, and make Jon do something stupid, which he did. Jon rushed towards the Bolton line with the fury of all the gods, including the drowned god, but it was his sister Sansa who knew how to play Ramsay's game. And by the time Jon was done smashing Ramsay's face into a cubist approximation of itself, of course it was Sansa would extract her revenge in the most narratively cathartic, sadistic way possible. Ramsay had set his dogs on countless people before, including feeding them the body of his former lover, so yes, this made narrative sense in the extreme.

From a technical point of view, "Battle of the Bastards" was fantastic. Director Miguel Sapochnik did a masterful job handling not one but two major battles in a single episode. "Battle of the Bastards" is not the first episode to focus exclusively on war ("Hardhome" and "The Watchers on the Wall" were both standouts, and both, like "Battle of the Bastards," the penultimate episode of their respective seasons), but this episode was larger and even more ambitious in scope than those previous, incredible examples. We got not just the face off (a literal face off when all was said and done) between Jon and Ramsay, but also the battle in Meereen between the slavers and Dany's army. Sapochnik's camera carries us, dragon-like, from the fireballs arcing over Slaver's Bay to the blood-soaked frozen ground outside of Winterfell and back again. There were several whoa moments of cinematic virtuosity; how about when Jon goes cutting his way through Bolton's men, or that frenzied bloodbath when he's trapped beneath a pile of writhing soldiers, or any one of the dragon shots? How about when it looks like Jon's going to be trampled by the onrushing Bolton cavalry, only to be saved at the last second by Davos and Tormund's charge? Epic stuff through and through.

While there was plenty for the eye to drink in, "Battle of the Bastards" also had a lot of meaty moments for the mind, too. The meeting between Dany, Tyrion, Theon and Yara was especially rich. Here we see Tyrion at his absolute best, serving his queen well; he questions the Greyjoy's with not a little amount of shade, ferreting out their true motives and seeing if they're fit to partner in her quest to rule Westeros. "We'd like you to murder an uncle or two who thinks women aren't fit to rule," Yara tells Daenerys, cementing her trust with a motive Dany can appreciate all too well. The old guards and gods of the Seven Kingdoms are finally under direct assault, especially the patriarchies that have run every edge of the realm since time immemorial. Tyrion might be surprise that Theon doesn't mean to rule, he means for his sister to, but Dany's not surprised at all. And while Jon Snow will get credit for the victory over Ramsay Bolton, it wouldn't have been possible without Sansa's masterful manipulation of the House of Arryn.

In Meereen, Dany proves once again to be very, very good under pressure. She stands her ground, deploys her dragons perfectly, and relies both on Grey Worm and the Unsullied and her Dothraki horselords to dispatch both the Sons of the Harpy and the masters. In Winterfell, Jon's bravery, as well as his skill with a sword, is nothing to sneeze at; but it's the chess masters like Tyrion (who sagely dissuades Dany from a full blown attack, which would have killed civilians) and Sansa who turn these battles into mind games, and win them. Tyrion and Sansa were briefly married, if you remember, and they respected each other then, and one believes if they are to meet again, that respect will remain.

The episode, written by Benioff and Weiss, gave us plenty of quiet moments to go along with the pageantry of all that bloodshed. One moment that stood out was Jon and Melisandre (who seems endlessly sad these days). She wonders if perhaps the Lord of Light brought Jon back to Winterfell only to die again. "What kind of god would do something like that?" he asks. "The one we've got," she replies.

This episode laid bare something that's been hinted out for the show's entire run; women are better leaders than men. They're better because they understand certain crucial facts about people, about living things, and what makes them loyal and what makes them rebel. Ramsay believes his dogs are "loyal beasts" and won't dare turn on him. Sansa understands the fallacy in his thinking and uses it against him. "They were," she says coolly, "now they're starving." In Meereen, look at how Dany's beasts respond to her. She has nurtured them, shown them love, and in return they fight for her with the ferocity of, well, dragons. As do the Unsullied and the Dothraki. Euron Greyjoy might command an army of men, telling them to build him a fleet of new ships, but Yara's men love her and will willingly die for her. Before Ramsay's turned into Purina puppy chow, Jon augers that all he and his men have to do is break the Bolton's army spirit, as none of those men remotely care about Ramsay. Had it come to that, I think that would have been proven correct. Sansa made this point moot by getting the House of Arryn to arrive at just the right moment.

"Battle of the Bastards" was an episode about men trying to prove they are leaders, that they are worthy heirs to the lands they mean to rule, and about the women who show them how to do that. And it was an episode about how these characters, specifically Sansa, have changed. Ramsay did unspeakable things in his life, and unspeakable things to Sansa. In a way, he broke her, but not for good. She has pieced herself back together, and although she's a different person from the one she might have become had her path not crossed with his, she's still standing, and she's stronger than ever. The old Sansa would have fled from the carnage of the battle or the first growl of Ramsay's dogs. The new Sansa, however, watched her former tormentor being eaten alive. And she didn't flinch.