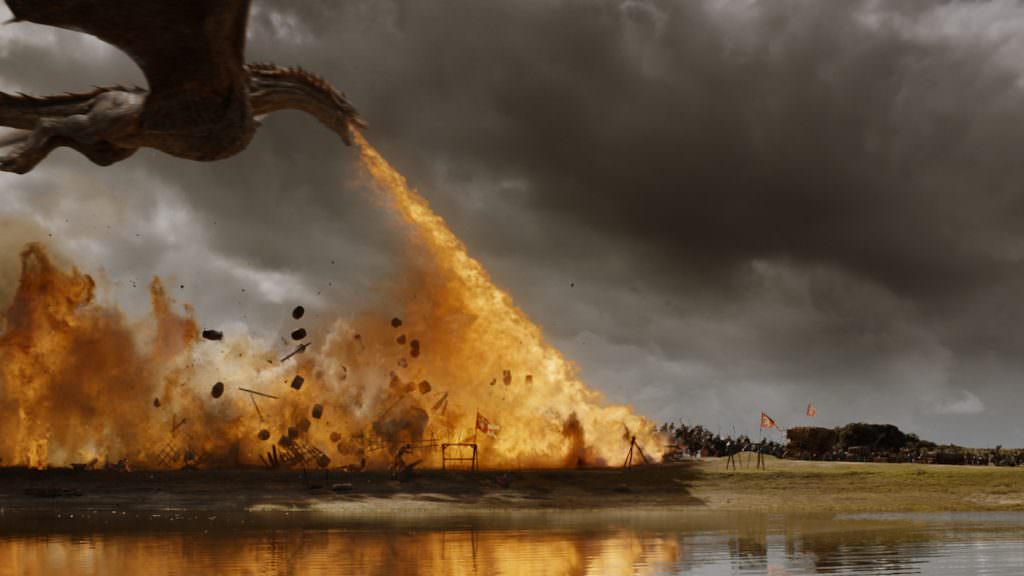 While we’ve written a lot about how extensive, incredible (and gross!) the practical effects are on Game of Thrones, the work done by the visual effects team is equally impressive. You don’t get to have a show with dragons, giants, direwolves, an exploding Sept of Baelor, and an army of 100,000 renanimated dead people without a really, really good visual effects team. As Game of Thrones has shifted from palace intrigue and mostly human concerns to the war between the living and the dead, and as Dany’s dragons have grown both in physical size and importance, GoT has relied more heavily on the work of companies like Deluxe’s iLoura.

This new video from Deluxe’s iLoura showcases their work, specifically the thrilling “Loot Train” sequence in episode four of this season, when Dany hopped atop Drogon and had her trusty, scaly flying steed torch a regiment of the Lannister army and their assembled, loot-filled carriages. The VFX company details the many shots in the sequence that were created entirely with CGI, including creating thousands of soldiers in combat (which meant greatly expanding both the Lannister and Dothraki armies), Drogon and his firey work, and a whole lot more. While Game of Thrones relies heavily on practical effects, stunt performers and many more “in-camera” effects, this video illustrates how a great VFX company like iLoura not only can add a massive dragon, but can greatly enhance the intensity on screen by adding layer after layer of nuance and detail. Whether it’s as simple (and it’s not simple, of course) as increasing the number of soldiers in battle, or as complicated (and it’s very complicated) of creating a very real seeming dragon doing very real seeming damage, there would be no GoT as we know it without VFX work like this.

Our favorite part is when they show how they created the moment in the featured image above—one of the most striking visuals in GoT‘s long history of creating just that.