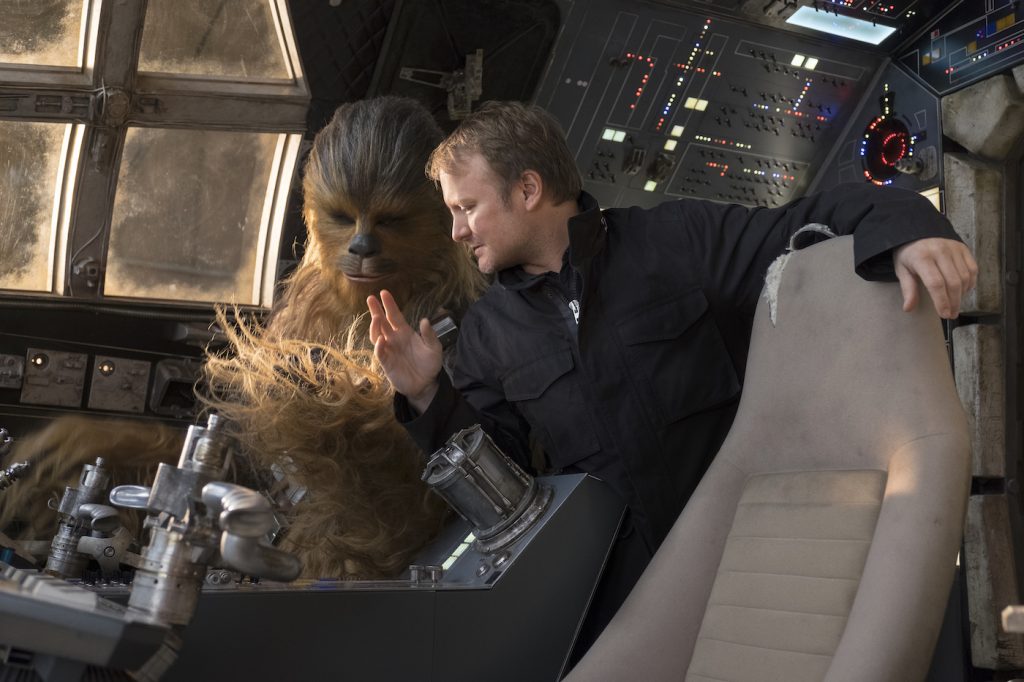 Star Wars: The Last Jedi‘s Blu-ray release comes with one of the most in-depth audio commentaries you’re likely to find. This is due to writer/director Rian Johnson’s love, and skill, at bringing people deep into his creative process. The Last Jedi Blu-ray release is especially robust, with Johnson’s detailed, delicious commentary joining a feature length documentary, The Director and the Jedi, that gives fans a comprehensive and compelling look at how the ambitious, surprising, and yes, somewhat polarizing film came to be. Johnson has been extremely open about his creative process since the film’s release, and whether you approved of Leia’s “sudden” powers or Supreme Leader Snoke’s fate, you cannot deny Johnson’s immense talent, nor his love and respect for the Star Wars franchise.

But don’t take our word for it. Here are some of the most interesting things we learned from Johnson’s audio commentary:

The Throne Room was Johnson’s favorite set. He says it’s all practical. They strung up a big red curtain in the background so everything in the shot except Snoke is real.

We know how much work was put into creating Supreme Leader Snoke, so it’s nice to know that the rest of the set was real and practically created. There is no denying how much the scenes in Snoke’s Throne Room pop; it instantly became one of the most memorable locations we’ve seen in the galaxy. And, as we wrote yesterday, the fight in Snoke’s Throne Room is, in our mind, one of the greatest scenes in Star Wars history.

Johnson cannot get through the “Chewbacca almost eats a porg” scene without giggling.

Many fans enjoyed the introduction of the small, furry porgs, who may have broken the record set not too long ago by The Force Awakens’ BB-8 on fastest to becoming a meme. The little creatures quickly become attached to our beloved Chewbacca, a somewhat surprising turn of events considering Chewie killed and roasted one of them—yet he couldn’t bring himself to eat it after seeing a very sad porg near tears over its lost friend (or relative). Viewers are apparently not the only ones who found this initial interaction rather hilarious. You know a scene is funny when even the director who’s seen it a hundred times still laughs every time he watches it.

Casting Kelly Marie Tran influenced the character of Rose. Johnson says originally the character was more of an Eeyore type, but Tran’s personality was infectious. The first scene between Finn and Rose was rewritten during production. Originally Rose was more suspicious of Finn, but seeing Tran’s personality, Johnson realized Rose would be more excited to meet Finn and open-hearted.

The relationship between Finn and Rose was an important part of the film, as fans got to watch their connection blossom into a beautiful friendship (some would argue it’s become something more). It’s good to know that so much of the character of Rose was influenced by Tran herself, a hugely talented actress who stood out as arguably the best new cast member in the film.

Johnson says every time Laura Dern fired a gun she said “pew!” which you can see in the movie.

This is definitely one of those “movie stars are just like us” moments. If it is acceptable for Laura Dern to go “Pew!” every time she fired a gun during filming, then it is most definitely acceptable to do it at the arcade. At least the actors were having fun on set.

Johnson knew he wanted to have a Luke/Leia scene in the movie. On the day of shooting the scene, he says it felt like church. Everyone was quiet and respectful. Carrie came up with the line about her hair and Mark came up with the idea of kissing her head.

We may have shed a tear or two during this emotional scene in the film, which fittingly came at the very end, and in the most intense, crucial moment. We’ve been waiting 34 years, since 1983’s Return of the Jedi, to see these two characters together. The moment struck a chord with audiences everywhere, and while we you can only imagine what the atmosphere was like on set that day, you have Johnson telling you what it was like—holy.

The Last Jedi will be released on April 9th on DVD, Blu-ray, 3D Blu-ray and 4K UHD.