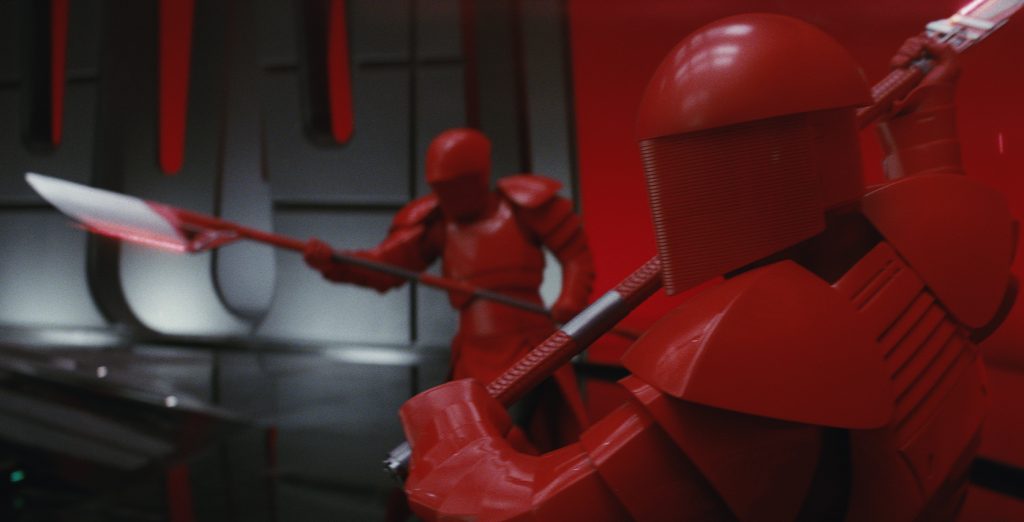 Watch one of the Best Scenes in Star Wars History

For all the thrilling scenes in writer/director Rian Johnson’s Star Wars: The Last Jedi, the climatic fight that took place in Snoke’s blood-red throne room was one for the ages. In fact, we think it’s one of the best scenes in any Star Wars film, period. It’s not only technically brilliant and expertly performed, its also narratively crucial and genuinely, deliciously shocking. This fight between brand new allies Kylo Ren (Adam Driver) and Rey (Daisy Ridley) and Supreme Leader Snoke’s Praetorian Guard is available, thanks to The Last Jedi’s release as a digital download (a ton of new features and behind-the-scenes videos are now available, like how they used real dogs to help create the crystal foxes on Crait). We’ve embedded the scene for you below, which you should absolutely watch so long as you’ve already seen the film.

This fight takes place moments after Kylo Ren’s shocking murder of his mentor and master, Snoke. The super elite Praetorian Guard spring into action with their various weapons, and greatly outnumber Ren and Rey. The Guards are cloaked in their red robes and armor, the latter of which is comprised of a high-tech onion-skin laminate that has conductive wirepaths embedded within that, once powered up, create a local magnetic field that can deflect blaster fire and glancing lightsaber swipes (a direct thrust from a lightsaber will, as we’ll learn at the scene’s end, penetrate the armor). The Praetorian Guard specialize in various martial arts, including Teräs Käsi, a form of hand-to-hand combat, and are armed with melee weapons. One of the guards wields a Bilari electro-chain whip, which functions as both a long rapier-like weapon and, once snapped by a Guardsmen, becomes a whip powered by an electro-plasma current. Another member of the Guard wields a double-bladed vibro-arbir blade. They’re all highly lethal and very motivated, thanks to Ren’s treachery.

The fight is a feat of breathtaking choreography, stunt work and incredibly committed performances by Driver, Rey and the stunt performers playing the Praetorian Guard (these include David R. Grant, James Cox, Florian Robin, Liang Yang and Karanja Yorke). Yes, we know there’s no way that Rey or Ren will die in this scene, considering they’re the new trilogy’s most important characters, but we just watched Snoke get sliced in half, and we thought was the franchise’s biggest villain. This made the outcome of the fight between Rey, Ren and the Guards feels joyously up in the air. Plus, the scene is simply gorgeous to look at. Watching Ren and Rey fight through the Guard in the red-walled throne room, fire and sparks from their lightsabers raging all around them, is a thing of brutal beauty. Then, there’s the scene’s incredible kicker, when Rey saves Ren’s life by tossing him her lightsaber, resulting in the best lightsaber maneuver of all time (in our humble opinion).

Check out the scene below: