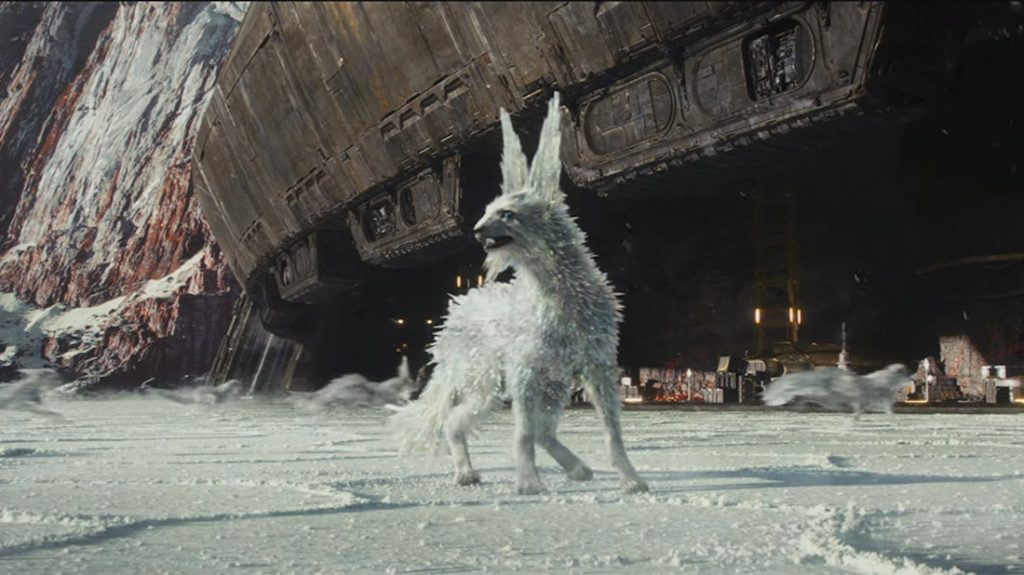 Star Wars: The Last Jedi‘s crystal foxes had a small but pivotal role in the film, yet they’d never have looked so glorious if it weren’t for a few very good and very real doggies that stepped in during pre-production to lend a paw. In a new video released online (a lot of great new material is surfacing thanks to The Last Jedi being available for digital download) you’ll see how writer/director Rian Johnson and The Last Jedi team used some canine friends to help create one of the film’s most memorable creatures.

The sparkly creatures (technically called vulptices, taken from the Latin word for fox) live on the planet of Crait, where the film’s epic final battle between the First Order and the cornered and depleted Resistance takes place. Crait is a remote, barren planet located in the Outer Rim Territories that is remarkable primarily for the way it looks; the planet is covered largely in white sand, with an incredible layer of red soil beneath it. (The scene was filmed on location in the Bolivian salt flats). The planet presented Johnson and his team the ideal environment to create arguably the film’s most stunning effect—animals that looked like they belong on a uninhabited, mineral-rich, barren environment.

“Working on the design of Crait, I wanted creatures that felt indigenous to the planet,” Johnson says in the video. “I wanted something that felt like a part of the landscape and that really belonged there.” Tim Napper, a creature concept designer for the film, said that Johnson’s starting point for them was to “think of a creature that had taken on its environment physiologically, biologically, into its body.”

The video shows some of the early designs for the foxes, which were a whole lot less elegant than the glittering, sleek versions you saw in the film. Yet even in the early work, you see the other-worldly-yet-beautiful animals that eventually made it onto the screen, albeit rougher and darker than the ones Johnson ultimately signed off on.

But the best part of this video is watching how they figured out how the foxes would actually look moving and running with their crystalized bodies. This is when The Last Jedi team outfitted actual dogs in what appears to be crystal sweaters and filmed them running around. There is nothing dogs can’t do, which includes helping filmmakers create one of the most incredible creatures in any Star Wars film.

The crystal foxes prove crucial to the Resistance’s escape; Leia, Poe and the rest of the survivors follow the foxes through their cave hideout to what they hope will be an exit. The problem is that, while the foxes can squirm there way through the very small opening between some boulders at the back of the cave, no human could possibly fit. Cue Rey, on the other side of the rocky divide, using the Force to lift the boulders and free her comrades.

Check out how the The Last Jedi team, with the help of some canine friends, were able to breathe life into the foxes, combining practical effects, special effects, and some very good boys (and girls) in yet another astonishing achievement.