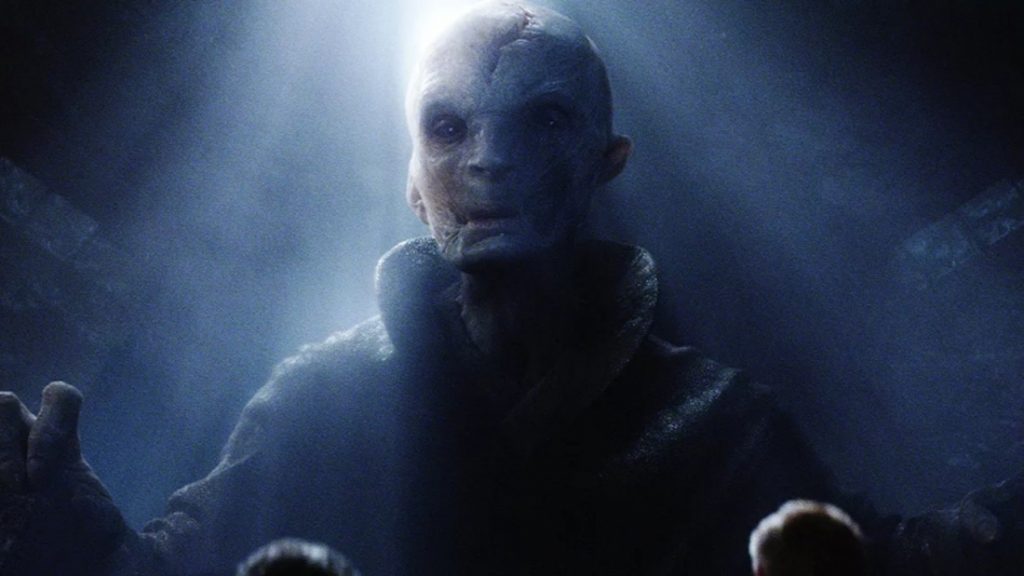 For some Star Wars fans, the life and death of Supreme Leader Snoke (Andy Serkis) was a slap in the face. Introduced in The Force Awakens, Snoke was, in their view, supposed to be a next generation Emperor, a villain so powerful even the most potent Sith Lord (Darth Vader in the original trilogy, the wannabe-Vader Kylo Ren in the new one) would bow down to him. And for a time, this reading of Snoke seemed entirely credible. He appeared only in holographic form in The Force Awakens, but director J.J. Abrams made clear he was the main villain. Both Kylo Ren and General Hux (Domhnall Gleeson) paid fealty to him. Heck, Snoke’s voice was the very first thing we heard when The Force Awakens’ original teaser was released. Clearly he was going to be the new trilogy’s main villain—he has “Supreme” in his title, after all.

Then The Last Jedi happened, and finicky fans weren’t having it. Kylo Ren, the trilogy’s actual main antagonist, dispatches Snoke fairly early in the film (in one of the best scenes of any Star Wars film, full stop.) Those in the angry camp felt that Snoke’s death was a bait-and-switch, that he’d been built up like a major player only to be sliced in half early on in the second film. Our answer to this is, well, yeah. We find it a lot more intriguing to follow Kylo Ren’s frenzied internal struggle, his pull towards the Dark Side almost mitigated by the remnants of humanity that are left within him, than to adhere to a template from the original trilogy. Yes, Snoke seemed like he was going to be another Emperor, but ask yourself this; why do we need another Emperor? We’ve done that before, and Rian Johnson was clearing going in a new direction in The Last Jedi, one in which there need not be some supreme overlord, and further, where the Force is not only accessible to a small number of elite beings.

Ren’s halving of Snoke was both a petulant “you will not tell me what to do” display of power and an earnest desire to protect Rey. His decision to not fire from aboard his TIE Silencer while he had his mother, Leia, in his sights is further proof of that struggle. So from a narrative standpoint, we were always fine with Snoke’s demise. He’s the second mentor that Ren turned on (Luke being the first), and the second father figure that Ren killed (R.I.P., Han.)

And now comes Snoke himself, Andy Serkis, explaining to Entertainment Weekly that contra to the angry fans who felt his character was wasted and/or used as bait, there was a lot of discussion about his backstory. What’s more, Serkis, J.J. Abrams and Rian Johnson have not left open the possibility that Snoke’s story isn’t over—maybe.

“We wanted him to have a great deal of mystery, but we did … J.J. [Abrams] and I discussed it, and Rian [Johnson] and I did discuss backstories to him, where he came from. I’ve been asked to not shed anything, should we want to bring him back in any way whether [in a] prequel or whatever. I think there’s something cool about that. It still does remain a mystery for people. I know that some people find it incredibly frustrating, but I think it allows for further exploration and layering at a further point.”

While Snoke can’t come back in Episode IX (at least, not in the flesh, there’s always flashbacks), the Star Wars galaxy is expanding, and films that are set before the events of The Last Jedi offer the opportunity to revisit Snoke, find out more about him, and, perhaps, give those aggravated fans the Supreme Leader they feel they were promised.