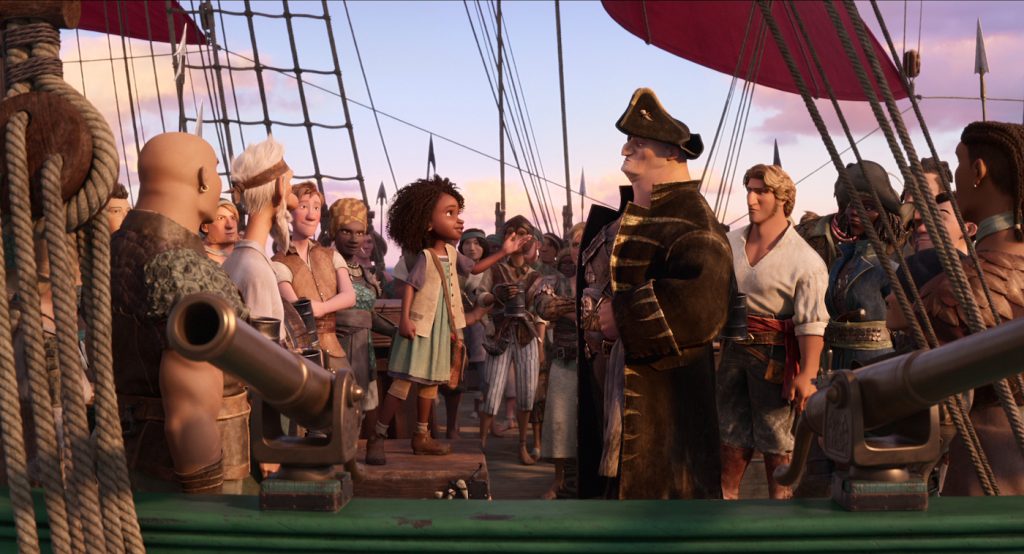 Chris Williams began working on The Sea Beast around four years ago, but telling an action-adventure story in animation is something he has wanted to do for a very long time. “It’s almost no exaggeration to say most of my life,” says the Academy Award-winning filmmaker (Moana, Big Hero 6, Bolt) about his latest movie, now streaming on Netflix.

Directed, co-produced, and co-written by Williams — he collaborated on the screenplay with Nell Benjamin, a writer and composer of musical theater — The Sea Beast follows Jacob Holland, known for his legendary prowess in hunting sea monsters, and Maisie Brumble, a young stowaway on Jacob’s ship, as they begin a life-changing journey together on the high seas. Karl Urban (Lord of the Rings) and Zaris-Angel Hator (Morbius) play the leads alongside a supporting cast that includes Jared Harris (Chernobyl), Marianne Jean-Baptiste (Blindspot), and Dan Stevens (Beauty and the Beast).

Being a member of the animation community is clearly still a thrill for Williams, as evidenced by his enthusiasm for the art. “It’s a great time right now to be working in animation because you just feel everyone kind of push the boundaries and redefine what animation can be,” he notes. “We’re all rebelling against the idea that animation is a genre and that all animated movies are the same and should all reach the same audience. I hope that [The Sea Beast] can be part of that.”

The Credits recently chatted with Williams about his inspiration for the film, the design of his star sea monster, and the importance of collaboration in animation. This interview has been edited for length and clarity.

What inspired this story? I see the influences of King Kong and “Moby Dick.”

Correct (laughs). Yeah, it’s definitely a movie where I didn’t mind wearing my influences on my sleeve. Certainly, when I was a kid, King Kong was one of my favorite movies. I know the 70s version is not considered the best version, but it was my version, and I loved it. And I also loved the old Harryhausen stop-motion films: Clash of the Titans, the old Sinbad movies, all those classic action-adventure fantasy stories. And then Raiders of the Lost Ark was a big lightning-bolt moment for me. As a kid, I loved visual storytelling. I used to draw all the time, and I used to make stop-motion movies with my dad. But I remember the experience of being in a theater and watching Raiders of the Lost Ark and just being so enthralled with it but also feeling this is what I want to do; I want to make movies. I love adventure stories where characters leave the known world and venture into the unknown, and so I wanted to make a movie that would capture the spirit of those films.

What impact did your other roles as director and co-producer have on the storytelling?

Well, the directing process was not unlike other movies that I’ve worked on. I think animation is the most collaborative art form there is. It kind of boggles the mind when you think it’s one work of art that takes shape over the course of many years and involves hundreds of artists. As a director, I always have to be able to articulate what I think is the best version of the movie, scene, or moment at any given time. But I also have to be receptive to other points of view and other ideas, and if someone has a fantastic idea, then guess what, it’s in the movie. Working with the story team and Nell [Benjamin] as well, we had a great back and forth. A lot of it was remote, especially with the pandemic happening, so for nearly two years, we were working through a lot of Zoom conversations. It’s all about just creating an environment where people feel comfortable challenging assumptions.

The movie’s female lead, Maisie, is a person of color and a young girl. Additionally, Sarah Sharpe, the captain’s right hand, is also female and a person of color. Were these decisions intentional from the outset or did they come about as you were writing the story?

Boy, when you say intentional, it gets so complicated, doesn’t it? Because on some level I think it’s nice to think in terms of colorblind casting, that a hero can be of any ethnicity, right? But sometimes you think there’s a lack of balance, and you start to cast more intentionally. This is a movie that takes place with the technology of around 1700, so it’s obviously not our world, and it’s not our planet. It’s a fantasy world and so we made a decision early on that the crew of the ship would be all of different ethnicities and genders and, in making that choice, we were able to make the ship’s crew more resemble our world today. That was something that we were all really excited about. It wasn’t going to be all white men. We knew we had a white male lead in Jacob and wanted to create a nice balance with Maisie.

Speaking of Jacob, he undergoes a transformation, thanks to Maisie and the Sea Beast.

That, I think, was so much of the fun. The center of the movie, the center of the plot, and the center of the emotion is the Jacob and Maisie relationship. We were so lucky with the actors. First, Zaris-Angel Hator, who plays Maisie, was just incredible. We didn’t want to cast someone older who was pretending to be young, we wanted an authentically young actor. Obviously, Zaris-Angel was sophisticated beyond her years as an actor and was able to really create an amazing character and really articulate powerful moments along the way. And Karl Urban, who plays Jacob, is so much fun and can be self-effacing. Jacob’s definitely a good-hearted and courageous guy. He cares about other people and wants to keep them safe. But he’s also very powerful and used to things going his way. So it was so much fun to basically throw Maisie at him. She starts spinning circles around him, and he’s just not used to that, and Karl knew just how to play that. I think the dynamic between characters is more important. Characters have to be foils for one another, and I think Jacob and Maisie bring the best out of each other because they’re always pushing on each other.

What went into determining the design of Red, the Sea Beast? I read in the end credits that you enlisted a marine biology consultant.

Everything with animation, especially in a movie like this where world-building was so essential, all starts with research. So when we got to design Red, a creature like this that lives in the water, we first looked at sea animals in our world. We looked at walruses, seals, sea lions, whales, of course, penguins. We looked at lots of animals that can go up on land but primarily live in the water and are more comfortable in the water. And we saw right away one of the most critical aspects was that it needed to be very streamlined, very sleek. It had to have a very frictionless design to be pushing through the water and not expend too much energy. Then we thought of her as the queen of the monsters and wanted to give her a very regal and noble bearing, so we looked at lions and tigers. Her general demeanor was very much informed by lions. And we also knew, because she had to pull her massive weight across the ground, that she’d have to move like a gorilla, so we gave her these really powerful shoulders as well. A lot of different elements went into it.

The animation is incredible. In many scenes, it’s like you’re looking at a live-action film. You spent years at the most prominent creator of animation, Disney. What was it like working with Netflix Animation and Sony Pictures Imageworks? How was that transition?

For me personally, it was a seismic change in that I’d been working at Disney Animation for nearly 25 years. I’d known and worked with people for decades, and I’d had a great experience. I was always treated very well and worked on movies that I’m really proud of. That was almost a double-edged sword of it. I was concerned that I was getting too comfortable, becoming complacent, and I really wanted to throw myself into something very different. And so I looked around to see what else was out there and saw that Netflix Animation was just getting off the ground. I remember that very first day I drove to work, not to Disney Animation after 25 years but to Netflix, I parked my car, and I realized I was a crew of one at that point. That felt very unfamiliar, and I realized that I had a lot of work to do just to try to assemble a team that was going to make the movie. Ultimately, we partnered with Sony Imageworks, and they have a lot of experience working on big movies as well as live-action event movies with lots of big special effects, so they were primed and ready for a movie like this. Things I’d worked on in the past were primarily comedies, going from laugh to laugh, whereas in this movie, it was more of an action-adventure with a stronger sense of peril, and that was going to be the primary source of engagement. Of course, we want to have fun and funny moments along the way, but we’d sort of get there when we get there as opposed to feeling there’s an urgency to get there. So tonally, it was a different beast for sure.