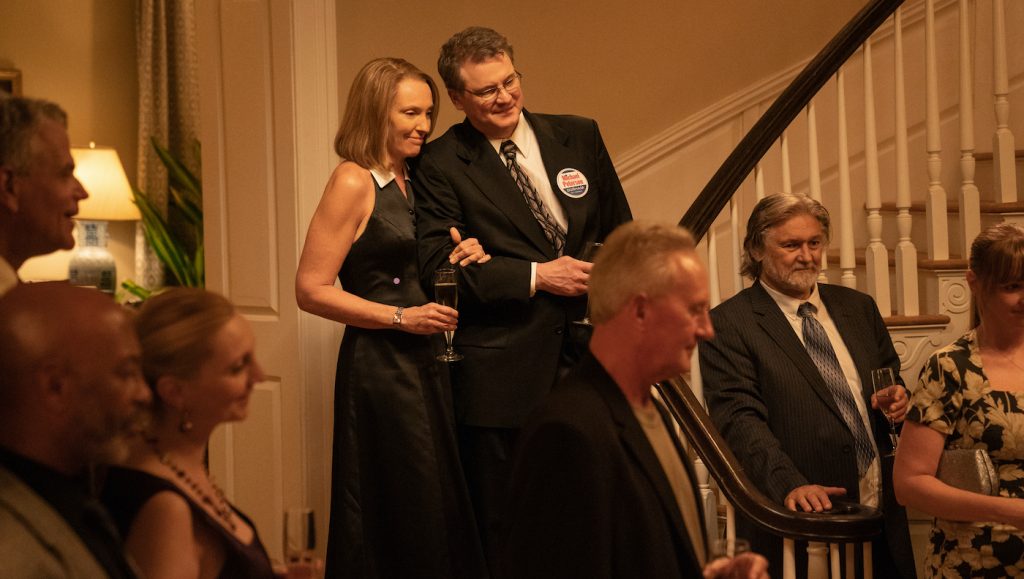 Writer/director Antonio Campos (The Devil All The Time) first began thinking about adapting the iconic docu-series The Staircase back in 2008. As a young, up-and-coming filmmaker, Campos imagined adapting the French series, centered on the sensational trial of American novelist Michael Peterson, accused of killing his wife Kathleen, in 2001, into a feature film. In fact, the French doc itself was meant to be a feature, but after director Jean-Xavier de Lestrade and producer Denis Poncet embedded with the Peterson family, the twists and turns in the story were so abundant they decided they needed more runway.

The case at the center of both the doc and Campos’s brilliant adaptation for HBO Max is focused on the peculiarities surrounding Kathleen Peterson’s death after an apparent fall down the staircase of her family home in Durham, North Carolina. Michael Peterson claimed Kathleen’s fatal plunge happened out of earshot (he was sipping wine by the pool) and after a night of drinking, planting the idea that Kathleen was drunk. Yet Kathleen’s scalp had seven deep lacerations, plus she had another 35 cuts and bruises on her body, all of which seemed to tell a very different story.

If The Staircase was just about the above facts, you’d have enough for a true crime mystery. But the story only begins there, and the bizarre revelations keep coming. Campos’s meticulously crafted series revisits all the twists from the documentary but widens the scope to include the filmmakers themselves, who bicker over Peterson’s potential guilt, and even our own bottomless fascination with the domestic horrors of other people’s lives.

We spoke to Campos about what drew him to adapt an already hit documentary series, how he worked with a supremely talented cast led by Colin Firth, as Michael Peterson, and Toni Collette as Kathleen, and how Enya’s music (yes, Enya) helped him find his way to the story.

What compelled you to take on The Staircase, especially given the fact the docu-series seemed to have explored the story of Michael and Kathleen Peterson so thoroughly?

I’m a big true crime fan. I was religiously reading these crime reporting books that were coming out every year, and I was always on the hunt for a story that I hadn’t heard. So when The Staircase DVDs came to me, I had the experience that’s become so common now but wasn’t then—I binged watch them. I was completely immersed. And I’d never had that experience before.

What gaps or new territory did you initially imagine your feature adaptation exploring?

The one thing I noticed at the end of the documentary series was I felt like, ‘Oh, wow, I’ve heard everything there is to hear about this guy’s life and all his secrets and I still feel like I don’t know him.’ And that mystery intrigued me. To have that kind of unknowable figure at the center of a true-crime story felt like a puzzle within a puzzle. The other aspect that immediately jumped into my head was there was a French film crew embedded in his house throughout this trial, and that was a really interesting dynamic. Here are two people filming the story who are wrestling with the same thing I’m wrestling with, and they can have the dialogue that I’m having in my head right now. I started seeing all the possibilities with it, and then I got to know the French filmmakers and I was like, wait, these guys are characters.

How did you marshall everything you’d learned about this story, which includes the 13 episodes of the doc and your relationship with the filmmakers, into a tightly plotted narrative?

The feature film version would have to follow one or two characters, but I was basically looking at this story from all angles. And so by the time that I got to the point where I realized it was a series, I’d already done a lot of work and felt like I was equipped to do it.

You move back and forth through time in a very subtle way, giving Toni Collette the space to really inhabit Kathleen. How did you solve that puzzle?

I knew there were going to be different timelines, but I wasn’t quite sure how I was going to jump from one to the other. I had a sense of the bigger narrative and I knew the end of the bigger story, but it just came to me that the way that it had to flow was that the audience had to almost not realize that they were jumping from one timeline to another, that it all had to feel like one story. But it took a long time, and a lot of listening to Enya, to crack the pilot.

Once you wrote the pilot and sold it, you established your writer’s room—how did you break down the series in the room?

Putting the writer’s room together was so important. I got to take all this stuff that I had accumulated and absorbed and spew it out and get all these other people as obsessed with this story as I was. That was a pivotal moment, sharing all my ideas and then mapping them out. We really had to sit and map out each character in each timeline, and then look at each episode and where we were starting, where we were ending, and then figure out how we’re going to tell that part of the story in that episode. Being in the writer’s room with all these other minds that were as obsessed with the story as I was allowed us to map out this really complicated puzzle.

How long would you say the writing process was until you could start to see your path from beginning to end?

It probably was like a year of working in the writer’s room. And then once the writers’ room was over, it was really me and Maggie [Cohn, writer/executive producer/co-showrunner], and she’s such a brilliant storyteller. She comes from TV, so she’s so used to the sort of long format, whereas I’m so used to movies.

You have such an incredible cast, not just Colin Firth and Toni Collette, but Parker Posey, Michael Stuhlbarg, Olivia DeJonge, and Rosemarie DeWitt. It’s a long list. How did you approach your work with them?

As a director, you want to focus moment by moment with actors, but at the same time in a TV show this big, you’re always considering the implication of every moment to the bigger picture. A lot of the actors already loved the documentary, so the bar was pretty high. They had their character’s voices in their heads already, and so much of why people love the doc is not just the story, but the characters, the personalities. So, when they read the scripts, they got a sense right away that we were up to something and that there was bigger stuff than just kind of trying to retell a story that had already been told.

Did you give them any notes on how close they should stick to their real-life counterparts?

The main direction was for them to take whatever aspects of the real person that spoke to them, see where you meet that person, but feel free to add to the mix. That’s how we’ll find your version of that person. It was very important that everyone knew we weren’t trying to do impersonations. And I think they’ve done such a good job that they feel like they are that person. I don’t think Colin really looks like Michael Peterson, but I think he’s captured the essence of Michael Peterson, or at least the essence that we all took from the documentary.

The performances are really astonishing. What have you learned through this long but I imagine very rewarding process?

The thing that I’ve learned over the years about directing is that people don’t necessarily like to be told what to do. People want ownership over what they’re doing. They don’t want to feel like they’re just colors that you’re painting with. And at this level, they’re insanely intelligent. They’re so good at what they do. They’re so perceptive and they’re such good storytellers themselves that it’s stupid to not take advantage of that. See where your actors are going, plant some ideas in their head through the script, and, a lot of times, an actor will say, ‘This idea came to me, and I don’t know where it came from.’ Well, it’s actually in the second paragraph of the first page there, but it’s not about where the idea comes from, it’s about getting to a place that feels exciting and interesting. I’m just excited about working with really talented people and giving them the room to play. If you just let them play, where do they go?

The Staircase episode 7 airs on June 7 on HBO Max.