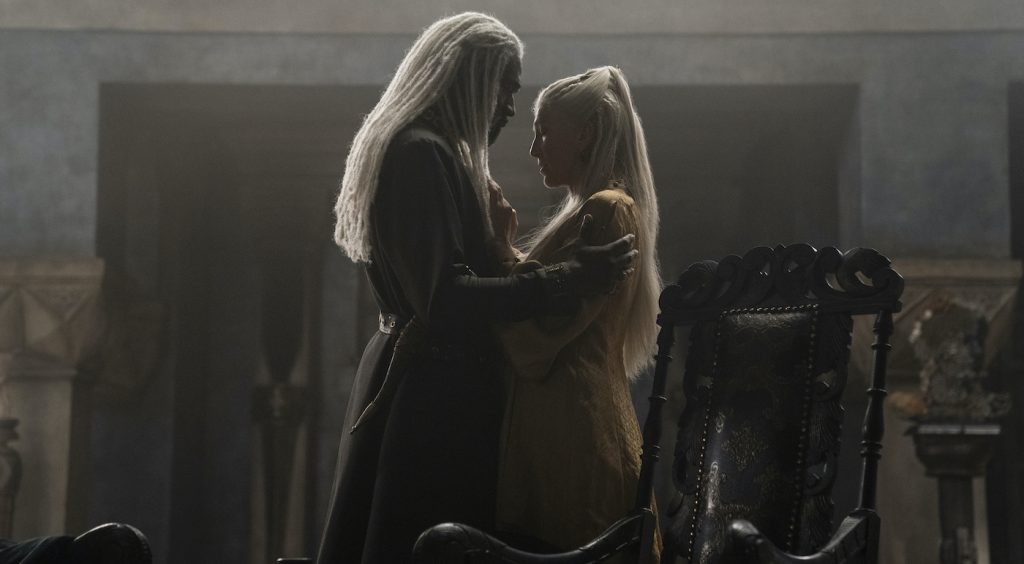 “Men would sooner put the realm to the torch than see a woman ascend the Iron Throne.” This piece of brutal real talk is delivered to Princess Rhaenyra Targaryen (Milly Alcock as a child, Emma Darcy as an adult) in the official teaser trailer for House of the Dragon, the first Game of Thrones prequel to make it through the development gauntlet and appear on HBO. For Game of Thrones fans, we know that, eventually, a woman will ascend to the Iron Throne, but the price she’ll pay, as well as that of the entire realm, will be brutal.

Based on George R. R. Martin’s “Fire & Blood” series, House of the Dragon is set 200 years before the likes of Daenerys Targaryen, Jon Snow, Cersei Lannister, and the rest fought and died over the Throne in Game of Thrones. The series will explore the rise of Daenerys’ ancestors in the House Targaryen and will track how these volatile, often vicious dragonlords came to rule over Westeros, and the civil war that followed known as the ‘Dance of Dragons.’ The series comes from co-creators Ryan J. Condal and George R. R. Martin. Condal serves as co-showrunner along with Game of Thrones alum Miguel Sapochnik, who is also the director of the pilot and other episodes.

The teaser offers fresh glimpses at the palace intrigue, and one excellent final shot of Prince Daemon Targaryen (Matt Smith) confronting one of his family’s dragons. Although House Targaryen is known for being able to harness and ride those majestic beasts, dragons are never fully tamed. Neither are the rest of the Houses in Westeros, which is why one of the most dangerous things a House can do is claim to rule them from the Iron Throne.

Check out the official trailer below. House of the Dragon premieres on HBO and HBO Max on August 21.