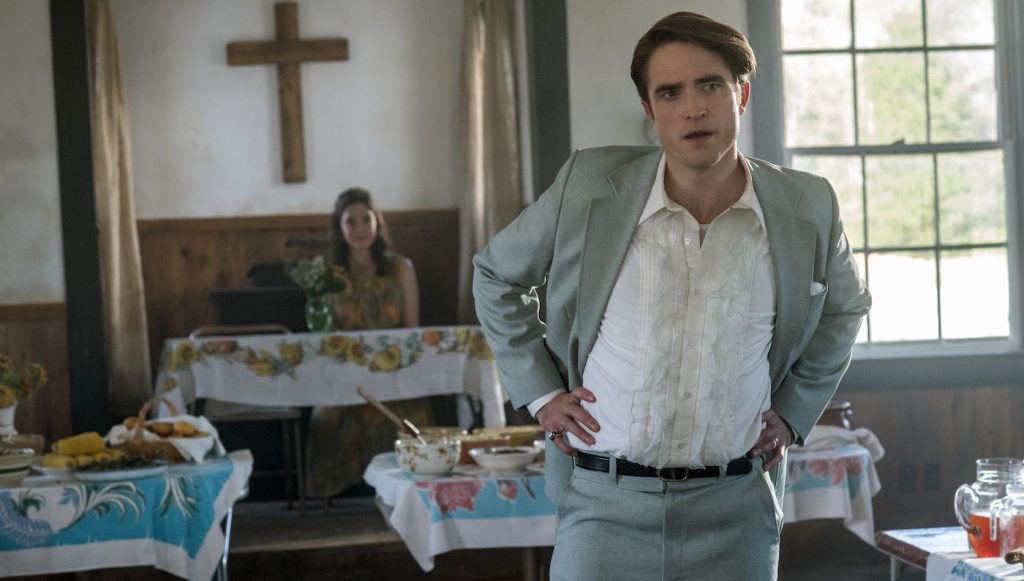 Complicated characters are director/writer/producer Antonio Campos’ forte. There was the desensitized, internet-addicted prep-school student in his feature-length debut, Afterschool; the shockingly tragic television reporter in Christine; and the inexplicably violent young mother in the first season of The Sinner (Campos directed the pilot and served as that season’s executive producer).

Now, in his latest project, The Devil All the Time — streaming on Netflix starting Sept. 16 — Campos delves into a host of disturbing characters, exposing all their knots and thorns. The film, based on the award-winning novel by Donald Ray Pollock, centers on a religious backwoods community where the devout inhabitants take their faith to twisted, corrupt, and harrowing extremes. Onboard for the Appalachian gothic tale is an all-star cast: Tom Holland, Robert Pattinson, Jason Clarke, Sebastian Stan, Riley Keough, Bill Skarsgard, Mia Wasikowska, Haley Bennett, and Eliza Scanlen.

Campos chatted with The Credits about adapting the screenplay with his brother, shooting in northern Alabama, and choosing the perfect person to narrate the film. The following interview has been edited for length and clarity.

This is your first feature as a director since Christine in 2016. Why this film and how did it come your way?

I was given a book by Randy Poster, who’s best known as a music supervisor. He’s a producer on this. He wanted to make it and I really felt it was something I wanted to do with my brother, and so I brought my brother on to co-write with me. It was a project that we were just kind of obsessed with. We really wanted to see this book on the screen, and it was such a strange, dark journey, but at the same time, one that we found really entertaining and engaging that we thought would be a really amazing movie.

I read there was a lot you had to leave out of the film. What challenges did this pose in writing the script, and how did you work with your brother, Paolo?

Like any book, there’s always gonna be more in it and you just have more time to spend in that world. The thing that we were really focused on was trying to capture the essence of every storyline and character. You know, a lot of stuff happens to this character, but what is the story really about, what is the key in and out of the story, and what purpose are they serving the bigger narrative. And so we had to be ruthless with the stuff in the book that we really loved but just didn’t work in a film.

My brother had never written a script before. He’s written prose, he’s written short stories, he’s written a book that hasn’t been published. So he didn’t know the format of a script, but I said, ‘well, that doesn’t matter, just work on it and figure out all the format stuff later, just write what feels correct,’ and he did and it was a very organic, natural process to write a screenplay. And the thing that my brother is so brilliant at is language. He finds very inventive ways to express something simple in a kind of profound way.

Are you referring to the dialogue?

It’s not like one person did one thing and the other person did another thing. We were both working on the script in all different capacities, all aspects of it. But one of the things that my brother I think does particularly well is have an ear for dialogue.

Donald Ray Pollack, the writer of the novel the movie is based on, serves as the narrator, which is an interesting turn. How did this come about?

I just asked him. The only voice in my head for this narrator was Don Pollack. I was so nervous that he was gonna say no, and I waited and waited and waited and then I finally got the courage to ask him and he said yes right away. And he said, ‘if you don’t think I’m doing a good job, you can totally tell me and I won’t be offended,’ and I reassured him that there’s no way that he could do a bad job. He was just very generous with his time. He recorded all the scripted narration before we started shooting, so we had all of that to work with as we assembled the movie as it was shot. And then we were writing more and more narration, and then I would send him the lines and then he would send me a few takes of it and then he would sometimes do an alt version. It was just a really collaborative and fun process.

You shot over 35 days in northern Alabama, although the movie is set in Ohio and West Virginia. Why Alabama? Were there incentives?

There were incentives to Ohio, too. We had planned to shoot in Ohio. The problem was that we had to move our schedule up because of an actor’s availability, so we needed warm weather and at the end of winter we had to move further south. Northern Alabama looked the closest to southern Ohio and West Virginia. It’s coal-mining country. Appalachia touches it. And there are a lot of churches and a lot of old farmhouses and things like that that worked for the kind of locations we were looking for.

Jake Gyllenhaal is a producer of this film. How was that collaboration?

It was very nice. Randy and I went to Nine Stories, which is Riva Marker and Jake Gyllenhaal’s production company, and I had a relationship with Riva Marker. And so we partnered with them and started to talk about the script and notes and how to figure out a budget and go to market with it. I remember spending a lot of time with Jake at that point and talking through my vision for the script. And then Riva Marker was on set every day. Jake was just very supportive from afar and then in post, he shared his thoughts.

The story at its center is about a religious community that takes its faith to horrific extremes. I’ve spoken with several filmmakers during this period of COVID-19, civil unrest and national polarization, whose projects have wound up being timely and relevant. The same can be said for The Devil All the Time in its extremism. What is your feeling about this?

I think that there’s an aspect of the film that touches on this thing that’s somehow embedded in this country, which is its unhealthy relationship with violence and faith, and there’s a strange intersection of those two things in the U.S. I think that the conversations that are happening are ones that are very productive and should have happened a long time ago. You know the book was written in 2011, the script was written over the course of 2015, ’16, ’17, and then we started making the movie in 2018, ’19. It wasn’t written about 2020, but I can see how in some ways it speaks to some things going on now.

Looking at your past credits, I was struck by the darkness of the stories and then I came across this quote from you about how dark characters are interesting to explore and it’s fun to make these types of movies. Where does this aesthetic come from?

I like the challenge of portraying complicated people. I don’t think these are dark characters, I think these are complicated people. I’m always drawn to character. I think that at an early age I was exposed to very challenging, interesting movies, and I have always been excited to make films where you’re getting into weird territory at times and you’re going down dark roads, always in the hope that you come out at the other end with a little bit of light. I feel like the end of the film is hopeful in a way. I can’t tell you where exactly the origin of going after these stories is, but I know that for me it’s the challenge of being compelled to try and explore complicated characters.

TAGSDirector Interviews Netflix The Devil All The Time