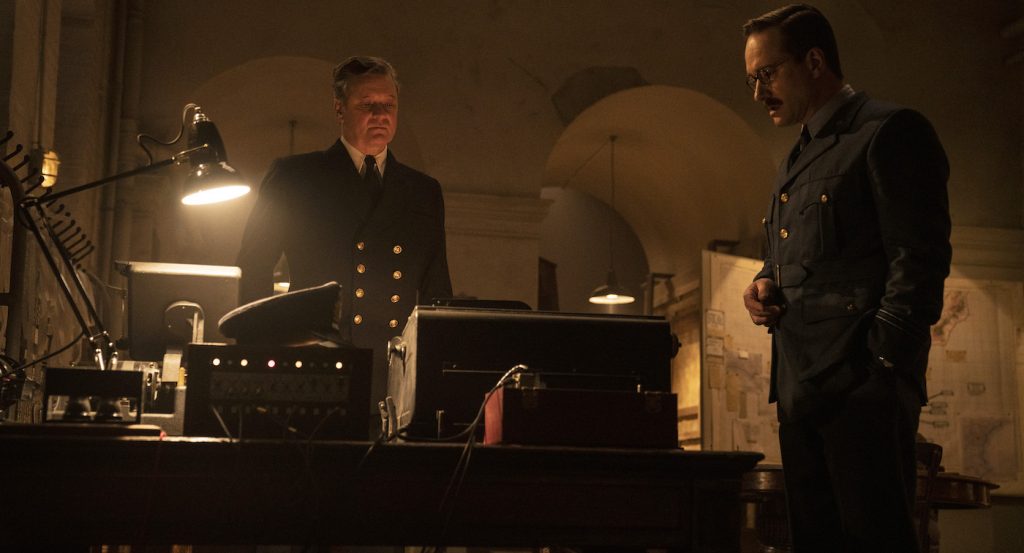 Writer Ben Macintyre’s book “Operation Mincemeat: How a Dead Man and a Bizarre Plan Fooled the Nazis and Assured an Allied Victory” lives up to its subtitle. The bizarre plan in question would barely be credible as the plot of a movie, let alone an actual piece of espionage history that really and truly did fool the Nazis and make an Allied victory possible. A sketch of that plan—doctor up a corpse to make it look like a high ranking British officer, fill in his backstory (photo of his sweetheart, proper credentials, etc.), and include detailed plans about a British attack on Nazi positions in Europe via Greece, and hope, against all odds, the Nazis fall for it and divert their resources from Sicily, the actual location of the Allied invasion. The number of things that had to go right for this ploy to work was astonishing, and as even a D-student of history knows, the Allied forces won the war, so the ploy, incredibly, worked.

You couldn’t read Macintyre’s book without telling yourself this should be a movie, especially when you learn that one of the scheme’s architects was a young Lieutenant Commander named Ian Fleming. (Yes, that Ian Fleming). And twelve years after its publication, director John Madden has delivered a riveting adaptation of a story with more moving parts than an amphibious assault.

Considered the greatest single deception in the history of espionage, the events surrounding Operation Mincemeat have been parlayed into a film before, director Ronald Neame’s The Man Who Never Was (1956), yet it’s fair to say Madden’s Operation Mincemeat, premiering today on Netflix, will likely be the definitive cinematic version. Working off a nimble script from Michelle Ashford, Madden has marshaled a stellar cast of performers, including Colin Firth as the operation’s chief Ewen Montagu (who went on a to write a history of the operation in 1953 that was the basis for the 1956 film), Matthew Macfadyen as his brilliant number two Charles Cholmondeley, Johnny Flynn as Ian Fleming, Kelly Macdonald as a crucial member of their team, Jean Leslie, and Jason Isaacs as the operation’s official Doubting Thomas, Admiral John Godfrey.

We spoke to Madden about the risks and rewards of adapting Macintyre’s book, and why Operation Mincemeat had to be more than just a spy thriller.

How did you first come to Ben Macintyre’s book?

I was aware of the story, you know, in a kind of urban myth way. When I was growing up we had the original account of it from Ewen Montague’s book, “The Man Who Never Was,” which became a film in 1956. I was too young to see that, but I remembered a dim sense of the story and what it was about simply because once you hear about the dead body, it sticks in your head. Then I was working with Michelle Ashford on a pilot for a series about the sex researchers, Masters and Johnson, and she had just stumbled on Ben Macintyre’s book. She was just sort of gobsmacked by it. She gave it to me and said she thought she had a hunch about a way into this book as a film.

The story Macintyre tells is just so unbelievable, and it does feel like begs to be a movie, but then again, it’s incredibly complex. How did you turn this massive, intricately plotted deception into a cohesive, compelling film?

When I read it, I thought, ‘How on earth do you corral this extraordinary story into a shape that has the specific gravity of a film?’ There were several things that Michelle and I both jumped at. One was the sort of thematic idea that it’s a story about telling stories. It’s about fiction and reality and how you mediate reality by telling stories about it. Then, it happened to be peopled with novelistically inclined characters left, right, and center, with the most extraordinary one in the middle of it, Ian Fleming, who was 10 years away from writing “Casino Royale” at the time. But much more than that, I was amazed at how you were grabbed emotionally by this story.

It seems rare for a spy thriller to be so concerned with the emotional landscape of its central characters.

The circumstances here were interesting—the people who actually created the deception were not professional spies. They were highly intelligent people who gravitated towards the intelligence effort during the war. Many of them were very eccentric, like Charles Cholmondeley (Macfayden), and they were plunged into this improbable undertaking, which I think initially they sort of jumped at because it seemed like an idea that worked in fiction.

Yes, that’s another incredible true fact—they lifted their idea of planting a corpse with fake papers from a novel!

It was all borrowed from the book “The Milliner’s Hat Mystery” by Basil Thompson. And then they started to take very seriously the idea that could this be made to work. They invested more of themselves in it until eventually, they became lost.

We watch as Firth’s Ewen Montagu and Macfayden’s Charles Cholmondeley, the chief drivers of the deception, start to unravel. How did you go about framing that?

They disappeared into their own fiction to a degree emotionally, and that was the point of entry for Michelle and me. I didn’t think you could tell the story unless you could involve the audience emotionally, because if it just became like a sort of parade of Monte Python sketches, that might not result in something that gave you a film that evolved into something much more powerful in the end, because it’s a big story with huge stakes.

The stakes are hundreds of thousands of human lives and the fate of the free world, more or less.

Yes, and I think at the point that those stakes really finally settle on the shoulders of the creators of this fiction, it becomes almost unbearable because of the risk that their deception could have the exact opposite effect that they wanted.

It’s a spy thriller, but also a war film, and then it’s also got hints of a romantic triangle—how did you meld those genres?

Emotionally it’s tonally varied. I love those kinds of films that you have to kind of navigate shifts in tone that are sometimes very funny and absurd. Then it becomes something else and the characters don’t realize what’s happening to them. I feel this is true of any film, particularly a film like this, that if it’s just a dry procedural, even one this crazy and bizarre, it will only keep you engaged at a certain level. On one level it’s a war film, the world of bombs and bullets on the battlefield and the brutalities and the heroism, and on the other hand, it’s about the corridors of power. But our film occupies a very unique space in the middle because the plan itself becomes shaped by the people who are creating it, who then become unable to control what it is that they’ve created. The whole thing depends on a body that you float across a piece of water.

This is where Operation Mincemeat turns again—it’s hard enough to launch this mission, and then when it is launched, it’s a terrifying waiting game of, ‘will it work?’

Yes, how do you deal with the third act? Because you know, two acts are certainly going to be the time you need to develop the deception and making that real. And then the body is launched and now the story has to go somewhere else because the characters that we’ve been following are completely separated from the story that unfolds.

So how’d you solve that third act problem?

Michelle and I were talking and we thought, at that point, it should flip on its head. The story then becomes about how our characters are assaulted by doubt, how dread takes over, and with very good reason because they can’t actually tell whether the body has hit the target that they want. And when the body does land in Spain as intended, it becomes about who’s bluffing and who’s double bluffing? Have the Germans swallowed the deception, or, have they figured it out and are now playing a disinformation strategy back at the Allies? And then the film becomes existential almost and moves into the terrain of a thriller, with the terror of this situation where countless hundreds of thousands of people might be literally marching into their deaths.

It’s amazing that once the body lands in Spain, we meet the British officers stationed there who have to continue to sell the fiction to the authorities there, both Spanish and Nazis because this feels like it could be its own movie. These characters are also so compelling.

Yes, by the time the body is actually in Cadiz, it’s so fascinating. And every new character could be the protagonist of a movie. It’s very unusual story in that respect, the fact that every character who walks into the movie sort of holds the story in their hands at a certain point.

Operation Mincemeat is available to stream on Netflix.