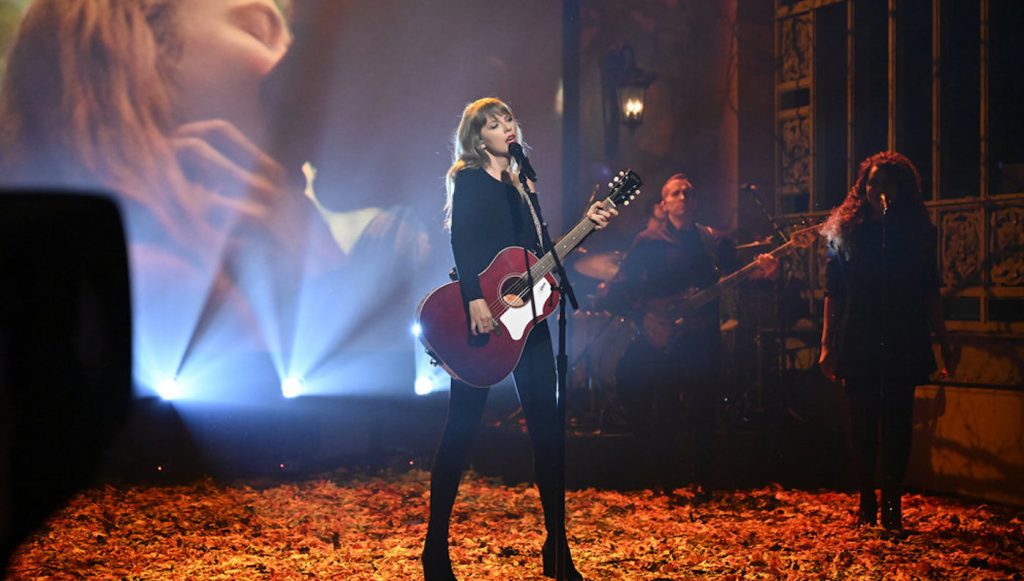 If you missed this weekend’s excellent Saturday Night Live, then you missed not only a bravura performance by host Jonathan Majors but also one of the most compelling live musical performances of the year. Taylor Swift delivered the 10-minute version of “All Too Well,” coming off the heels of her big album release for “Red (Taylor’s Version)” this past Friday, a re-recorded album—Swift had released the original “Red” in 2012. The song is about a breakup, and as Swift moved through the narrative musically, she also performed the stages of the doomed relationship as well. The song was so epic that it was the only one Swift sang during the show (usually, a musically guest plays two 3-4 minute songs). What’s more, this is the first television performance of the extended version of “All Too Well,” and, it accompanied a short film (also titled All Too Well) which Swift directed, which played on a big screen behind her. Like the song, Swift’s film All Too Well is centered on a promising romance that goes sour, with Sadie Sink (Stranger Things) and Dylan O’Brien (Maze Runner) starring.

Swift started out the song playing acoustic guitar, but that was discarded about halfway through as the relationship starts to buckle. Standing on a pile of leaves, Swift progresses from strumming on her acoustic guitar to some light headbanging in the middle, and, in the end, to swaying alongside her two backup singers as they sang an a cappella refrain from the “sacred prayer” outdo. It’s a mesmerizing ten minutes.

Check out the performance below.

And for a taste of the comedy portion of the program, check out Majors in this skit, “March of the Suitors.”

And finally, to stream the full show, check out Hulu here.

For more on NBC, Universal Pictures, and Focus Features projects, check out these stories: