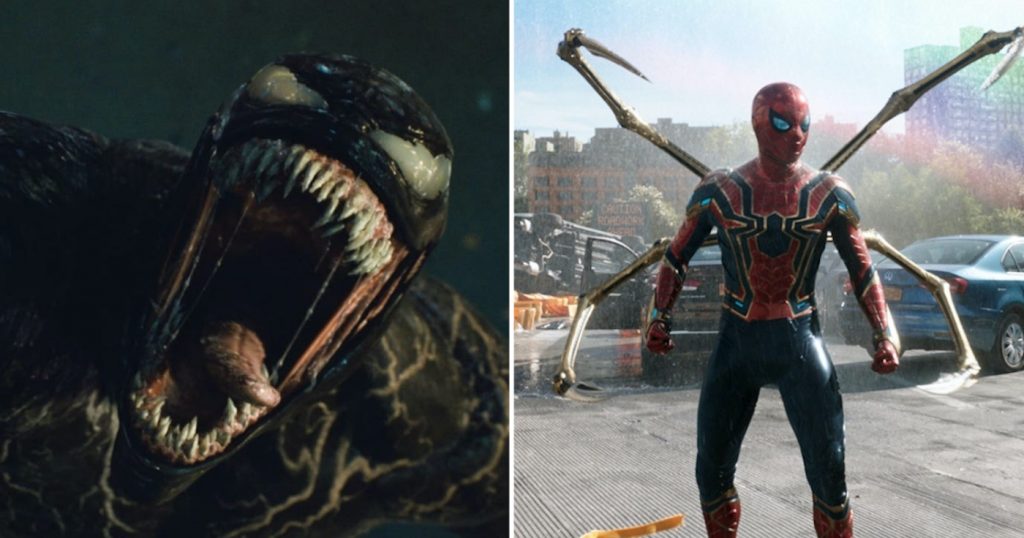 It was only last May when Sony Pictures announced that their shared universe of comic book properties would be known as the Sony Pictures Universe of Marvel Characters, but the acronym SPUMC didn’t quite have the same zing as MCU. But now, having officially jettisoned that name and rebranded with the much smoother Sony’s Spider-Man Universe, the studio has signaled that the near future will almost certainly give us the collision between Tom Holland’s Peter Parker and Tom Hardy’s Venom folks have been waiting for. And, it puts their most valuable character front-and-center, making it clear that the universe, or should we say the multiverse, revolves around Peter Parker.

Sony’s Spider-Man Universe sure got a big boost when the long-awaited trailer for Spider-Man: No Way Home revealed director Jon Watts’ upcoming film, which will find Peter Parker (Tom Holland) enlisting Doctor Strange (Benedict Cumberbatch)’s help, to disastrous effect. The trailer revealed that when Parker asks Doctor Strange to undo the damage caused by Mysterio (Jake Gyllenhall) in Spider-Man: Far From Home (Mysterio not only revealed Parker’s identity, he framed him for his murder), he ends up conjuring villains from the multiverse. This means that, for the first time ever, Sony’s three Spider-Man franchises will co-exist in the same film. Enter Willem Dafoe’s Green Goblin from the very first Spider-Man and Alfred Molina’s Doctor Octopus from Spider-Man 2, both starring Maguire and directed by Sam Raimi. Then throw in Jamie Foxx’s Electro from The Amazing Spider-Man 2 (starring Garfield), and voila—a single film contains a multiverse of Spider-Man villains and cements Sony’s Spider-Man Universe, simultaneously.

Yet before No Way Home bows on December 17, director Andy Serkis’s Venom: Let There Be Carnage hits theaters on October 15. The second outing for Tom Hardy’s titular antihero, Let There Be Carnage will feature Woody Harrelson as the lead villain, and looks to be a bit more self-contained than No Way Home, but will still inch us closer to the inevitable crossover between franchises. Then in 2022, Jared Leto stars in director Daniel Espinosa’s Morbius, which premieres on January 28 and will be the third film in the newly minted Spider-Man Universe, with Kraven the Hunter, from director J.C. Chandor and starring Aaron Taylor-Johnson in the title role, is due on January 13, 2023, as the fourth.

Tom Holland’s contract with both Sony and Marvel ends after No Way Home, and one imagines in the new contract, he’ll be moving between Sony’s Spider-Man Universe and the MCU for the foreseeable future. That gives Sony plenty of time to get him in a film with Venom, the two characters being nearly perfect foils for each other, and a chance for Spider-Man and Venom fans to see a matchup that was last attempted in Sam Raimi’s third and final film in the original trilogy, Spider-Man 3 in 2007.