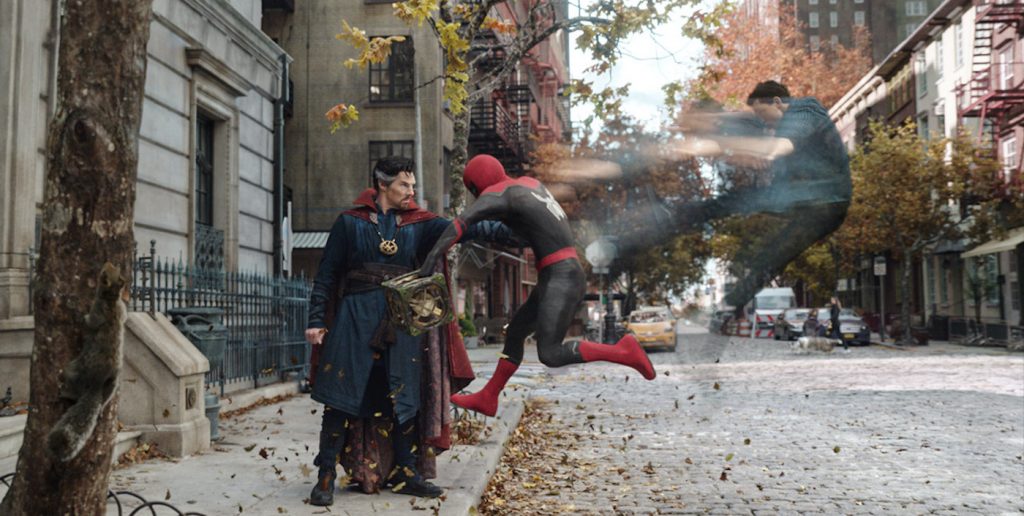 For the first time ever in a Spider-Man film, everyone’s favorite web-slinger is no longer working undercover. Sony Pictures has revealed the first trailer for director Jon Watts’ Spider-Man: No Way Home, revealing that the repercussions from Spidey’s exposure at the end of Spider-Man: Far From Home will have major implications in the new film. If you’re having trouble recalling what happened at the end of Far From Home, considering it feels like several millennia since its’ 2019 release, here’s a quick synopsis—Jake Gyllenhaal’s fame-hungry, power-mad Mysterio revealed Spidey’s identity and set Peter Parker up as a cold-blooded killer simultaneously. It was a massive one-two punch that, as mentioned, has now revealed Parker’s identity for the first time in Spidey film history.

The frame job Mysterio did on Peter Parker isn’t just hurting him. The trailer reveals how everyone in Peter’s world—Aunt May (Marisa Tomei), Ned (Jacob Batalon), and MJ (Zendaya) are now all under the harsh glare of Peter’s newfound scrutiny. New York City seems to be turning on him (you might notice someone in the crowd holding up a sign calling Peter the devil), and Peter needs to find a way out. Or, to use the parlance of the trilogy’s titles—a way home.

Enter Doctor Strange (Benedict Cumberbatch). Peter seeks out the good Doctor for guidance and help, a role that used to be filled by Tony Stark, but we all know Tony’s gone thanks to sacrificing himself to save the universe in Avengers: Endgame. Peter is wondering if Doctor Strange can make it so Mysterio never revealed his identity, and when the Sorcerer Supreme agrees, Spider-Man: No Way Home is launched into its multiverse madness, where Peter’s attempt to lead two lives ends up bringing back one of the best villains of any Spider-Man movie, Alfred Molina’s Doc Octopus, from Sam Raimi’s Spider-Man 2 when Tobey Maguire was Spidey. And he’s not the only villainous blast from the past—Jamie Foxx’s Electro, from The Amazing Spider-Man 2 (during Andrew Garfield’s run as Peter Parker) will also burst on the scene.

And there’s one more supervillain expected to emerge. You’ll notice a familiar laugh when the multiverse is unleashed, and a familiar weapon, the pumpkin bomb, roll across the street. Yup, that’s Willem Dafoe’s Green Goblin, the villain who started it all in Sam Raimi’s 2002 Spider-Man.

Check out the trailer below. Spider-Man: No Way Home swings into theaters on December 17.

Here’s the synopsis for Spider-Man: No Way Home: