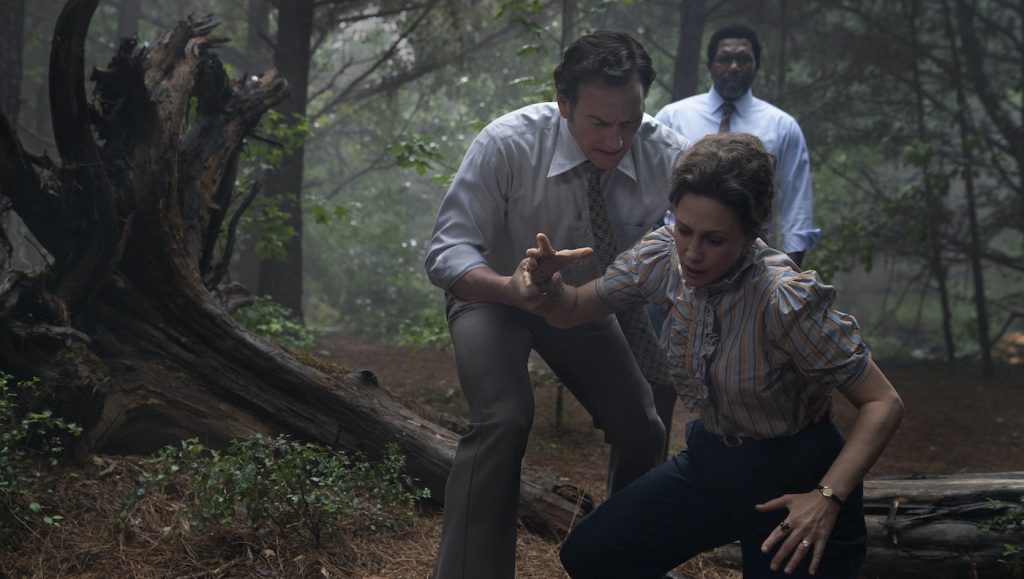 The Warrens are back in the final trailer for The Conjuring: The Devil Made Me Do It, and they’re once again up to their necks in the paranormal, only in a case unlike any they’ve taken on before. Ed and Lorraine Warren, played as ever by the terrific pairing of Patrick Wilson and Vera Farmiga, have now become members of a pantheon of horror movie heroes that includes such plucky survivors as Jamie Lee Curtis’s Laurie Strode (from the Halloween franchise) and Neve Campbell’s Sidney Prescott (from Scream and its sequels.) Yet unlike those two indomitable women, the Warrens go looking for trouble—as paranormal investigators, it’s what they do.

In The Devil Made Me Do It, the Warrens return in a peculiar case, even by their standards. Once again “based on a true story,” The Devil Made Me Do It eschews the haunted houses of past entrants and focuses, instead, on a grisly murder. In 1981, Arne Cheyenne Johnson (Ruairi O’Connor) is arrested for stabbing his landlord to death. At trial, his defense attorney claimed that Arne had been possessed by a demon. The Warrens eventually get involved in the case, of course, as this is their franchise, and the “demon made me do it” defense, the first of its kind in an American courtroom, would of course attract these notorious paranormal investigators.

Check out the final trailer below. The Conjuring: The Devil Made Me Do It hits theaters and HBO Max on June 4.

“The Conjuring: The Devil Made Me Do It” reveals a chilling story of terror, murder and unknown evil that shocked even experienced real-life paranormal investigators Ed and Lorraine Warren. One of the most sensational cases from their files, it starts with a fight for the soul of a young boy, then takes them beyond anything they’d ever seen before, to mark the first time in U.S. history that a murder suspect would claim demonic possession as a defense.

Vera Farmiga and Patrick Wilson return to star as Lorraine and Ed Warren, under the direction of Michael Chaves (“The Curse of La Llorona”). The film also stars Ruairi O’Connor (Starz’ “The Spanish Princess”), Sarah Catherine Hook (Hulu’s “Monsterland”) and Julian Hilliard (the series “Penny Dreadful: city of Angels” and “The Haunting of Hill House”).

TAGSThe Conjuring: The Devil Made Me Do It Warner Bros.