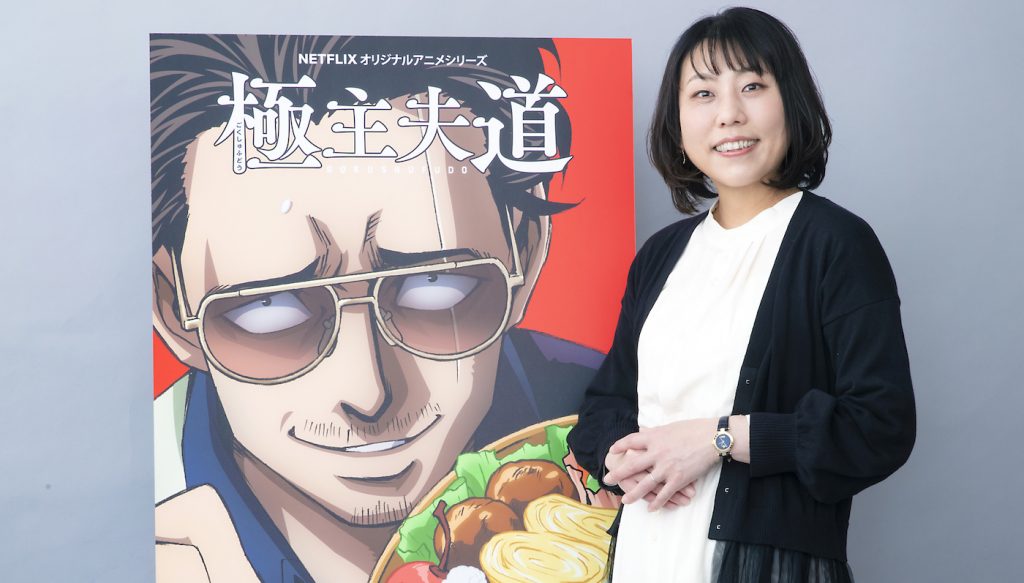 A new Japanese anime series The Way Of The Househusband will premiere on Netflix globally on April 8. The five-episode series follows Tatsu, once a legendary yakuza nicknamed The Immortal Dragon, who is determined to become a devoted stay-at-home husband, diligently handling all the daily chores for his wife Miku, a busy career woman. But his newfound domestic bliss is soon interrupted when friends and foes from the past come back into his lives.

The series is based on the popular gangster comedy, Gokushufudō, written and illustrated by Kousuke Oono, which first appeared on a webcomic site in 2018 and has since sold 3.3 million copies. Netflix began developing and adapting the original manga in April 2020 before it went into production in July.

Netflix operates a creative team in Japan for live-action and anime content in both films and series. Since 2015, it has produced several high-profile anime such as Seven Deadly Sins, A Whisker Away, Baki, and Blood of Zeus. The Tokyo-based anime team is led by Taiki Sakurai, who joined the company in 2017 to build the anime slate.

According to Netflix, over 100 million households around the world chose to watch at least one anime title on its streaming platform in the period October 2019 – September 2020, growing by 50% year-over-year. Anime titles also appeared in the top 10 list in almost 100 countries this year so far.

We spoke with The Way Of The Househusband director Chiaki Kon, who worked as a storyboard artist before making her directorial debut in 2006 with When They Cry – Higurashi. Since then, she has directed a number of animated films and TV series, including the Junjo Romantica series, Nodame Cantabile: Paris and Nodame Cantabile: Finale, Zakuro, The World’s Greatest First Love series, and more.

How did this opportunity to direct for Netflix come about?

There was a discussion between Netflix and J.C. Staff about producing an anime. After that, Mr. Yuji Matsukura, a producer from J.C. Staff who has been supportive of my career, talked to me about The Way Of The Househusband. I think it was because of Back Street Girls – Gokudols. I have worked with Mr. Matsukura several times before Gokudols. I think he believed The Househusband had a similar approach to Gokudols [about three yakuza underlings trained to become female J-Pop idols]. When offered the project, I accepted it without hesitation.

That a yakuza can become a househusband is sort of subversive. What do you find most refreshing about the story?

I didn’t fully grasp Tatsu’s character when I first read the manga. But as I began working on the series, I realized that Tatsu was somewhat a clown who was comical without knowing it himself. This allowed me to understand his character in my own way and move ahead with the project smoothly.

I particularly like “Limit of the Knees” in the manga [in which a yakuza trains to strengthen his knees before taking on Tatsu, but his knees got soft and he falls on the ground the moment he sees the latter]. I was so looking forward to animating it for the series while reading this from the manga.

The hugely popular manga has been adapted into a live-action drama series by Nippon TV. What was going through your mind when you created it as an anime?

My main target was to make an anime that was true to the manga, so I wasn’t very conscious of the live-action adaptation. There are many acrobatic movements in the manga and I knew they would be interesting when animated. I just felt that I wanted to make a fun series, but it wasn’t an easy series to work on.

Can you describe the dynamic of this project? How much artistic freedom did you have?

I work closely with the J.C. Staff production team. From the beginning, my producer made it clear that we should “make an anime similar to the experience of reading the manga.” I found this briefing challenging as it was a slightly different approach. Coming up with the right camera work was really difficult. I tried many options, even if it was just splitting up parts of the panels and using a sliding technique. There were a lot of challenges in this series that I had never encountered before.

Did you adopt a different style for the new project, compared to your previous animated films and TV series?

I have never thought about the differences in making movies or series, but I’ll think about them moving forward. When it comes to line effects and onomatopoeia, I always like manga-style visuals. We added text for the scene when Miku returns home and walks up the stairs. Usually, the sound of footsteps would be put in, but I thought it would be difficult to understand that she is going up without seeing that text. Adding text to the screen also makes for a more interesting visual experience and adding onomatopoeia like “bang” or “boom” was really important. It also helped give the episodes varying levels of intensity.

What is it like working in the Japanese animation industry? How did you work your way up to be an anime director?

There are more female directors now compared to the time when I first started, but we are still a smaller percentage. I used to be in production and was a member of animation studio Pierrot, but the director of an anime I was working on looked at a storyboard I wrote and said that it was good. He taught me the specifics of the production process and the basics of directing. He asked me to handle the direction of another work of his while he supervised me. That is why director Jun Kamiya is a mentor to me.

What were some of the highlights in your career?

The work that was a turning point for me was my directorial debut, When They Cry – Higurashi. Mr. Matsukura saw it and bought a DVD copy for sound director Jin Aketagawa, telling him that this was the look he wanted for Nodame Cantabile: Paris Chapter, which he wanted me to direct. But I think the two titles are completely different (laughs). At the time, I haven’t really worked with J.C. Staff and didn’t know Mr. Matsukura. His sudden request for me to direct such a major title came as a surprise.

TAGSDirector Interview Netflix The Way Of The Househusband