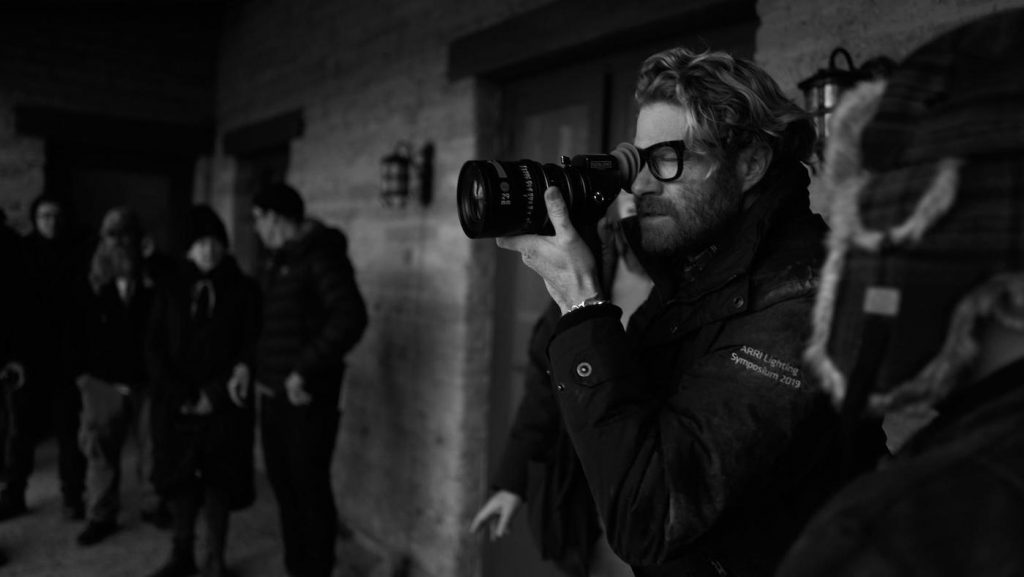 As mentioned in part I of our interview, director David Fincher and cinematographer Erik Messerschmidt didn’t want to spend the entirety of Mank trying to make it appear as if Citizen Kane DP Gregg Toland had shot it, “But there were things that we wanted to embrace holistically – like deep focus – where it made sense to do so,” the Messerschmidt explains. “It was never an ‘Oh, great, now we get to do Toland.’  It was more like, ‘Okay, what works thematically in Citizen Kane and why?’ And we could use it as a point of reference. Really, just shooting in black and white, period, ends up doing half the work, to a degree.”

There were even moments where he worried not only if they had gone too far, but not far enough. “I could just feel those questions coming, of people saying, ‘Oh, you had all this opportunity. Why didn’t you go really, really stylized?’ We only did things when it seemed right for the movie.”

Deep focus shots, such as in the big interiors of Hearst Castle (shot with an f8.0 aperture or even higher), or low angles were put to work in the ways they might have been used at the time. “Any kind of powerful characters, like Louis B. Mayer or Hearst, we definitely leaned into that kind of classic, archetypal style,” Messerschmidt says. Often they were shot from a low angle, to depict their towering personalities. “But we weren’t digging holes in the stage floor like Welles did.”

Messerschmidt’s main look was derived from lighting sets from the outside, lighting with a combination of old-fashioned big incandescent Fresnels and modern LED Softpanel lights. Sometimes, like in Mank’s ranch house, he tucked in some small tube lights or bars against a wall, hitting the ceiling, to give subtle hints of light. And there was plenty of smoke and atmosphere there. “We wanted it to feel dusty, like the Mojave Desert,” where it was located.

Messerschmidt would crank things up, a bit more stylistically, in places like Irving Thalberg’s or David O. Selznick’s offices, with dramatic shafts of strong light coming in Venetian blinds, leaving the main characters in deep shadow. “Some of the interiors, where the tone of the scene is a little bit more sinister or a little bit more dramatic, it felt appropriate,” though never overused to draw attention to itself. “We worked hard to consider that.”

Mank is told in flashbacks, just as Citizen Kane was, walking us through Mank’s career from his arrival in Hollywood in the early 30s leading to his present situation. While the chyron date-and-locations are used to a degree, the filmmakers chose to allow the flashbacks to be “the places where we could be more gestured and stylized, and modern-day moments were shot with more modern lighting techniques,” Messerschmidt explains. “The idea was to light all of those flashbacks with more contrast so that they would feel more period. More hard light, lower light and more contrast.” The modern-day scenes, by contrast, were often top-lit and soft-lit, from windows or lights on the floor, as would be seen more today.

One of the things they borrowed from Kane was using theatrical fadeouts to introduce flashbacks, saving hard cuts or dissolves to tell the audience they were returning to the present day. “That was a technique we could use to tell the audience they were stepping back in time with Mank. And once they’ve seen it once or twice, they would understand that’s what we were doing.”

The advantage of using true theatrical fadeouts as Welles did, actually putting the stage lights on old-fashioned plate dimmers, is control. “In a theatrical fadeout, we can control which parts of the frame go out before others, leaving something lingering slightly longer, say, an actor in the foreground,” Messerschmidt says. The DP went through the script and identified such moments, then discussed with gaffer Danny Gonzalez, and the two developed a plan, even building diagrams, based on how Fincher was blocking each scene.

And when a dissolve was used, they gave a “tip of the hat” to the old methods, purposely introducing film grain and gate weave, beyond what would be seen in the rest of the film, the same method introduced during the optical printing process required to build those dissolves in the old days. “We’re sort of ‘winking’ at the informed cinema audience,” he says, “the seven people in Hollywood that still know that!”

Messerschmidt wasn’t averse to applying more modern methods. “In modern cinema, we use focus to tell the audience where to look in the frame, and what part of the frame is important, or to isolate characters,” Messerschmidt says. “But in black and white, if you shoot very shallow depth of field, the backgrounds get kind of mushy, and you can’t use contrast and shape in the same way.”

So instead, he and his camera team utilized a device called a CineFade, a product that syncs the lens iris with a motorized polarizer, allowing him to dynamically affect the depth of field, without changing the exposure, so that the change isn’t noticeable. “There are moments—and they’re subtle—where the shot starts out with the entire room in focus, and then we rack the depth of field and collapse it so that just the foreground person or background person is sharp.” For example, when Mank’s wife leaves the bungalow near the end of the film, both she and Mank are in focus, but the shot ends with just Mank sharp in the foreground, with the rest of the room going soft.

Messerschmidt also used a modern swing/tilt lens system in a scene early in the film, when Welles comes to visit Mank in the hospital. “David wanted Tom Burke,” who skillfully portrays Welles, “to lean into focus. That wasn’t a thing we could chase. So we set the lens, and shifted the focal plane of the lens, so that just his eye would be sharp, right at that moment. And that’s pretty cool when it works.”

But it was good old-school filming techniques that helped Messerschmidt capture the experience Fincher wanted in one important sequence. Mank and Hearst’s mistress, actress Marion Davies (Amanda Seyfried) step outside of the castle and walk/chat amongst the grounds at night. While a typical setup would have had large lighting rigs lighting set up throughout the whole facility at the Huntington Library and Gardens in San Marino, the team found that the location was quite limiting, in terms of bringing in such heavy equipment.

Messerschmidt had been working in South Africa on Ridley Scott’s Raised by Wolves, where a good many scenes were shot using the old day-for-night method, often used in Hollywood’s heyday. Nighttime scenes were filmed during the day, but with the aperture closed down, dimming the exposure, to give the appearance that the scene is taking place at night. And doing so allows everything in the frame to appear to be lit, whereas using lighting instruments, placed in specific places, would still leave the background dark. Fincher wished to include the beautiful environment in all of the shots to display the world in which the characters found themselves. “They would have shot this sequence day-for-night in 1940, or else against a rear projection, and we didn’t want to get into that,” Fincher says.

One of the biggest challenges, though, was something Messerschmidt learned on Raised by Wolves—shooting that way requires a large amount of fill light on the actors, “because if you underexpose the image, you still need to feel their faces,” the DP explains. “Sunlight is already incredibly contrasty. So if you underexpose the highlights, people’s faces can be five stops under, easily.” Adding those lights, as they found in tests, caused the two actors to struggle to see, often squinting, because of the amount of light required to add to their faces.  So special contact lenses, using a sunglass tint, were made for them, allowing them to work naturally, even with strong light shining in their faces.

Whether utilizing modern techniques or replicating historic ones, the result is the same—the audience finds themselves in Mank’s world and Mank’s time, be it the early 30s or early 40s. “I think we just came to the conclusion that there were going to be elements of this movie that were modern, and that was unavoidable,” Messerschmidt says. “And, to some degree, it’s okay, because we’re telling a historical story, referencing historical cinema, but we’re using modern techniques. How far do you go? I think we hit the right balance.”

Mank is currently streaming on Netflix.