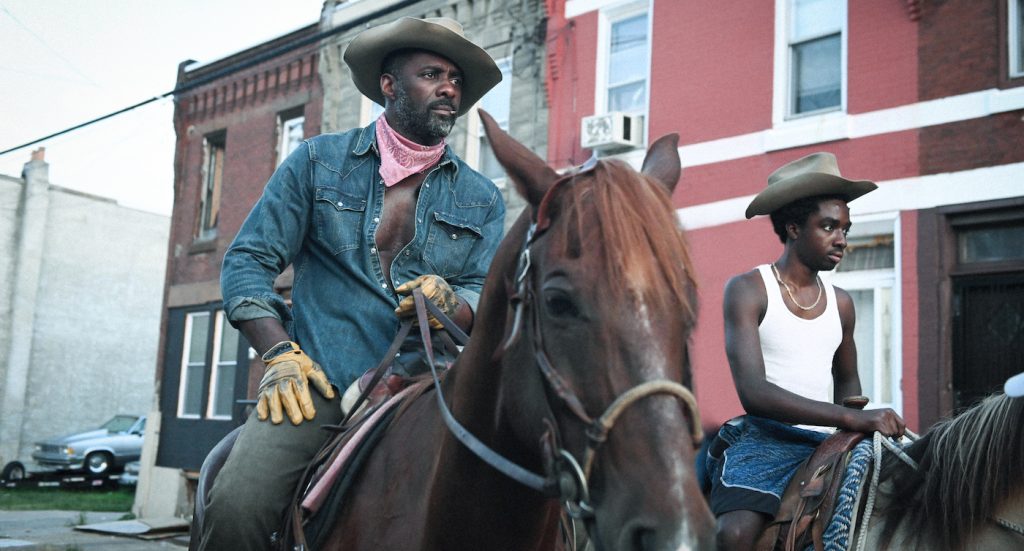 Westerns have a long and prominent role in cinematic history. The genre tends to conjure images of white hat vigilantes wrangling wild stallions in wide-open plains, but Concrete Cowboy (premiering April 2 on Netflix) starring Idris Elba will challenge all of your preconceived notions. The real-life men who inspire the film ride horseback at the Fletcher Street Stables through the middle of inner-city Philadelphia.

Writer/director Ricky Staub took note of the unusual riders years ago. He established Neighborhood Film Co. in 2011 with the mission to hire adults returning home from incarceration. The program led Staub to Eric Miller. “I speak every year in court and Eric had been on parole for about a week and was talking before the judge and said he had already bought a horse, which I found quite fascinating,” Staub recalled. “He was the first one that really shed light on the community of Black cowboys in Philadelphia at large, but then how Fletcher Street was facing gentrification issues and felt like if we could find a way to tell their story, it would raise attention to everything that they had going on down there.”

Local horsemen have been raising the animals in the city for a century, building a strong community and passing the tradition on to at-risk youth. Four years before Concrete Cowboy could ride onto the screen, Staub began doing some serious hands-on research. Miller and fellow cowboy Jamil Prattis, who appears in the film as Paris, shared their experiences in over ten hours of recorded conversations and initiated Staub into the lifestyle. “Eric and Mils said that in order to stay hanging out down there, I had to get up on a horse right away,” Staub recalled. “I rode a horse the first time ever in my life with them and not in a field. It was literally in the middle of the street. If this horse throws me off, I’m going to hit a car. But there was no way I was backing down. I had to prove that I could hang.”

The film touches on the whitewashing of Black cowboy history in the media. Part of the conversations Staub shared with Miller and Prattis focused on recapturing that narrative and reflecting the lifestyle from a Black perspective. “One of the things they told me that they wanted from the very beginning was that when they were younger, they didn’t have a western they felt like represented them,” Staub explained. “You know, they love cowboys, but there were never any Black westerns.”

Rather than rolling fields and sun-soaked days, Concrete Cowboy explores shrinking real estate and bleak times that threaten the stables and the lives of those who love them. The film’s production team still tried to pay homage to traditional westerns with a twist. “We tried to pick and choose when we merge it, but most of life in this story happens at night so you know that was unique to our western. But anytime we are during the day, we try to really capitalize on certain western tropes that you would see in those wide-open spaces or what it’s like when someone walks into a saloon. One of the party scenes – a lot of those shots were mimicked off of that coming through the doors and the bad guys sitting at the back playing cards.”

The Fletcher Street Stables can be cramped in its urban setting and creates incredible visuals in the movie. Filmed on location in Philadelphia, Staub was challenged with bringing the true stomping grounds of the stables to the screen. “For me, anytime someone says no one has shot there or you can’t shoot there, I immediately want to shoot there. It’s wonderful to be able to make something that no one’s ever seen. Especially the actual stables and community there, and just to be the first. Hopefully, there are other stories that come out of this community and Black cowboy movies.”

Staub initially envisioned the entire film being acted by the real people who lived it. Even after Hollywood stars including Idris Elba, Caleb McLaughlin, Lorraine Toussaint, and Method Man began filling the call sheet, community members still outnumbered them. “At the beginning, we didn’t know that Idris Elba would be interested or that it would scale to that size, so ten of the main leads in the film are real community members. I think 11 of our 14 stunt people were real community members. All the extras are real people there. I mean in some ways, the Hollywood A-list actors were in the minority in the film. They’re the smallest portion of it. So, in a lot of ways, I feel like we were able to retain a lot of the heart of how we wanted to make it.”

Staub laughed while admitting he wasn’t insistent it stay entirely local. “But no one says ‘no’ to Idris Elba when he wants to be in your movie, so we’re all pretty excited about that.”

Staub fondly reflects that there were no lines drawn between the locals and out-of-town actors. Some had more time than others to immerse themselves and learn from the community, but they all came to set with humility and professionalism. “This was truly a passion project at every level so their availability and what we could afford in terms of their time, but the second they landed I think it was really beautiful to watch Idris. Someone of his caliber as a movie star walking down the block and just sit down and it’s like, ‘I’m here I’m in let’s go.’ I’m almost convinced we didn’t need trailers because they just hung out with the community the whole shoot.”

Stranger Things star Caleb McLaughlin delivers the film’s standout performance. Rather than fighting outlaws, the cowboys of Fletcher Street work to prevent local youth from having their own run-ins with the law. The program teaches discipline and creates a safe haven for horses and riders alike. McLaughlin plays a troubled teen sent to live with and learn from his father, Harp (Elba). His performance is emotional and intensely committed. Staub insists that McLaughlin truly earned his spot. “From the beginning, I was like if they’re not willing to read or put themselves on tape, then they can’t have [the role]. I don’t care if they’re as famous as Caleb or a kid from Philly. Whoever is best for the role is going to get it. Caleb actually self-taped very early on without a question, which I gave him a lot of credit for because he does not need to self-tape. His audition genuinely became the one that I compared all other on auditions to.”

Concrete Cowboy stemmed from Staub’s own experience with the Fletcher Street Stables but was also inspired by Greg Neri’s young adult novel, Ghetto Cowboy. The original text was revised to create a more realistic glimpse into their lives. “His book is mostly geared towards middle schoolers and our desire was to work with the real Cowboys to bring it into a space that would have language that was more realistic to the world that these characters lived in. As someone who’s a writer as well, I’m sure it’s very precious to hand it over to someone else. It’s not an easy thing to do in the slightest. Definitely continually grateful that he’s a trusted us with it.”

Eric Miller was tragically killed a week before shooting prep began. The film’s legacy truly honors his contributions to the community and the impact he made on all the Fletcher Street cowboys. Staub says it all comes back to their connection. “It was really the relationship with Eric and Mil. I love anytime that there can be an additional component behind the work. I get the experience every day with our production company hiring adults returning home from incarceration. It just makes all the work we do life-changing, to use a cheesy term. I like that about it as my first movie.”