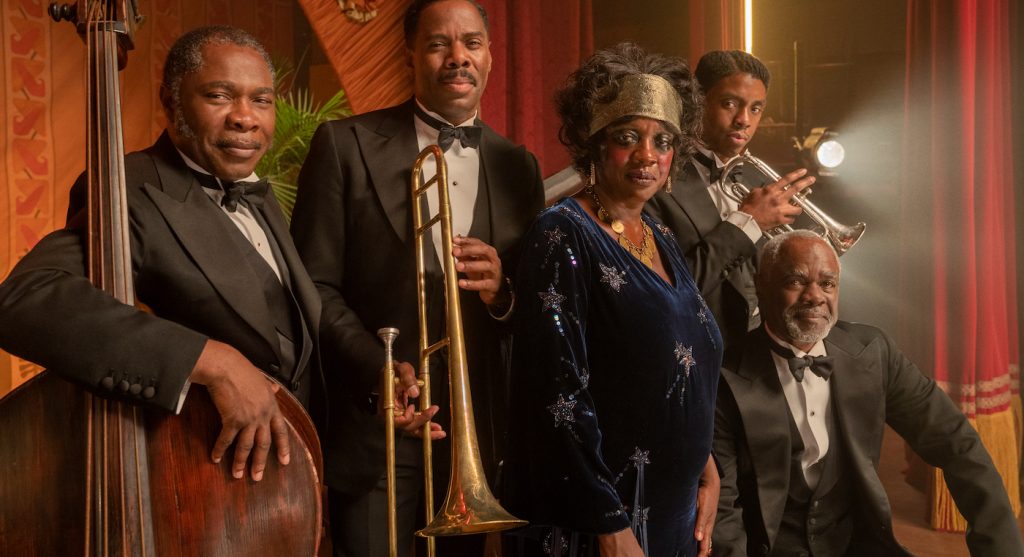 Makeup department head Matiki Anoff had her work cut out for her with Ma Rainey’s Black Bottom. Director George C. Wolfe’s adaptation of August Wilson’s play revolves around Viola Davis’s hard-charging blues singer Ma, and the tensions that boil over between her and her ambitious horn player Levee (the late Chadwick Boseman), as well as the white management running their recording session.

Like her colleagues, makeup artist Sergio Lopez-Rivera and hair department head Mia Neal, Anoff’s challenge was to help tell the story of the lives of these characters through the way they presented themselves with the limited means and access to makeup they had at the time.

We spoke to Anoff about accurately mimicking sweat, the beauty of cinematographer Tobias Schliessler’s lighting, and using modern products to capture the makeup of the past—which included crushed berries and cocoa powder—to create the mesmerizing story of a single recording session on a hot July day in 1927 Chicago.

There are some photos of Ma Rainey available, but I’m curious how you approached creating the look for the rest of the cast?

With Ma Rainey, there were so few photographs of her when we did our research, but Sergio Lopez-Rivera brilliantly brought her to life using what they had and using his own artistic touch. The rest of the cast was fictitious, so we had to create a backstory for them with what we read in the script.

Walk me through that process.

With Dussie Mae (Taylour Paige), I took direction from Ann Roth’s costume design. Her dress was faded and worn, and through discussions with George C. Wolfe and Ann, we decided that she was a southern girl who was a little bit lighter in complexion, so she attracted this Blues powerhouse [Ma]. But she was far from sophisticated, and I approached the makeup from that standpoint.

With the rest of the characters, I just looked at photos from the era. With the sophisticated Black ladies from the hotel, everybody was trying to replicate the screen goddesses of the era. So everyone pretty much wanted to look like an actress. For these higher-class light-skinned Black people, we created a more sophisticated makeup look that resembled the Caucasian people who were in magazines at the time. However, for the rural people, we didn’t have any makeup on them at all.

What were some of the specific challenges for you here? For example, how much does the weather (in this case, you shot mid-summer in Pittsburgh) affect your work?

I did a film previously in the summer in Pittsburgh, which was Fences, and it was a challenge to keep the actors dry. In this case, the Pittsburgh summer heat actually aided us. Even though the play takes place in the winter, George C. Wolfe wanted the movie to be in the heat of summer, so it actually helped us tremendously. It also gave an authenticity to the sweating.

How did you manage the real sweat and the fake sweat you were creating?

The majority of the movie took place over the course of one day, so it was really a challenge to maintain everyone’s sweat level and to keep that continuity for all the actors. We made our own sweat which we could apply and reapply after each take. Because it took place in the heat we had to keep the actors dry and then apply sweat to them. Every actor had a point in the movie where they sweated more than at any other time. For instance, when Slyvester [Dusan Brown] had to do his solo piece, he obviously sweated more. When the band would argue with each other and were fighting they were definitely sweating more. The proprietors were always sweating because Ma was always threatening to leave. So everyone had their sweat highlight moment which we had to maintain and perfect the continuity of.

An interesting thing I learned from Mia Neal and Sergio Lopez-Rivera was how well DP Tobias Schliessler’s lenses worked on the various skin tones in the film. How does the DP’s choice of lenses play into your work?

Immediately from the camera test, I could see that Tobias’s lighting was superb. Usually, it takes a little time for all of us to gel, but he was spot on from the very beginning. He used a lot of very warm amber tones that are so flattering to African American skin. When a white person and a Black person are in a scene together usually one of them is compromised in one way or another, and usually, it’s the Black person. But that wasn’t the case with Tobias’s lighting. Viola Davis would be in the same scene as one of the owners and they were both beautifully, perfectly lit. He is just a genius with his lighting.

What kind of products did you rely on for this film, and how did you mimic what these characters would have had access to in the 1920s?

We actually used totally modern makeup. What people had access to in those days was primarily cornstarch with some cocoa powder added which made everybody horribly pasty and flat looking. Also, they used a lot of crushed berries for blush and lipstick. So no we did not use any authentic makeup of the time, but we matched it to look as authentic as possible. We stayed with colors of that era such as the berry shades, very waxy eyeliner, and stuff like that. We really tried to replicate the makeup of that era while still using contemporary makeup.

One of the main products I relied on for this film is an old trick from my beauty school days which is a hair creme called Vitapointe. When you apply it to the skin and spritz it with Evian it holds the droplets, so it looks like sweat. Whenever anybody was really sweating we used that because it could last for a whole take. Another product I relied on for the guys was Revlon ColorStay because it never needed powdering, and it looked most natural on the men.

How do you adapt your approach from one movie to the next? You’ve worked on big blockbusters and then more intimate films like this one and Fences. Are you shifting your methods, or is it more about modifying and scaling?

Every approach is decided by the written material. The script is our Bible. So whether you’re doing an action-adventure or a more intimate movie that’s an adaptation of a play, the approach is the material. For example, both Ma Rainey and Fences were plays written by the same author but dramatically different films cinematically. Every film really has its own signature depending on the costume designer, the DP, and the director’s choices. Every single project I come to with fresh eyes and look forward to that new experience.