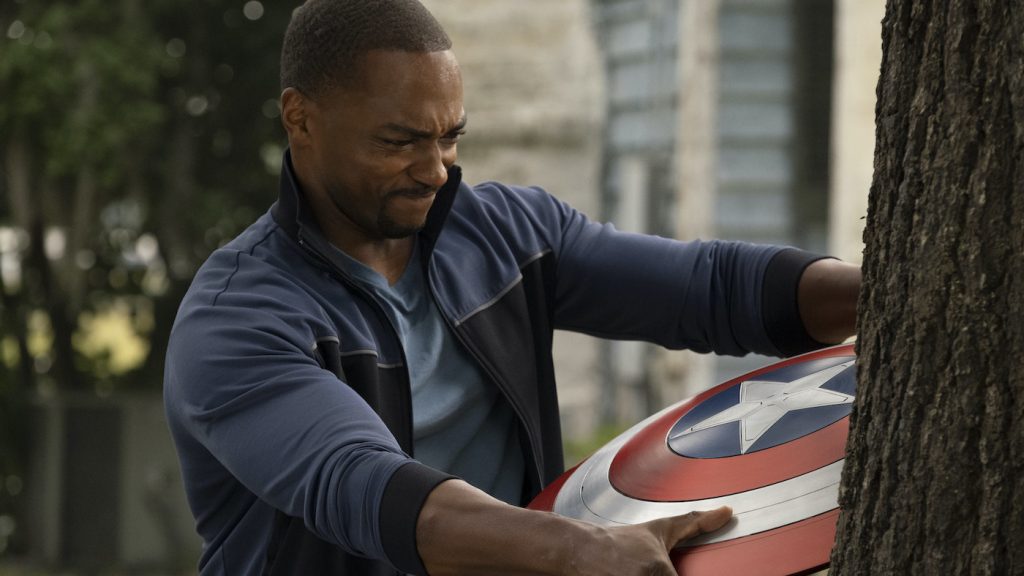 Last week we looked at the career of Anthony Mackie, the Falcon himself, who has been building to this moment for two decades now. The moment we’re referring to is starring in Marvel’s upcoming Disney+ series The Falcon and the Winter Soldier, which features Mackie’s high-flying Avenger Sam Wilson/The Falcon and Sebastian Stan’s tortured (and lethally effective) Winter Soldier as they deal with a world without Iron Man and Captain America. Now, Marvel has released a new video that tracks Falcon throughout the MCU, from the first time we met him in Captain America: The Winter Soldier through his heroic return in Avengers: Endgame.

You may have forgotten, but when first meet Sam Wilson, he keeps his abilities a secret—for a bit—from Steve Rogers. Sam was working at Veteran Affairs when he meets Steve while jogging around the National Mall in Washington D.C. Okay, to be more accurate, he watches as Steve blows past him several times while jogging. Anyway, soon enough Sam reveals his flying capabilities and becomes a major reason Cap is able to not only handle the Winter Soldier but also able to defeat a resurgent Hydra and a compromised S.H.I.E.L.D. From there, the Falcon officially joins the Avengers and takes part in the Battle of Sokovia in Avengers: Age of Ultron, protect the Avengers compound in the first Ant-Man, get Cap’s back in more ways than one in Captain America: Civil War, and, tragically, pay the ultimate price in Avengers: Infinity War—only to rematerialize in Endgame and help the Avengers finally end Thanos. So yeah, Sam’s been through it all.

Yet now, for the first time, Sam’s leading the show in The Falcon and the Winter Soldier. Until that series premieres on Disney+ on March 19, you can get your crash course in the Falcon’s involvement in the MCU below:

Marvel Studios’ “The Falcon and The Winter Soldier” stars Anthony Mackie as Sam Wilson aka The Falcon, and Sebastian Stan as Bucky Barnes aka The Winter Soldier. The pair, who came together in the final moments of “Avengers: Endgame,” team up on a global adventure that tests their abilities—and their patience. Directed by Kari Skogland with Malcolm Spellman serving as head writer, the series also stars Daniel Brühl as Zemo, Emily VanCamp as Sharon Carter, and Wyatt Russell as John Walker.

TAGSDisney The Falcon and the Winter Soldier Walt Disney Studios