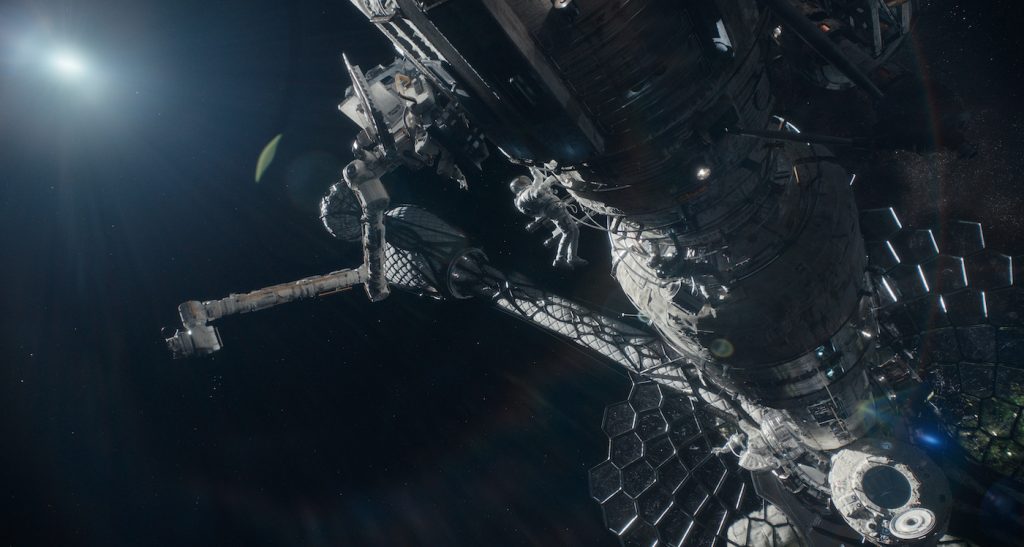 Production designer Jim Bissell landed ET: The Extraterrestrial fresh out of college. His latest, The Midnight Sky (now streaming on Netflix) marks a return to the realm of science fiction, but this time he’s forgoing adorable aliens to picture the end of the world as we know it. Director-star George Clooney plays astrophysicist Augustine Lofthouse, the last man on earth stranded in an Arctic observatory. Meanwhile, a crew of astronauts (including David Oyelowo and Felicity Jones) hurtles through the solar system in the Aether spaceship, eager to return home after years of intergalactic exploration. The film marks Bissell’s sixth Clooney collaboration including Good Night, and Good Luck, which earned him an Oscar-nomination.

Bissell, whose resume also includes Mission: Impossible – Rogue Nation and 300, joined The Credits from his home in Studio City, California to talk about The Midnight Sky’s gravity-defying spaceship, frosted beards in Iceland and the hyper-efficient design concept known as “topological optimization.”

Sci-fi movies usually depict spacecraft as fairly massive objects, but your ship has a different look. What’s the concept behind the Aether spaceship in Midnight Sky?

The design was prompted by George telling me “I don’t want this to look like a typical space movie.” I took that as my mandate, understanding that space movies have developed a visual language in films like Star Wars or Alien, you expect to see big, muscular ships. The Aether is more like a dragonfly. It’s an intricate, delicate structure designed to take care of its inhabitants on a long journey. So that’s where I started: How can we ground the design in some semblance of reality 25 years in the future?

Parts of the ship rotate continuously. Why is that?

Weightlessness is really hard on the human body during long term space travel and the only way to address that is through centrifugal force. That’s how we came up with the idea of this ship being shaped like a big baton spinning round and round. The two ends of this baton [which generate centrifugal force] are sleeping living areas that then spread out to the sleeping pods, where the gravity is strongest. As you move toward the ladder at the center of the ship, the centrifugal force becomes less and less, so at a certain point, they can abandon the ladder and just sail on into work. That’s their morning commute.

How long did it take to build this thing?

About two and a half months. Of course, we didn’t have time to build a real space ship, but we needed something that seemed feasible and also reflects the poetry of the script, which is sort of about end times. We decided to use expandable habitat technology manufactured by Bigelow Aerospace, so instead of the Aether being a steel-clad ship, it’s made of fabric.

That whole baton is actually layered fabrics. The only solid structures are the exoskeletons and the endoskeletons. 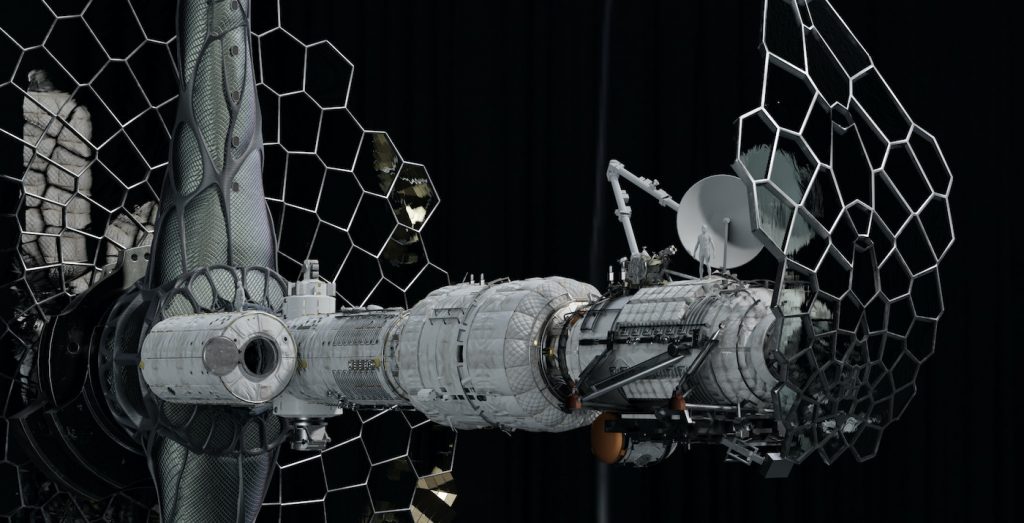 Yes. We imagined they’d be 3-D printed out on the moon using something called topological optimization, which uses computers to come up with the most efficient design. The best example of topological optimization is a tree. So the ship’s exoskeleton that looks so weird, like Gaudi on acid, would be used to wrap around these fabrics and hold them in, while the endoskeleton defines the flooring space and everything you see inside.

On the morning you walked onto the soundstage at Shepperton Studios and saw the completed structure, three stories tall, for the first time, how did you feel?

It scared the bejesus out of me, to be honest, because I’d gone so far away from the commonly accepted vocabulary of space travel. I didn’t know if people would get it. I didn’t know if they’d just go “This is just some kind of Hollywood mumbo jumbo bullshit.” I asked my college roommate in Atlanta who saw the movie at an advance screening earlier this month “Did you get what the ship was all about?” He said “No. But it looked cool!” [laughter].

The crew has been traveling through space for nearly three years and in that amount of time, earth has become uninhabitable. What happened?

It’s a dog pile. Global warming raised sea level causing mass migrations, Arctic thawing might have exposed new pathogens and probably somebody got a hold of a nuclear stockpile. Any number of different things could have happened to arrive at the same result.

The last man standing is George Clooney, alone in an Arctic observatory trying to communicate with the Aether crew. Where did you shoot the Polar icecap scenes?

We went to Greenland for two weeks and filmed on a glacier. It was real. And it was cold.

What did you want to achieve with those frigid locations?

We wanted to make you feel isolated in this very cold climate because it’s your portal into the interior of Augustine’s soul. He’s this cold, scientific guy just starting to get in touch with stuff he’s put on the backburner for his entire life. We picked stuff in Iceland that gave us the visceral imagery conveying this sense of atonement, as a kind of meditation on life, what’s important in life, what the end of life is really all about.

You also built an Arctic set on a Shepperton soundstage outside of London?

Right. We built this big interior exterior set so that George would walk outside his Arctic compound and you’d see the wind blowing and everything else. We filmed the beard [frosted in ice and snow] in Iceland, so makeup was able to duplicate what the beard looked like. When you go inside that set, it feels like you’re there in the Arctic Circle.

Since 2008 you’ve designed six movies for George Clooney. How did your collaboration begin?

I was going to do Confessions of a Dangerous Mind with Bryan Singer but then the whole thing blew up. Months later the producer called again and said “George Clooney wants to direct Confessions and he’d like to meet you.” I went “whoop de doo.” I remember thinking that I’d hate to see this property, which I loved, become a vanity project for a romantic leading man actor. But I went over to George’s house where we had a three-hour conversation. I was blown away because he was extremely knowledgeable. My enthusiasm lasted all the way through Confessions until they said “wrap,” which is the first movie in my entire career where I was sorry it was over. Because usually you’re just exhausted.

What do you most like about working with him?

The fact that he’s such an assured director. He has a good grasp of the material, he’s passionate about his movies and he thinks things through. Once I get a sense of what George wants, then I can bring ideas to him. He’s very open, so it’s a real collaboration and that’s exciting for me.

Your Midnight Sky environments help frame George Clooney as this melancholy figure who seems to embody some big themes. What do you hope audiences take away from Midnight Sky?

It’s about how fragile life is and how we have to pay attention. Because if we don’t pay attention, life goes away. It’s a lot more fragile than we think.