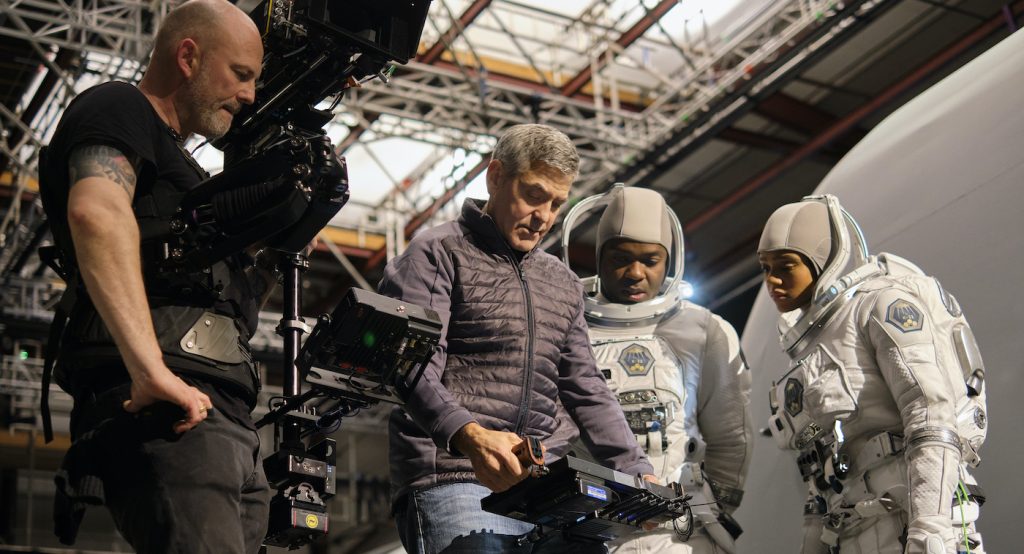 Based on Lily Brooks-Dalton’s acclaimed novel “Good Morning, Midnight”, the new Netflix release The Midnight Sky (streaming December 23), which is directed by George Clooney, follows scientist Augustine (played by Clooney) who navigates a post-apocalyptic world alone in the Arctic, while warning away Sully (Felicity Jones) and the other astronauts returning from deep space with her. Her fellow crewmembers include partner and flight commander Adewole (David Oyelowo), astrodynamics expert Sanchez (Demián Bichir), and pilot Mitchell (Kyle Chandler). The film’s end of the world scenario is grounded in realism, with a story that finds a balance between the isolated scientist on Earth and the astronauts returning home only to discover they may be some of humanity’s only survivors. The Credits spoke to actors Oyelowo and Bichir about working on Clooney’s latest project.

David, what drew you to your role of Ade?

I read the script and I just loved the world of it, because it was not only this giant sci-fi movie, it also had this social commentary in terms of how we were treating the planet, and also it had predominately a handful of characters we zone in on. I love the film Gravity, and I love that we have this huge backdrop but it’s largely centered on Sandra Bullock and George Clooney in that film. This is a similar thing in terms of dynamics, whereby you have the opportunity to get under the skin of these characters whilst also going into this massive existential threat that they’re facing.

Demián, what attracted you to playing Sanchez?

When George Clooney calls, for me that is an automatic yes, whatever the character is about. So when he invited me to be part of the cast, I was praying it would be good. Then I was lucky to find a fantastic script that was so well written by Mark Smith, and such a rich character. You don’t find many Mexican astrodynamicists up in space, let alone in Hollywood. That increased my will to jump into this spaceship and I’m very grateful and happy I did.

And how did you prepare or do research for your role, Demián?

You can learn anything from the internet. You’d be surprised. In the reclusion of the pandemic, I’ve been working on some music, and I’ve been doing it all only based on tutorials. You can learn anything from how to fry an egg to how to go to the moon. I’ve been learning about metaphysics and quantum physics and about Aristotle, and of course, all the research that we do is a help to the work. You try to cover as many bases as you can, so you have everything ironed out before going to set because that’s pretty much what any heavyweight director expects from you.

David, you all worked in mostly practical sets and with costumes based on those designed for NASA. How did the aspects of practical space and design impact your portrayal and interpretation?

It’s always incredible to have actual, tangible things to act opposite, and the great thing about the space station in this film is that it was built in exactly the same way it would be in space, in three tiers. When you see us climbing up stairs, it’s not all these tiers next to each other, it actually goes up three stories, so you felt like you were in an environment that was very organic, tangible, and very believable. Obviously, we weren’t actually in space, but the immediate environment we were in was what it would have been, and that was really really helpful. I think that is a byproduct of having an actor as a director. He knows just how helpful it is to not always have to rely on our imaginations, and so he created that environment for us.

David, your character and Felicity’s explore questions of creation and destruction. How did you approach that aspect of the story, especially as Sully and Ade are not particularly verbose.

The thing that I also love about The Midnight Sky is it allows the audience to draw their own conclusions. It’s not a bunch of dialogue. It’s a cerebral, thoughtful, grown-up sci-fi movie. Even though we are having a child together, it’s not something that we expound upon a huge amount. It’s not a lovey-dovey relationship, it’s very much a mature grown-up professional relationship, but it doesn’t shy away from the fact that there is creation in the form of a child. That was actually an aspect of the film that wasn’t originally in the script. Felicity Jones happened to be pregnant and we beautifully were able to add that to the narrative. But the destruction of our planet is a huge part of the reality of this film, and that for me was one of the things that I love about it. You can only take care of the things that are tangible and in front of you. He can he protect the woman he loves, and this unborn child, and how can he try to protect his crew, and try to fulfill this task of having found this planet to colonize for humanity, but what do you do with the fact that the world is probably on the verge of destruction? And at the same time, we are in a pandemic, and are all looking at our TV screens saying ‘what the heck?’  That is also a reality that these characters face in this film as well.

Demián, the film in a way is about the best and the worst of humanity. You are quoted as saying humans are fantastic and terrible at the same time. How do you work with that duality as Sanchez, and as an actor bringing yourself to the story?

I think we all deal with that daily, especially now in the last 10 months. It has been very clear that we are capable of fantastic phenomenal things for humanity, and I’m speaking about the doctors and nurses and every worker in every hospital around the world. That’s the best in humanity. I also think art and science and sports are the best of humanity. That’s what represents us better. Every human being, whether you’re an artist or not, we have that in our blood. We also have our demons, our dark sides. I think the trick, and that is exactly how I dealt with it in this story, is that you can’t bring your demons out if they will affect everyone else, so whatever happened in your life in the past, you need to deal with that yourself. You cannot bring that into anyone else, not your wife, kids, neighbors, or your fellow citizens. I think that’s very clear in the story in such a small crew, we are so different among us, and at the same time we know we are the same species as human beings, and we depend on each other, and that’s why we take care of each other.

David, in the time of a pandemic, what can we take away from The Midnight Sky?

You see in George Clooney’s character someone who is living with a lot of regret because he sacrificed connectivity for ambition. It’s an ambition that’s admirable because it’s for the sake of humanity, but he lost out on his own familial connection. I do believe you can have both. As a father of four who is a very busy actor, I’m very busy with my wife and kids as well. Human and familial connection and love as a point of connection are essential. Now more than ever we are seeing how much we need each other, and that is the thing to prioritize over almost everything else.

Featured image: THE MIDNIGHT SKY (2020). Director George Clooney on set at Shepperton Studios with David Oyelowo and Tiffany Boone on the set of The Midnight Sky. Cr. Philippe Antonello/NETFLIX ©2020