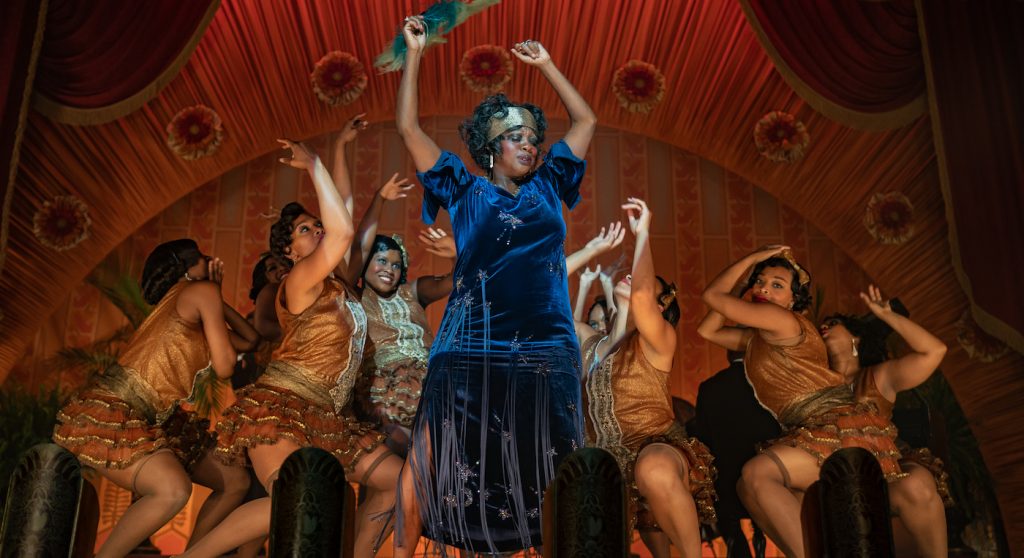 During the course of Ma Rainey’s Black Bottom, based on the 1982 play by August Wilson, blues star Ma Rainey (Viola Davis) reveals the lengths it takes to counter the racial economic exploitation of the 1920s, while down in the practice room, her band members recount the horrors of Jim Crow. The film, directed by George C. Wolfe (The Immortal Life of Henrietta Lacks), which debuted on Netflix on December 18th, is the first of an ongoing project to produce film adaptations of all of Wilson’s 10 plays focused on Black life in different decades throughout the 20th century, collectively known as the Pittsburgh Cycle. Both Wilson’s play and the film adaptation are inspired by Ma Rainey, a 1920s blues star, with the original Ma Rainey’s Black Bottom one of the singer’s hits.

Though Wilson grew up in the city’s Hill District, “of all his plays, Ma Rainey, strangely enough, is the only one that doesn’t take place in Pittsburgh,” said production designer Mark Ricker. Nevertheless, the film was shot in the city, on stages built into a former steel factory and on two city blocks dressed to look like 1920s Chicago. These three sets are where the vast majority of the film takes place. “The source material is a play, and [with] the film version of the play, I think it was always in the back of my mind to create an environment that worked for that,” Ricker said. As such, he worked to create sets that were authentic to the period and looked like rooms where viewers would themselves want to spend time, but which otherwise took a backseat to incredible performances by Davis and the late Chadwick Boseman, who plays Levee, Ma’s youngest and most outspoken band member. Viscerally, Ricker designed the basement band room and spacious but spare recording studio to feel “slightly recessed,” he said. “We created textures that were interesting, but I hope didn’t distract from the words and what the actors were doing.”

Upstairs, Ma arrives late, insists on having her nephew Sylvester (Dusan Brown), who stutters, introduce one of her songs, and brings the session to a halt to have a few of the guys go out and get her a coke, “ice cold.” These are not the whimsical actions of a musical diva, however, but thought-out tactics to forestall economic exploitation on the part of her manager, Irvin (Jeremy Shamos), and the studio owner, Sturdyvant (Jonny Coyne). Downstairs, in the practice room, Levee brightly needles his older bandmates, but when their teasing in return goes too far, all levity evaporates, with Boseman delivering a devastating monologue recounting the horrors of Levee’s childhood. Levee isn’t alone in his nightmare experiences at the hands of racist Southern whites, and as the guys go back and forth between the recording studio and the band room, further tails of oppression, violence, and abuse come out, with more to come by the end of the day. The sets where these conversations take place look continuous but aren’t, with Ricker elevating the studio and adding steps, then matching them in a stairwell, so it appears much of the band’s day is spent trundling back and forth between the practice room and the studio.

Neither upstairs nor downstairs could be described as luxurious. Ricker and Wolfe felt that the entire space should look as if the studio owners had built it into the rear corner of a factory. As such, Ricker built the practice room into the corner of the soundstage, in order to incorporate some of the steel factory’s original brick into the floor, and the camera team made it work. Upstairs, “the booth itself in my mind was once a manager’s office that peered down onto whatever was happening,” said Ricker. “As we’re going, our research showed that the studio Ma Rainey had recorded with had actually been a chair factory, so we sort of landed in the right place there.”

Outside, a fender-bender first heralds Ma’s arrival. Ricker and his team found an architecturally accurate two-block stretch of the Hill District, dressed it with billboards, awnings, and graphics, and entirely constructed an alleyway that leads between the street and the studio’s door. Beyond the area outside the studio, “visual effects did their magic to extend the street and put the skyline in. I thought they did a brilliant job with that. I owe them a debt of gratitude,” Ricker said.

Though it may be for very different reasons, everyone truly wants to record, and we finally see this in action on a period-accurate, functioning record pressing machinery. “That was one of the very first things that I looked into, because I had done a fair amount of recording equipment on the James Brown movie, but nothing as early as the 1920s,” said Ricker. His set decorator found someone in Los Angeles recreating the machinery, and even brought along some original Ma Rainey recordings to play on set. To turn the machine, “there’s a giant brass weight that you see going down at one point,” said Ricker, which takes three and a half minutes to hit the floor — “still the standard for the length of a song. That’s where it all came from.”

It’s possible those kinds of details might be lost on viewers focused on Davis’s embodiment of Ma, the film’s immersive music, and the late Boseman’s magnetic turn as Levee. Ma Rainey’s Black Bottom was the production designer’s third project with Davis and his second with Boseman, and “to have a front row seat to see what both of them do, I count myself extremely lucky to do what I do and work with the talent they bring.” As for the music itself, Ricker described the first time hearing the band perform, in Ma’s traveling show tent which opens the movie, as a kind of magic. “It was one of those nights when you’re on set that you felt like you were there,” he said.