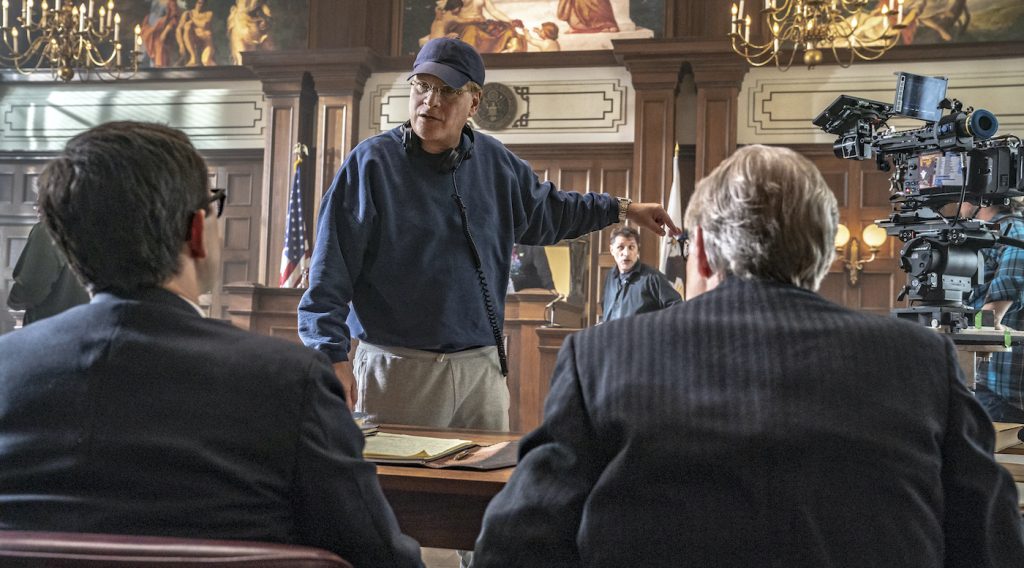 When writer/director Aaron Sorkin started writing The Trial of the Chicago 7 over 12 years ago, he had no way of knowing how his script based on a real-life conspiracy trial for men accused of inciting riots during the 1968 Democratic Convention would parallel current events in 2020. Now, his film is set to premiere on October 16th on Netflix, only weeks before the most important election of our time. His sophomore directorial effort following the success of 2017’s Molly’s Game features a stellar ensemble cast that includes Eddie Redmayne as Tom Hayden, Sacha Baron Cohen as Abbie Hoffman, Mark Rylance as defense attorney William Kuntsler, Joseph Gordon-Levitt as prosecutor Richard Schultz, Frank Langella as Judge Julius Hoffman (no relation to Abbie), and Yahya Abdul-Mateen II as Bobby Seale.

The Credits spoke to Sorkin about his timely new film, working with this impressive cast, and more. This conversation has been edited for length and clarity.

What did you learn in working on Molly’s Game as a first time director that aided you most on The Trial of the Chicago 7?

I think the biggest thing that I learned was to not give up on a take. On both films, I was very conscious of the schedule. We were trying to fit into a tighter budget than would have been preferable. On Molly’s Game, too often I felt like, “That’s as good as that’s going to get. Let’s move on.” It’s something I did less on Chicago 7. But also I’m somebody who in almost 30 years of being a professional writer managed to pick up none of the science of filmmaking. I picked up a little bit of that working with two great cinematographers, Charlotte Bruus Christensen on Molly’s Game, and Phedon Papamichael on The Trial of the Chicago 7. I think I also learned what I like. I’m becoming more visually aware. Honestly, as a writer, for me it was all about “Does it sound right?” I would watch episodes of The West Wing or the first cut of The Social Network with my eyes closed, just listening. You can’t do that when you’re directing. I would like to go back into each scene in Chicago 7 and just add some element of texture to it that I should have added before. I’ve just become more aware of things like that, and hopefully, I’ll be better with the third movie.

How has being a director influenced your writing?

Well, in neither case, Molly’s Game or Chicago 7, did I know that I was going to be the director when I was writing it. That said, I tend to do a lot of directing in the screenplay. I don’t mean that I write a lot of stage direction, I don’t. Just to say when a scene is written, it’s a pretty good instruction manual for how to make the film. I don’t mean to diminish what directors have done with stuff that I’ve written, because Dave Fincher with The Social Network, and Danny Boyle with Steve Jobs, and Bennett Miller with Moneyball, they’ve done phenomenal things. I can tell you that as soon as I know that I’m the director, I go back through the script and think, “Ok, now you have to know where you’re putting the camera. Now with this huge riot scene, it’s not someone else’s problem. It’s yours. You’re going to have to figure out how to shoot this.”

This is your first true ensemble cast as a director. What elements did you enjoy or find challenging about ensemble direction?

What I thought was going to be challenging was managing egos. The fact is most of the actors in this movie are used to starring in their own movies. Every day on the shooting schedule was their big scene. In this film, there would be days in a row when movie stars, Academy Award winners, were essentially the highest-paid extras in town, even though they weren’t very well paid. It turned out it wasn’t a problem at all, because they understood that on those days, they weren’t extras. There was an importance to the coverage, like the power of Bobby Seale’s look at the judge, and the heartbreak of Jeremy Strong when this undercover FBI agent who he still has a crush on is taking the stand. More than that, everybody was there for each other. Everybody was incredibly supportive. It was a sight to see, it really was. I felt like when I’d come to work in the morning that somebody was tossing me the keys to a Formula One racecar, and all I had to do was not put the car in the wall, and these guys were going to win the race.

Did you rehearse? How did this mix of theater and film actors come together?

We had to put every nickel of this budget on the screen, so I had to get tricky with rehearsal. I started rehearsal with the cast online, virtually, talking through Zoom, a month or so before shooting, just talking to them about various things, making it clear mostly that I was not looking for a physical or vocal impersonation of the character that they’re playing, except for Abbie Hoffman, where he has such an iconic look and voice, and his accent is a hybrid accent of Boston and Brooklyn that’s kind of an Abbie Hoffman accent. Otherwise, I told them not to worry about looking or sounding like the people they were playing but to play the character that’s in the script, not the character that’s in a YouTube video they found doing a speech. Play the character in the script. That’s what we started talking about virtually.

And then when you began filming?

We had to go to Chicago first to shoot the riot scenes, so there wasn’t a lot of dialogue happening there, it was mostly physical stuff. There were a couple of dialogue scenes, and we’d start at 6 o’clock in the morning, rehearsing them, an hour or two of that, then they’d go away to hair and makeup, the scene would get lit, the actors would come back, and I’d stage it with Phedon, the DP, so that we could talk about what shots we’d get, and then we’d go for it. We’re shooting rehearsal, basically, and then we’d go until we’d get that great take. When we’d get that great take, we’d move on.

Given the current state of affairs, anyone who feels called to activism could see themselves in one of the Chicago 7.

I hope you’re right. I hope that people who are activists, or people who have the heart of an activist, but maybe their body hasn’t gotten caught up yet, will see in this film that this is a tribute to them. I hope they’ll see themselves honored, and feel inspired by the end of the film with Hayden’s final act of defiance, knowing these guys won’t be beaten.

For more on The Trial of the Chicago 7, check out our interview with editor Alan Baumgarten.

TAGSDirector Interviews Netflix Screenwriter The Trial of the Chicago 7